Cooler Than The Other Side Of The Pillow

Genius casting and a marvelous alchemy between its stars propel director/writer Michael Kloves’ debut into rarefied air. The Fabulous Baker Boys casts Jeff Bridges and Beau Bridges as brothers in a failing piano lounge act. Their world is turned upside when they meet the sultry Susie Diamond, unforgettably played by Michelle Pfeiffer.

The signature performance of her career, Michelle Pfeiffer melts your heart and screens everywhere in the sparkling drama. With a polished wit and smooth elegance which spontaneously emerges from the sharp screenplay, The Fabulous Baker Boys is a thoroughly entertaining and rewarding gem.

The Fabulous Baker Boys is a thoroughly entertaining and rewarding gem

Frank (Beau Bridges) and Jack Baker (Jeff Bridges) are brothers who have performed together for years in a cheesy piano lounge act, barely making it. Frank is married, the responsible brother who manages their business affairs. The younger Jack is gifted with natural music talent but plays second fiddle, allowing Frank his space to run things and keep the money rolling in as shows start drying up.

Desperate to juice interest in their tired act, the brothers audition a string of terrible female singers. They strike gold with the sizzling Susie Diamond, a former call girl with an amazing voice. Now touring with her from city to city, deeply recessed feelings between the brothers are dredged up when Jack and Susie inevitably draw closer. The brothers’ long-standing partnership may not survive the new addition.

It’s hard imagining anyone else besides these three stars bringing the same energy together. The trio absolutely make The Fabulous Baker Boys what it is, an inspired movie with undeniably appealing characters. Michelle Pfeiffer may have never been more sexy than her turn as Catwoman in Batman Returns but she oozes seductive appeal here as a beautiful songbird with some rough edges.

It’s an amazing acting performance by the star which produces a fully three-dimensional character, combining a tender vulnerability with a tough underbelly. Many consider this role her best in a long and successful career.

There may be no cooler character than Jeff Bridge’s Jack, a laid-back piano player who effortlessly exudes charisma and a lovable charm. Jack may be looking for something more than a mere fling. It’s a perfect foil in the romantic dance between Jack and Susie. The two have palpable chemistry and their romantic connection is off the charts. Only Jeff Bridges could calmly muster the understated demeanor and suave ruggedness needed to pull off an enigma like Jack.

The Fabulous Baker Boys sucks you into its world of cheap lounge acts with a passion and satisfaction only truly endearing characters handled by world-class actors can produce. Casting actual brothers in the lead roles was a stroke of genius and Michelle Pfeiffer’s seductive screencraft is pure Hollywood magic. In a neat side bonus, that is her singing in the movie. 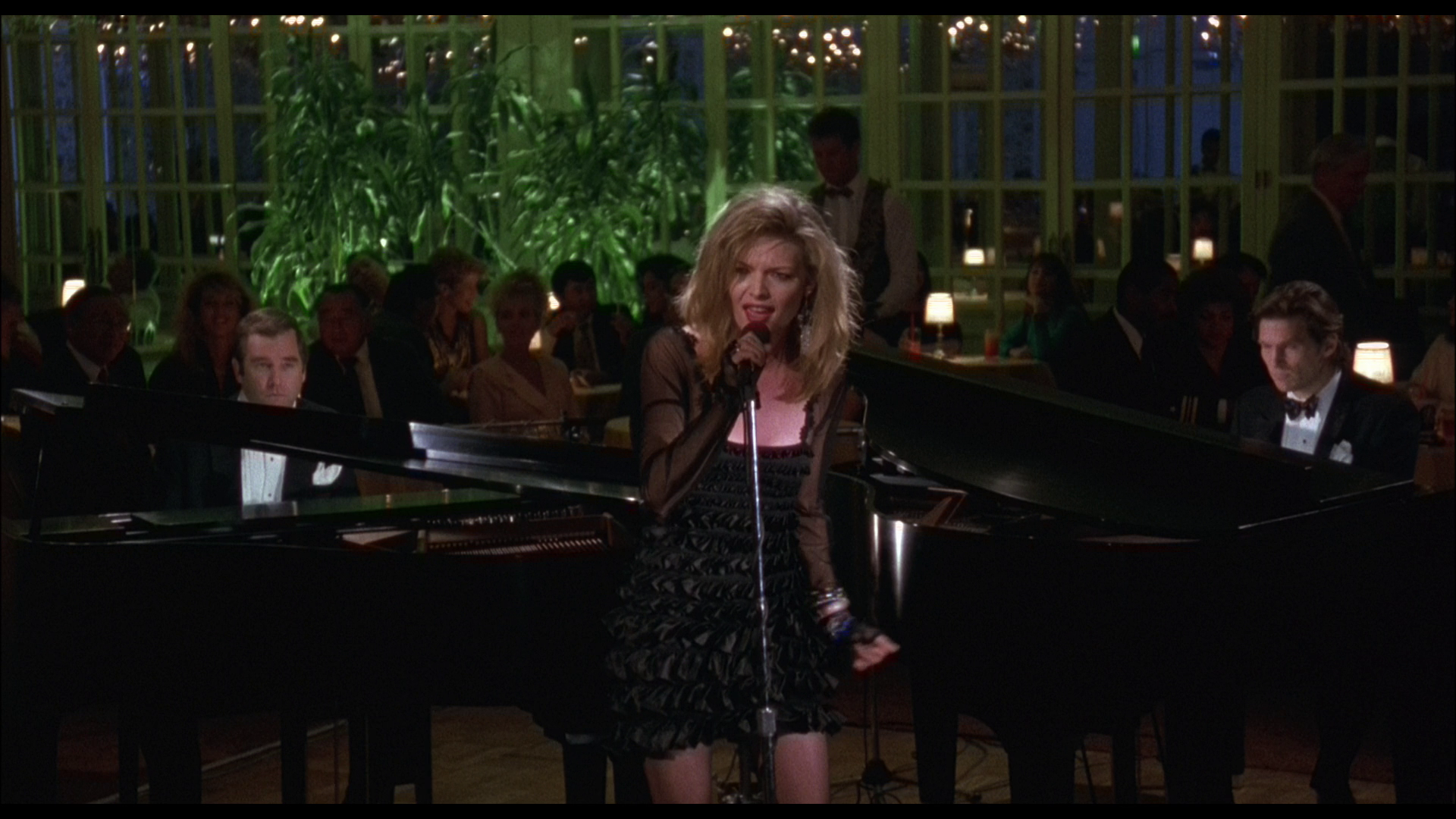 Owners of the previously issued Twilight Time BD shouldn’t expect any visual differences with this new Blu-ray put out by MVD. Both feature the same 1.85:1 transfer, likely struck in the early 2010s by MGM. A little grit and softness are the only complaints on an otherwise film-like scan made from fairly healthy elements. Definition and clarity are decent for the slightly dated image harvest. The 1989 production turns out rather nicely in 1080p video.

The unfiltered transfer exhibits occasionally impressive fine detail. The moody cinematography by Michael Ballhaus is driven by smoky lounge rooms and darker night clubs, so it’s more cinematic than sheer eye candy. Flesh-tones are slightly washed out, if anything.

While I’d love seeing The Fabulous Baker Boys receive a new 4K transfer, this is a quality HD presentation with few downsides.

A touch light on bass, fidelity is perfectly serviceable for the sprinkling of light piano and softer jazz heard throughout the movie. The movie’s sound design smoothly integrates occasional effects with a natural ambiance.

Optional English SDH subtitles play in a yellow font. An isolated music & effects track can be heard in 2.0 PCM audio.

MVD mostly reissues the out-of-print disc from Twilight Time, throwing in a few archival featurettes left off their version as an added bonus. The disc is coded for Region A and arrives in a clear case with a slipcover available. This is easily the most complete and best home video release for The Fabulous Baker Boys while sharing the same A/V quality of the Twilight Time disc.

The critically acclaimed film sees an incredibly slick Jeff Bridges performance and a ravishing Michelle Pfeiffer light up the screen in this bittersweet conflict between brothers.