Child’s Play 2 does what any slasher sequel should, giving the killer more personality, bringing the kill count up, and finding a method to resurrect the now famed murderer. It’s also brighter, more colorful, but blander as the creative ingenuity is gone.

This is all Andy Barclay’s (Alex Vincent) story, the camera kept low in a Spielberg-ian trick and Barclay’s world doused in striking primary hues. He’s a good kid who, even after being blamed repeatedly for things he didn’t do, maintains his composure. At this young age and knowing the truth, Barclay still understands, accepting the adults won’t understand.

All of Child’s Play 2 is mimics a kid’s perspective. More than just a playground-like factory – as a kid might imagine such a place – characters play into childhood cliches too. A jerk stepdad and a rude teacher look and feel plucked from a Nickelodeon sitcom. Horror isn’t relegated to stabbings or choking, but the hopelessness as innocence drains from Barclay’s psyche.

Child’s Play’s original spark preyed on the panicked holiday shopping felt by so many parents; that’s a notably adult concept. This sequel drops that pretense, quickly introducing then dismissing corporate irresponsibility to bring knife-wielding doll Chucky back to life. From there, it’s havoc, the sometimes absurd kills a regularity whether in a school or an orphanage.

What results is a sequel pandering to a younger target audience as if a direct response to censor-happy advocacy groups angered over Child’s Play, while simultaneously taking a nastier, more aggressive tone with Chucky. His abrasive chatter puts the dimunitive Chucky alongside Freddy Krueger whose own caustic speech drove that franchise’s countless sequels.

It’s fun though in that hokey genre sequel way where viewers wait around for the doll to do stuff, expecting little else. Scripting doesn’t add to Chucky’s lore, playing up bits of Frankenstein and Pinocchio in obvious ways, retelling classics while directly acknowledging the inspiration. Child’s Play 2 isn’t out for inventiveness, just splatter. In that, it provides. 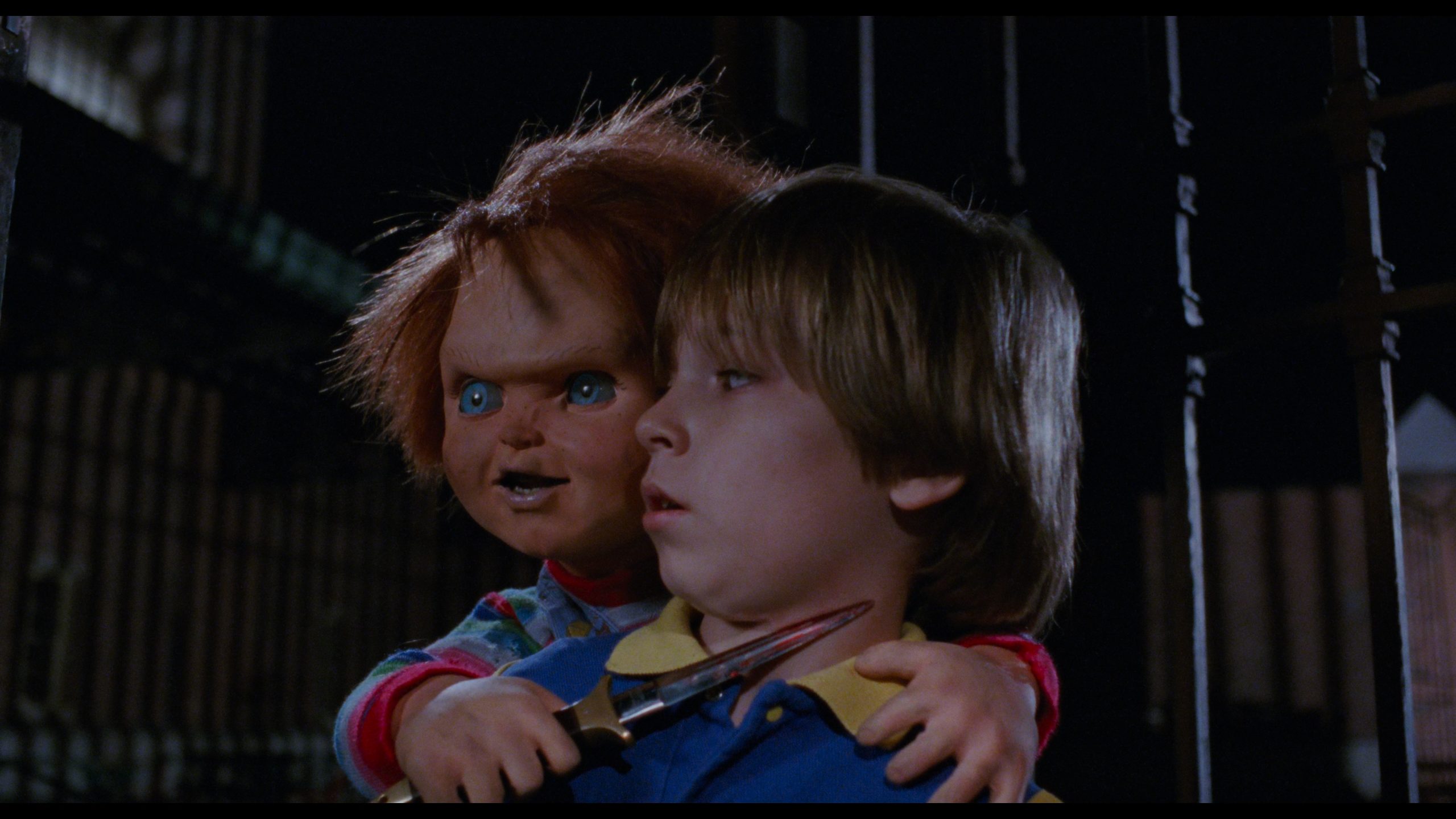 Scream/Shout debuts a gorgeous new master for this sequel, the resolution bump over the Blu-ray notable. Texture is a constant, defined precisely whether at distance or in close. Facial detail looks spectacular. Sharpness rarely wavers behind an easily resolved grain structure.

Child’s Play 2 is far more colorful than its predecessor, saturation substantially increased with spot on flesh tones and vivid primaries. Dolby Vision doesn’t hold back in revving up the variety.

Generous black levels do their job. Elegant shadows hit their mark dead on, pure black frequently and consistently. A light bump to the highlights add some spark to light sources, whether a neon sign or car headlights.

While the Atmos mix exaggerates the surrounds (and an included DTS-HD stereo track is more natural), the refreshed audio does work well. A thunderstorm spreads rain around, through the heights and rears. That’s natural ambiance. Action doesn’t hold back as much, filling each channel with limited separation. Bass isn’t much to speak of at all.

While all about the kills, Child’s Play 2 at least employs a smart perspective while the murder spree breaks out.