The ‘84 ruling led to holiday fanaticism, a cultural shift causing Cabbage Patch Doll chaos, of which Child’s Play so brilliantly employs as its central plot device. Karen Barclay (Catherine Hicks), like any good parent, wants to keep her kid satisfied, buying the hot toy from an alleyway reseller. Countless caregivers likely did the same as Cabbage Path mania led to supply shortages.

Andy (Alex Vincent) loves his Good Guys doll – the TV told him to. Good Guys clothes, Good Guys tools, Good Guys hats, and Good Guys cereal; Andy wants or has it all. A few years prior, this wasn’t possible.

Child’s Play’s dark hilarity skews that commercialized need into a fun, fast slasher flick, where that desire to please a kid with material objects works against not only the adults, but the target audience too. Both mom and son are affected, almost equally, by this Saturday morning profiteering, giving Child’s Play a nuance lacking in competing genre entries like Friday the 13th.

Gremlins did this too to an extent, and more immediate to the FCC’s ruling. Yet Child’s Play has the opportunity to absorb what the after-effects were, using them as plot devices. Andy’s incessant need for more material (he shows disappointment when Good Guys’ cartoon is a repeat) ruins the character’s natural innocence. He’s a victim before he’s ever attacked, and eventually institutionalized for what the adults see as an out-of-control obsession. In the end, the mother must physically protect her child from this figment of media marketing.

Better still, Child’s Play is a technical accomplishment, from the rod puppetry to the daring interactions with the actors. Editing hides the seams, but the illusion is maintained – Chucky, embodying a serial killer’s soul, moves sluggishly, like a cheap overseas doll might were it brought to life. Add in Brad Dourif’s sinister voice work, and Chucky gained a much deserved iconic status.

If anything is at fault, Child’s Play sticks to a serious tone rather than aiming to lampoon the content. Later sequels saw the chance and ran with it (as if there were another potential direction to take a franchise centered on a spiritually cursed, two-foot murder toy other than comedy). The scares work though in this memorable original, and clearly, Chucky left a lasting impression. 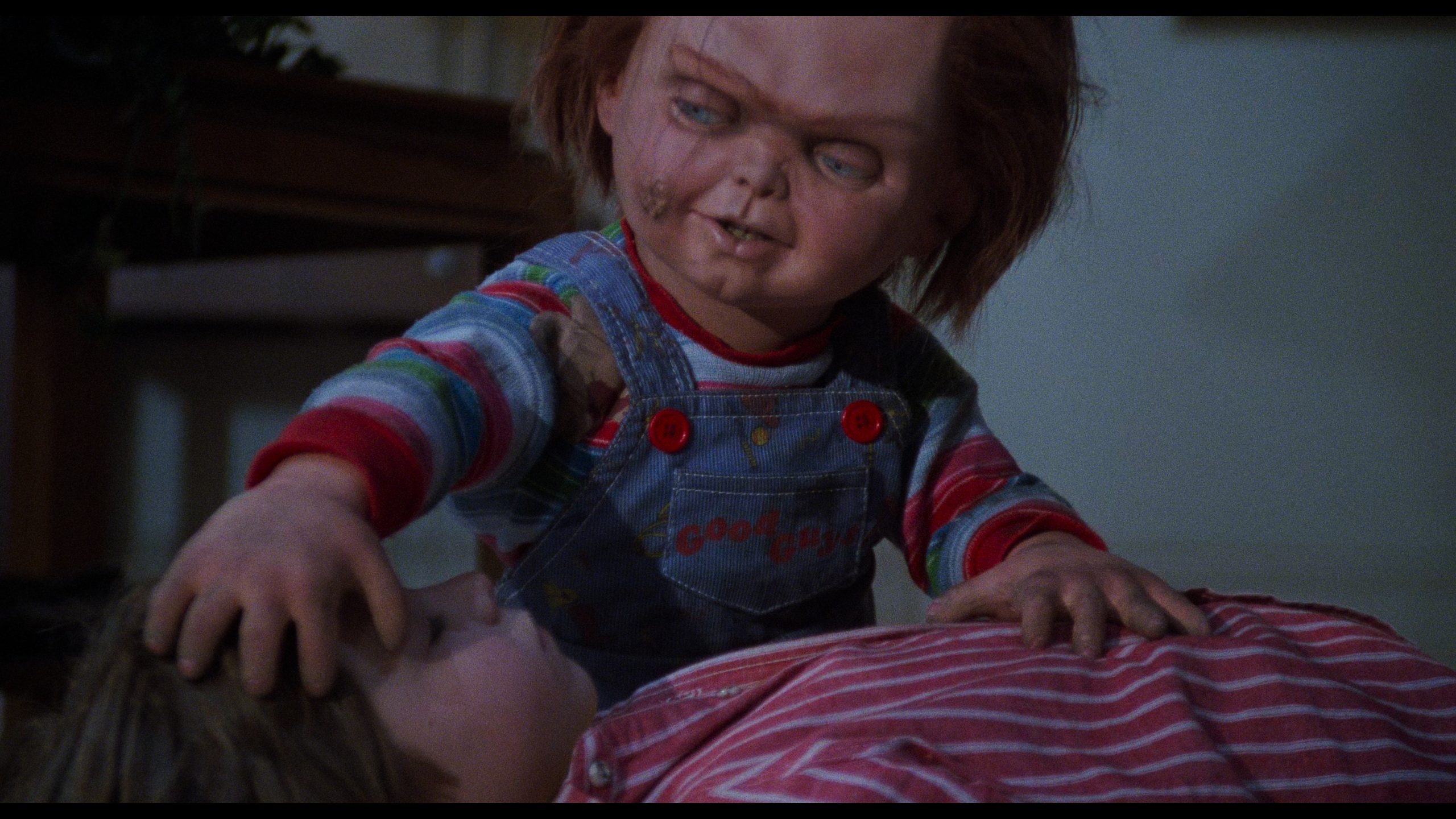 Shout/Scream debuts a fresh, pristine 4K scan for this UHD release. It’s fantastic. Child’s Play features a high-grained film stock that varies in intensity. Encoding struggles in places, leaving some artifacts, although minimally so. Typically, this is a consistent transfer, given plenty of disc space to keep the bitrate high.

Resolution pushes detail aplenty, although Child’s Play looks slightly diffused in the cinematography. That keeps pure fidelity low. Still, plastic texture on the Chucky prop does show through, including some facial definition on the actors too. City exteriors excel too.

Dolby Vision doesn’t do wonders for the material, especially in regards to black levels. They remain on the duller side, a bit murky and brown. Certain highlights gain prominence like neon signs dotting the city’s shopping center. Child’s Play stays rather flat across the numerous interiors, with few opportunities to shine. Color pops in places, especially reds on Andy’s snowsuit. Saturation is appreciable, if moderate compared to other films of this age.

A new Atmos mix joins the DTS-HD 5.1 and stereo tracks. For the new mix, the intro utilizes every speaker. Overheads activate to place the lightning. An explosion creates a small, dated rumble, then spreads debris outward. It’s effective. City ambiance lets subways spread around the surrounds, along with police sirens. Chucky’s pre-kill scares knock a few items around in the rears, enough to naturally extend the soundfield.

Three discs, because Shout/Scream Factory isn’t short-changing this release. On the UHD, all three commentary tracks offered previously, including a scene specific one by “Chucky” himself. These tracks also appear on the first Blu-ray. The latter disc includes new interviews with director Don Mancini, producer David Kirschner, production manager Robert Latham Brown, and a dual piece that brings actors Chris Sarandon together with Alex Vincent.

The third disc includes bonuses from previous releases, including a few skippable EPKs but also superb effects footage from the set, older featurettes, an interview with suit actor Ed Gale, and others.

A clever, lasting satire on Saturday morning TV and toy culture, Child Play’s ludicrous premise holds up because the theme is so ingrained.