And Even More Tomorrows

“Edge of Tomorrow does not have an off switch until its conclusion forces one. The idea doesn’t allow it, and instead lets the alluring action design open up because who cares if the lead character dies? It’s a gift for those who view Tom Cruise vehemently; he’s shot, stabbed, eaten, crushed, broken, and treated worse than a rag doll in a two-year-old’s smash happy hands.”

From a gorgeous film stock, Warner’s encode easily resolves the grain structure in this 4K debut. That’s a huge bump over the Blu-ray, which suffered from a meager bitrate. The HDR pass helps things along, elevating the contrast richly, especially giving fireballs vividness. Flames shoot up, their highlights intense. Shadows excel too, easily hitting pure black where needed and staying there.

Superb resolution suggests that although Edge of Tomorrow was originally finished at 2K, Warner appears to have gone back and rescanned the source. The precision definition and detail suggest as much, aside from the digital effects that remain on the softer side by their nature. Facial definition soars in close, and wide angles display superlative clarity. Any upscaling in the effects happens perfectly, no aliasing to note.

Choosing a flatter color palette, the grading appreciates a consistent teal, robbing flesh tones of their organic hue. That’s intent, not a fault. The disc does its duty like a soldier, preserving the material as is. 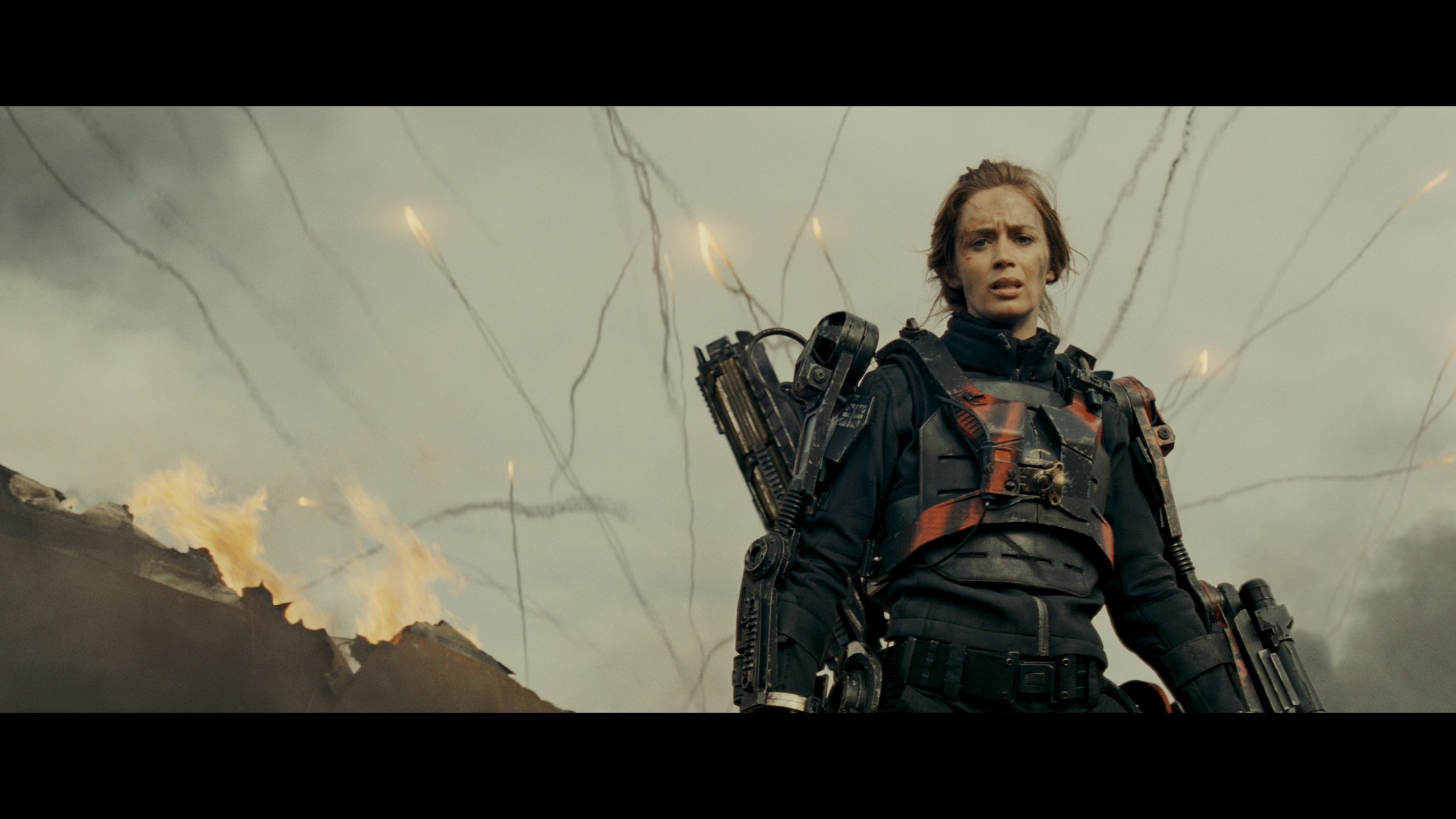 Arguably one of the most anticipated Atmos remixes on this format so far, Edge of Tomorrow is an absolutely beastly audio track. It’s brutal from the outset, throbbing and rumbling the low-end brutally, choosing zero restraint. Action scenes erupt, missiles exploding, guns firing, and metal machines slamming into aliens. Transport jets blast their engines whether the camera is external or internal. Edge of Tomorrow deserves maximum volume, and anything less is defeating the point.

Heights find plentiful use, masterfully placed as if always part of this design. This is on top (literally) of the original reference grade 7.1, bringing even more space to an already flawless home theater demo. The way bullets, missiles, and debris fill every speaker puts this disc among the absolute elite, and an essential upgrade over the Blu-ray for audio alone.

Warner includes all bonuses from the original Blu-ray – on the included Blu-ray. While many of the bonuses feel pulled from the realm of EPKs, there is a definite winner in On the Edge with Doug Liman. While the praise is high, this 42-minute look at Liman’s work behind-the-scenes is often fantastic. Detail and dedication are on display which paints Liman as a filmmaker focused on small details and creativeness.

Operation Downfall cuts together the beach invasion as a single piece (it’s split up in the movie) with full 7.1 audio support. Joining it is Storming the Beach, a nine minute piece on putting together said beach scene. Weapons of the Future details the struggles of making practical suits and the weapons included on them. Creatures not of This World is all alien-based, with a series of deleted scenes following up. All together, this pairs up for a touch over a half hour.

A clever twist on both war and sci-fi, Edge of Tomorrow still looks spectacular amid a brainy, entertaining concept.