Safe Men might be the quietest mafia movie ever made. Offbeat, unassuming, casual comedy, Safe Men rarely rises above a whisper, choosing a soft tone over anything abrasive in spite of the stakes.

Like the Dumb & Dumber duo, Sam Rockwell and Steve Zahn play their parts with little fear in this greater crime caper. Inadvertently drawn into a safe cracking scheme, the two (awful) lounge singers go with what they’re given by a Jewish mobster who accepts their idiocy as masculine chest puffing. That interplay saves Safe Men.

While the lower volume is appreciated – especially against ever louder comedy in the late ‘90s – Safe Men never finds tonal variance. It exists in an energy-sapping, pace lagging mid-tone that doesn’t command attention. Like their lounge singing career, Rockwell and Zahn play their parts as if meant for a background distraction rather than a focused act.

It’s odd as Safe Men increases in absurdity. People go up in flames because of defective pants. The caper leads to thieving the Stanley Cup. Rockwell and Zahn stare down a gun as the threat to their lives grows. Safe Men knows its funny that no one seems to grasp this farcical criminality – and it is. Caught mid-act cracking a safe by a rich man’s daughter, the conversation by Rockwell plays out as if shared over cocktails. Then, a romance blooms, equally low-key.

When Safe Men demands focus on its wacky story, it’s earned. Unfortunately, that’s a rarity, and Safe Men is happy to exist in a murky, sluggish zone with everyone directed to stay monotone. 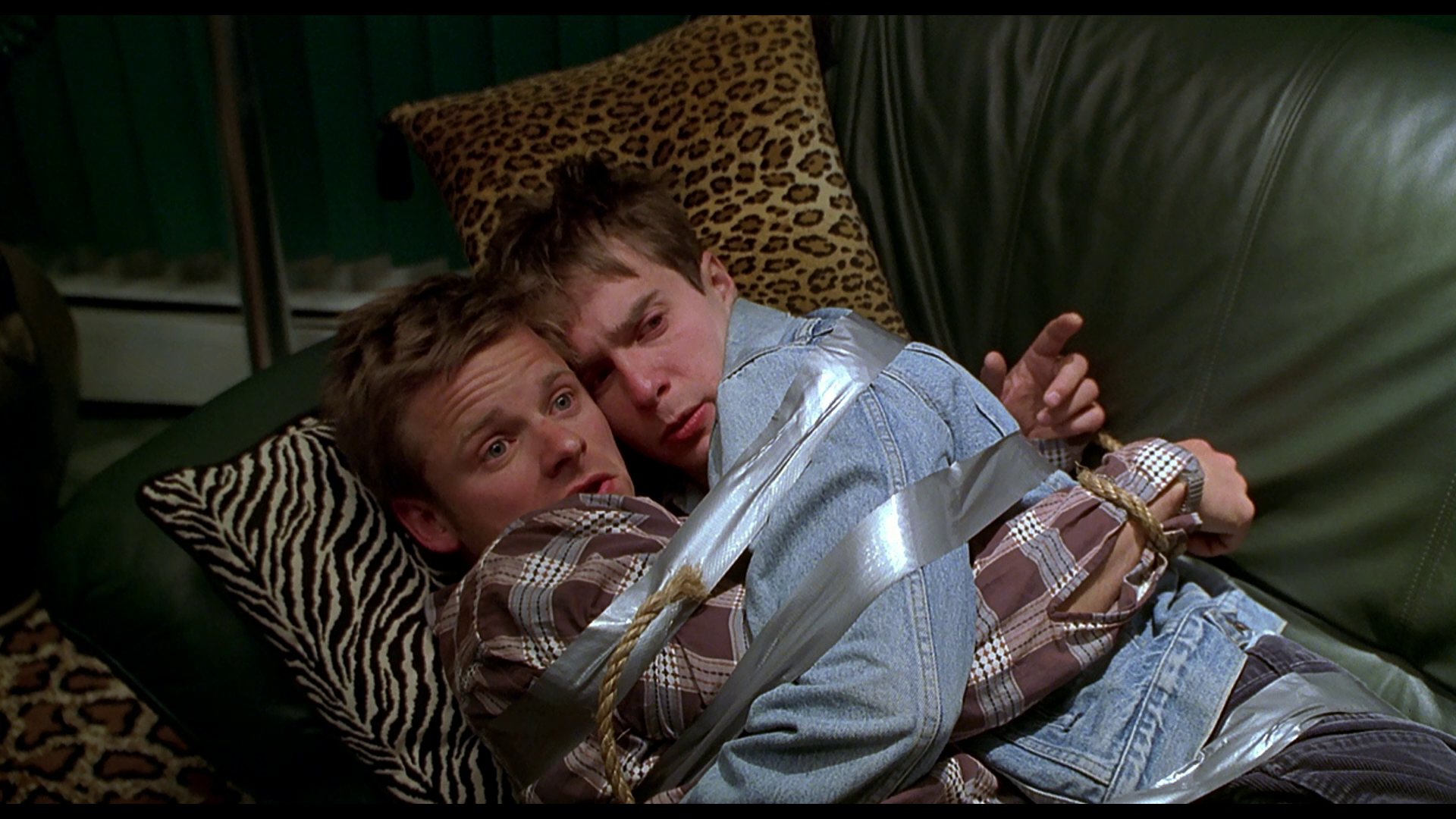 Smothered by DNR, Mill Creek issues a waxy, smooth HD presentation for Safe Men, probably sourced from a master left on the shelf for a decade or two. The little grain that’s left isn’t handled by the encode at all, further leaving behind digital remnants. Edge enhancement isn’t helping things either. Halos add to the awfulness while further reducing detail (what little detail there is to notice).

Bright color is a plus, although it’s oversaturated. The red uniforms worn by Zahn and Rockwell in the intro bleed out, and it won’t be the last time that happens. Safe Men looks made for the CRT era of the early ’00s, not 2022.

Black crush keeps the issues coming, as if Safe Men needed more. A little clipping in the contrast saps additional texture from the frame.

The 5.1 track spreads ambiance around the soundstage. In a bar, a jukebox pops music from the right side, and primarily the rear. Exteriors capture cars traveling through the mix, panning to the sides.

Heavier bass loosens up, flaring with a messy rumble. Like the video, the mixing sounds dated and analog in nature.

Debuting on Blu-ray, this is purely an A/V upgrade over the DVD (and barely an upgrade a that). No bonuses, and not even a menu. Safe Men boots right to the movie.

A quiet mistaken identity/crime caper comedy, Safe Men is held up by its cast and their cleverly written personalities.