There’s a military veteran, Will Sharp (Yahya Abdul-Mateen), who can’t pay for his wife’s cancer surgery. Yet to Ambulance, that’s not a condemnation of a broken health care system, rather a barb against how the country treats its soldiers on the homefront. Villains? A Mexican cartel, displaying caricature-esque racism as they kill cops with explosives and bouncing low-riders.

It’s pathetic, if disguised by director Michael Bay’s frantic pace and wild cinematography – the inventor of drone cameras didn’t consider the eventuality of a Michael Bay. Ambulance doesn’t shy from total chaos, making a case for why police departments need their budgets (primarily because they crash so many cars apparently), and something needs to cover the financial shortfall. Multiple helicopters and SWAT teams careen through city streets after two step brothers robbed a bank.

Will and Danny (Jake Gyllenhaal) make off with $32 million in cash. Given the damage to the streets, the helicopters, the lives, and pedestrian vehicles, and the LAPD cars, this entire incident likely turned a net loss for the city. That’s not Ambulance’s consideration though. What means something to this bonkers action flick is projecting an escapist ideal for the “blue lives matter” crowd.

Over two hours, Ambulance weaves thematic threads about brotherhood, both from the police viewpoint and the bank thieves. This comes through during the brief respites between the crashing and gunplay, the pacing otherwise ceaseless in its aggression. Ambulance begins blending together, entertaining in the same way Bay’s other action spectacles are. Sparks and fireballs intercut frantic, funny one-liners. It’s tiring after a while, and shot-to-shot so similar, all of Ambulance begins to bleed over while wrapping itself in familiar Hollywood trappings.

From the director who headed up Bad Boys, it’s hardly surprising, just relentlessly forgettable because there’s no time to absorb the information presented before the next bit of information. It’s sickly satisfying to watch the destruction and stunts, primal really, except Ambulance demands empathy for these faceless drivers. 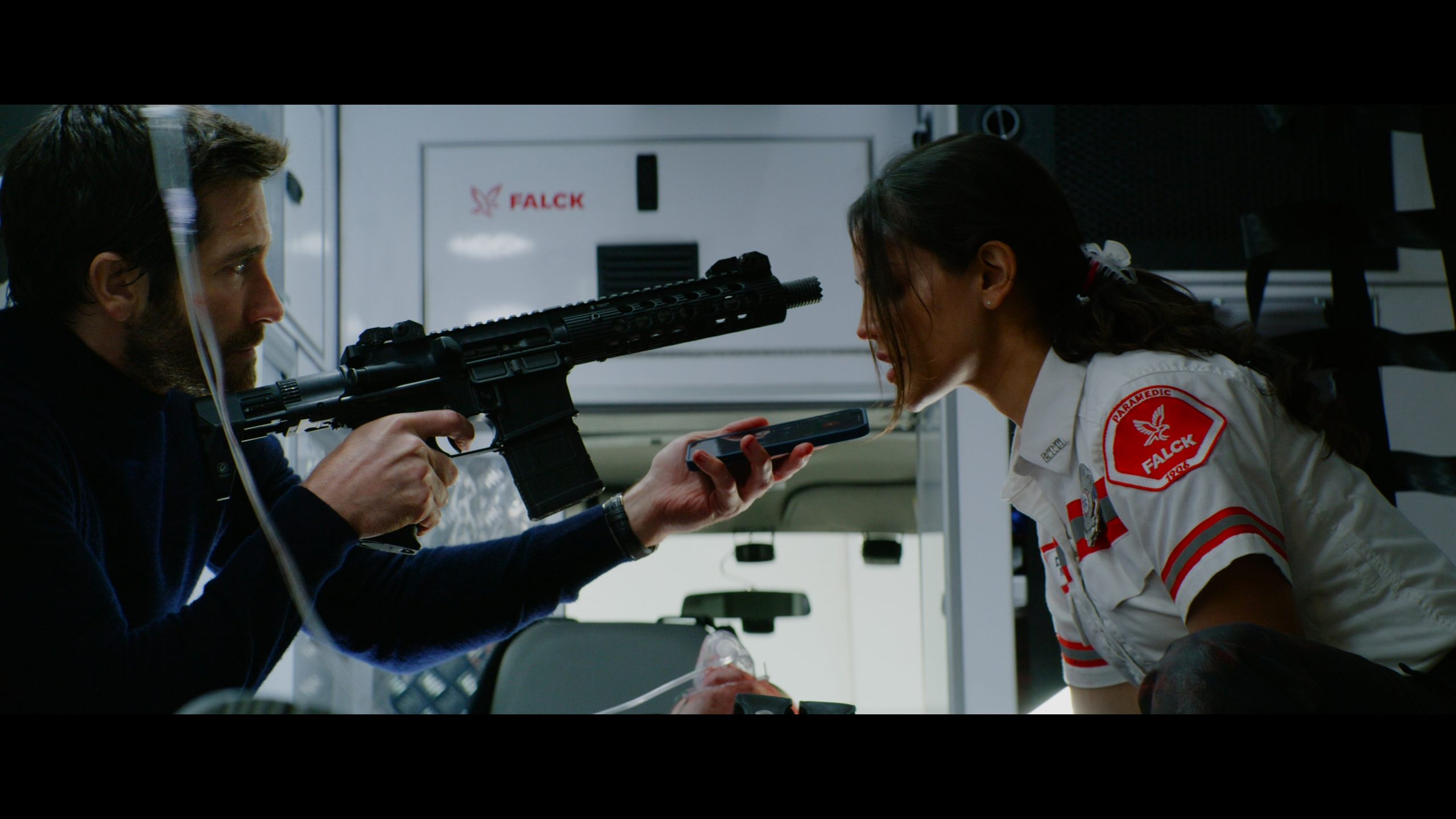 In the Michael Bay tradition, Ambluance is a visually intense movie, slamming hard on the Dolby Vision via the blinding contrast and heavy black levels. Dimensionality stays at a constant, completely three-dimensional. This never changes or lets up. In terms of pure brightness, Ambulance is among the best in the market.

Finished at 4K, texture doesn’t cease either. Facial definition pours out from the frame, and the numerous wide angles/aerials of the city look glamorous thanks to the sharpness. The slightest noise in this digital source doesn’t cause any problems or degradation; usually it’s confined to the background anyway.

Crazy color brings the primaries to a near bleed. Flesh tones oddly stay fairly natural, if slightly warmed. The rest though, they look sensational. The reds of the ambulance, neon sports cars, building paints, and other hues push limits but in the best way. It’s hyper-aggressive, nigh surreal imagery, but for home theaters, absolute demo material.

Punishing low-end creates either a consistent heartbeat in the score or from the action itself. Vehicle engines roar as loudly as Transformers. Gunshots flood the room, pushing maximum amounts of air. The tightness, the rumble, and shaking – all reference grade. Ridiculous range, like the video, is pure Michael Bay.

Generous motion through the soundstage pans cars, helicopters, and even general ambiance through the city. Bullets whip past, ridiculously accurate. Height channels never waste an opportunity, utilized at every opportunity to press gunfire or debris as needed. It’s masterful.

The UHD holds six featurettes, generally bland with an EPK style looking at the production, and one paying tribute to first responders, totaling 30-minutes all together.