Beamed Up (and Beamed Down)

Fire in the Sky never doubts Travis Walton’s story, that he was abducted by aliens over five days before being returned. Anyone questioning these events is presented as a villain, overly aggressive, and smug. To this movie, everything is true.

If Walton’s recounting is authentic, then he’s unlucky – a blue collar worker in Arizona, under-educated, and at the time of his abduction, in need of money for his various business ideas. In Hollywood, the chainsaw-using, pick-up truck driving logger is either comedic foil or enemy. Here, Walton becomes an empathetic protagonist.

The script takes liberties; all adapted stories do. For Fire in the Sky, that’s unfortunate. Producers felt the kidnapping wasn’t fantastic enough for the screen, as if being beamed aboard a UFO is somehow dull. Being realistic in their visuals, movies have the ability to penetrate the mass public more than a book, news story, or TV interview. Trying to amplify the already unreal dims Fire in the Sky’s credibility.

Robert Patrick takes the lead against stock antagonists, the government authorities from out of state who refuse to believe, even after administering a polygraph test. The fight becomes the poor working men against an egotistical detective, utterly derivative and pedestrian.

Walton is the key. As he goes missing for days, Fire in the Sky lingers around Patrick who slowly loses his patience and already strained family defending Walton. It’s rarely captivating material. By the third act, as Walton’s memories return, Fire in the Sky begins a special effects flurry, including animatronic aliens, spaceship interiors, and freakish experimentation.

Therein lies the challenge, whether audiences buy Walton’s account or not. Fire in the Sky never gives that choice and in engaging with the surreal visuals so definitively, locks in that decision for the viewer. There’s no mystery or nuance, no deep, insightful perspectives, and no doubt. Typically branded as society’s kooks, those who claim abduction and probing rarely have such an opportunity to have their side told on screen. Walton is lucky, even if the blatant one-sided viewpoint lacks reliability. 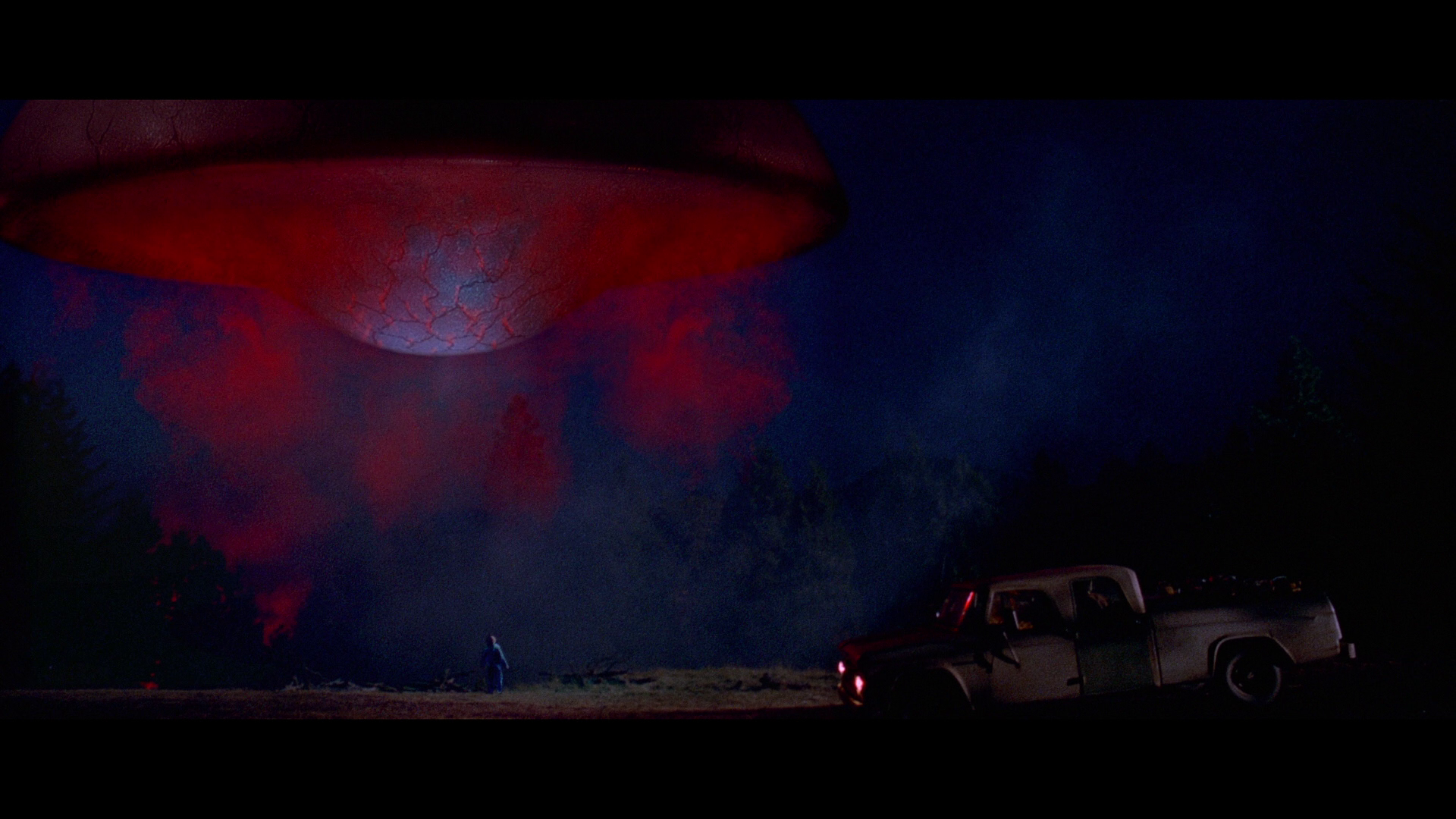 Shout/Scream Factory’s packaging doesn’t include a note about the master, but the results deliver. This is clearly a fresh scan, and close to if not from the negative. Spectacular sharpness and detail in droves make Fire in the Sky look new. It’s a spotless print, naturally preserved with the grain intact and well resolved. A few exceptions in smokier photography aside, this is transparent to the source.

Splendid color reproduction pumps up primaries to dazzling peaks, if never so far as to render them unnatural. A slight warmth in flesh tones looks appealing.

Intense black levels do leave behind crush. That’s on the source material though, not this disc. Characters enjoy retreating into darker corners. No surprise then the depth is helped by the rich, bold contrast (begging for an HDR presentation in the future). Sunlight flows across the frame, and lights, whether from UFOs or diner neons, shine gorgeously.

Fire in the Sky begins its aural life with a wild truck careening around the frame, rushing to the sides and panning through the rears. Helicopters fly by flawlessly. The full width of this 5.1 track is substantial, and it sounds every bit the early ’90s, when the tech was new, showing off the ability to surround an audience. This mix, assuming it’s new, preserves that aggressive spacing.

Bass doesn’t come through quite as clean. Muddy low-end pushes through the subwoofer loosely, rumbling if lacking force. Trees fall and create a minor bump as they land.

Fire in the Sky

Capably presenting the doubt, the mystery, and the tension of the unexplainable, Fire in the Sky is an interesting one-sided take on UFO mythos.