A decade after playing consistently loud, brash, and wholly enjoyable characters, the early ‘90s brought forth a different Eddie Murphy. With potent box office draw and star power, Murphy landed in Boomerang, using his position for a grounded look at black success.

The effort isn’t wasted. Given the chance, Boomerang peers into the upper echelons of a black-owned, high-end cosmetics firm. Through this, subtle racism plays out inside a men’s shop and in a cafeteria, providing that (then) too rare peek into a divided, racially judgmental culture. Boomerang’s stylish vibes offset the influx of gangland cinema that likewise served a purpose – to explore inner city realities; Boomerang created the balance.

It’s a fine, sexy, romantic film, bringing attractive people to attractive locations to sell the wealth. Murphy’s womanizing Marcus treats women as usable objects until his ploy backfires, Boomerang is genuine in progressing gender norms on screen as much as race. Whereas women, through an abysmal cliché, sleep their way to the top, in Boomerang, it’s Marcus. To him, success means sex appeal; the more he earns, the more women he can bed.

Boomerang’s twist then is the fault in his plan, that a woman could be as successful if not more so than him. Marcus doesn’t get a promotion, he loses control, and can’t sleep with the woman who took his spot (Robin Givens). He feels defeated, demeaned, but also challenged. The script smoothly fluctuates between moments of masculine conquest and earnest relationships, all as Murphy plays the part reserved and authentic.

As a comedy though, Boomerang lacks the typical Murphy charm. The best bits go to side characters, including Martin Lawrence or a scene-stealer from John Witherspoon in a scene that predicted Nutty Professor’s awkward family dinner a few years later. Not that Murphy isn’t a talented actor – he’s sensational – rather this script keeps him so subdued as to lose what made him a screen icon. Expectations kill sometimes. Boomerang is one of those, even as the drama ebbs and flows with the genre’s best. Halle Berry and Givens are capable in their dueling personalities, while also making it clear who Marcus will choose to complete his arc. There’s always a single solution in these movies. 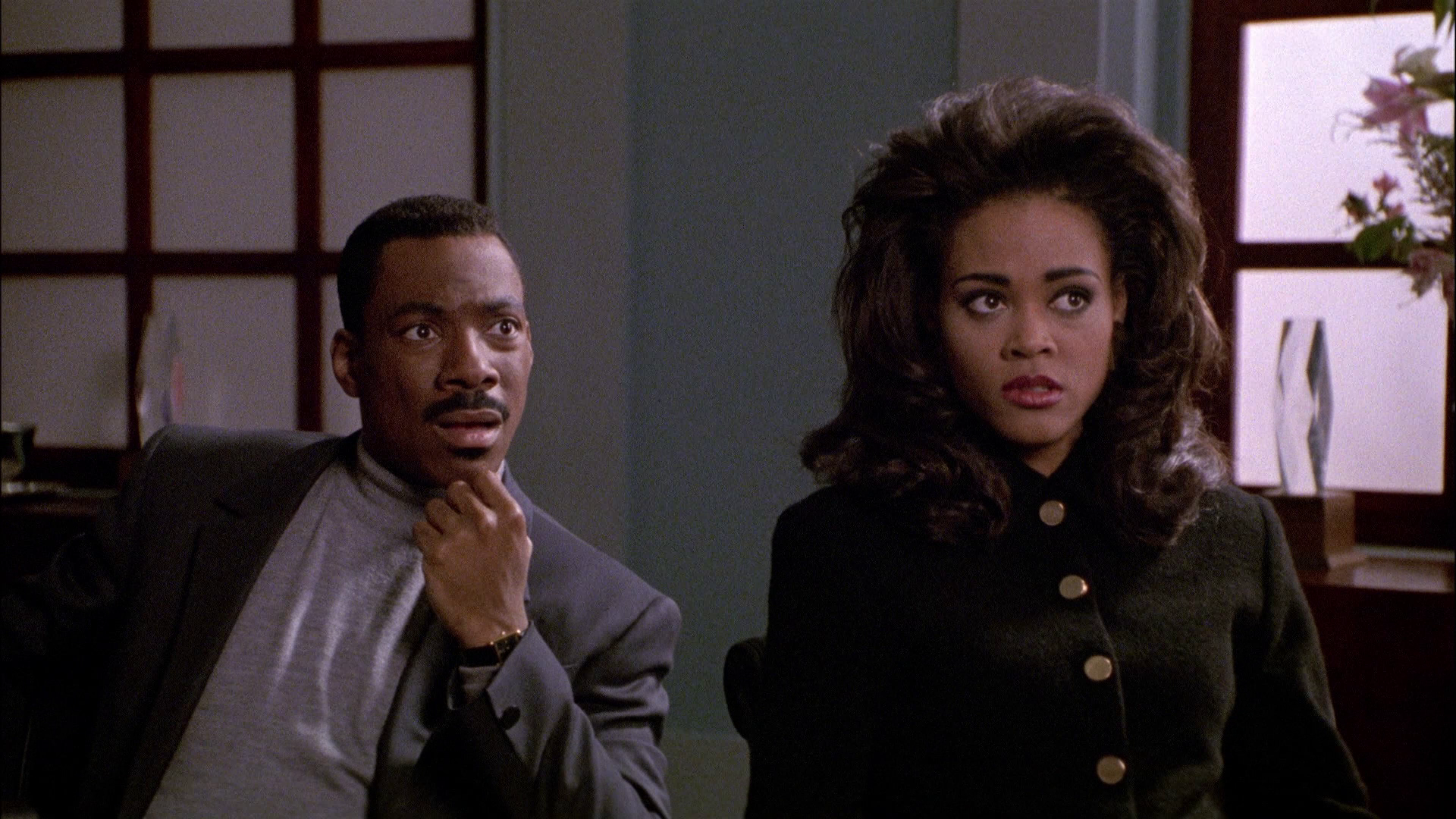 Boomerang debuts on Blu-ray, and there’s one party that didn’t care: Paramount. The print used shows dust as if left not in a can, but laid out in full on a shelf without so much as someone blowing on it. Worse though is the dated master, not intolerable, but bland in the extreme. Poor grain replication swarms like gnats rather than sitting naturally over the image. Encoding isn’t great either, on the noisier side. The screen is usually more artifact than organic.

There is detail, especially in close. Facial texture that can survive the the poorly handled grain does stand out, if inconsistently.

A marginal pop from the soundtrack utilizes the subwoofer, giving Boomerang low-end energy. Otherwise, the 5.1 mix stays tight, utilizing little of the soundstage beyond the center. Music spreads out, catching the rears slightly. A helicopter used in a promotional stunt pans front to back, a rarity.