Director Makato Shinkai was still finding his artistic voice as a young filmmaker when he made The Place Promised in Our Early Days. The feature debut from the now legendary anime director behind such classics as Your Name and Weathering With You showed promises of a master storyteller learning his craft and honing his animation chops.

Flashes of innovative visuals with a deep appreciation for intimate character building are held back by the messy narrative. Shinkai appears uninterested in exploring the film’s intriguing premise that could have used more dedicated exploration.

The emotionally grounded story focuses on the lives of three adolescent friends nearing adulthood. An alternate postwar reality rages on in a divided Japan torn into two countries. It’s a serious, haunting drama despite the science fiction undertones and occasional slice-of-life trappings. A tale of love and loss with a decidedly anime twist.

…The Place Promised in Our Early Days takes a mature, sophisticated perspective on young love and childhood dreams

A mysterious Tower across the border of a divided Japan looms over the landscape, which possibly connects dreams with reality. Hiroka and Takuya are two hopeful teenagers who dream of building a plane together, flying into the heart of the Tower’s unknown power.

The hard-working boys promise their friend Sayuri can visit the Tower once the plane has been built. Sayuri vanishes and their dreams are put on hold. The realities of adult living and a possible military attack on the Tower become the overriding concern for our protagonists.

The Place Promised in Our Early Days takes a mature, sophisticated perspective on young love and childhood dreams. The movie develops a haunting, almost wistful tone which is its biggest strength despite sluggish pacing. The largest issue is a haphazard screenplay which often feels more ambitious than its ninety minutes allows. Plot refinements and filling in a few early holes could have made Shinkai’s debut a true classic of the genre.

When Shinkai delves into the movie’s central MacGuffin, a huge monolithic tower which can upset the balance of power, he leaves the audience begging for better developed lore. One gets the impression Shinkai developed the premise originally for a longer series and was forced to cut significant background details for time.

Makoto Shinkai would go on to bigger and better things after The Place Promised in Our Early Days but it’s well worth a visit for fans. Hints of his potential are all over the place, including a jaw-dropping opening act which still resonates. Themes seen repeatedly in his later work like parallel realities and quantum weirdness are here in a raw, more unrefined form. 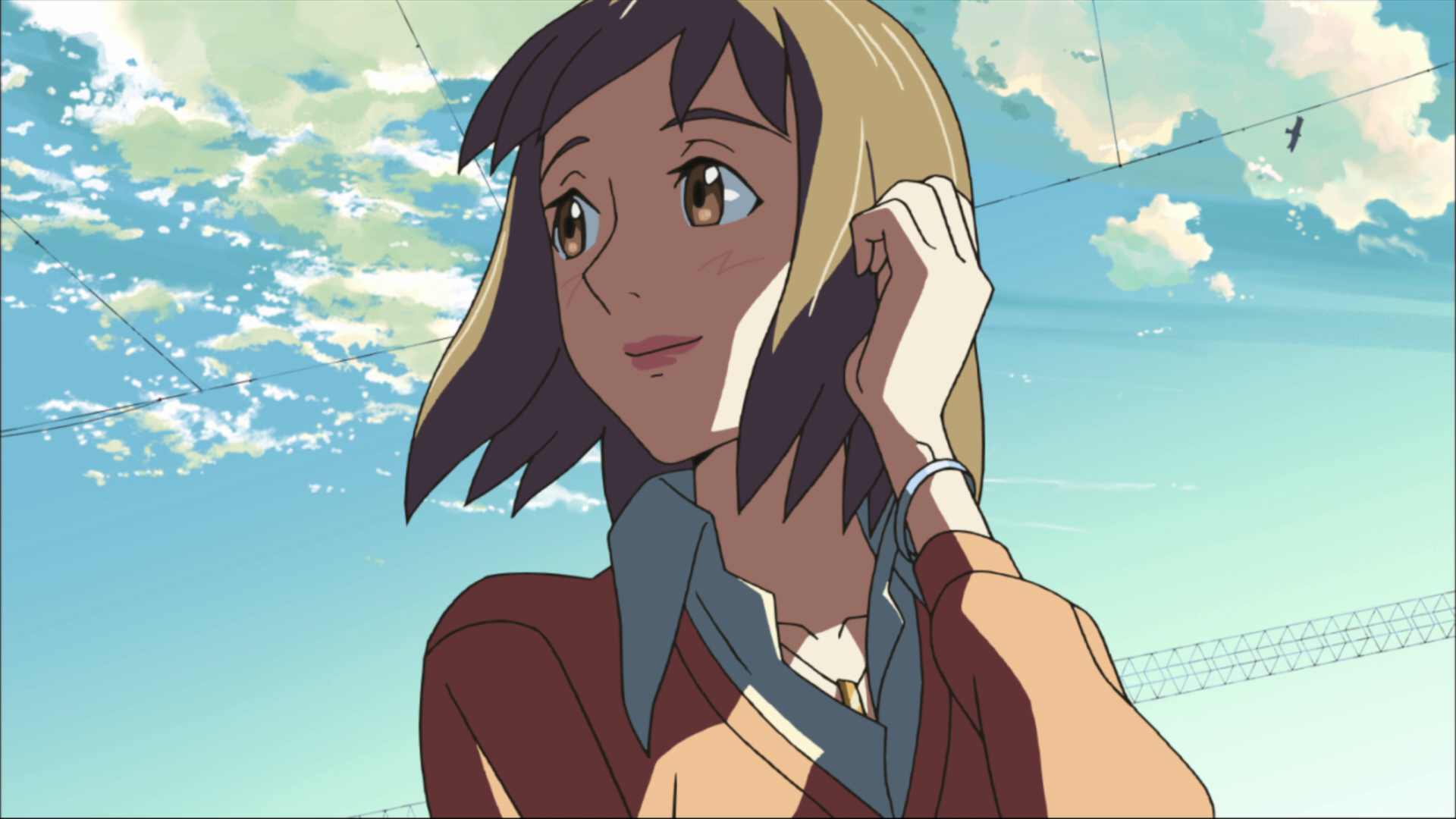 Key animation supervisor Ushio Tazawa and director Makoto Shinkai produced a fairly attractive, rich-looking anime feature given the constraints of their budget in 2004. Dramatic lighting and gorgeously drawn backgrounds highlight what is often a realistic palette grounded in less than saturated colors. Shinkai takes full advantage of the animated medium for his visual brand of storytelling.

The strong 1.78:1 presentation is free of visible banding, encoded in transparent AVC on a BD-50. Character designs fall rather in line with middle-of-the-road anime productions, though a few years ahead of its time.

GKIDS offers up a fine transfer of the animation without chroma errors or filtering. There’s accurate color reproduction and excellent black levels adjusting for the known IRE levels of Japan. The Place Promised in Our Early Days features strong visuals and interesting compositions. It’s not quite eye candy like more recent films from Shinkai but serves up decent animation in flawless 1080p video.

The film received a Japanese Blu-ray release back in the late 2000s from a different transfer. It’s hard believing the film could look better than this superlative job by GKIDS, who have repeatedly shown care and diligence handling anime films from Japan.

The original Japanese soundtrack and original English dub are heard in satisfying 5.1 DTS-HD MA audio. They are well-recorded soundtracks with mildly discrete elements. Music is nicely spread out across the entire surround bed while everything else is pushed forward.

Carried over from the first ADV DVD released in America, the English dub was directed by Steven Foster at ADV Studios with a cast that includes Chris Patton as Hiroki Fujisawa, Jessica Boone as Sayuri Sawatari, and Kalob Martinez as Takuya Shirakawa. The dub is dated by today’s better anime standards. I’d recommend the Japanese audio unless you have a serious aversion to subtitles.

GKIDS brings The Place Promised in Our Early Days to Blu-ray for the first time in North America. The single-disc release arrives with a glossy slipcover which matches up with other Makoto Shinkai Blu-rays put out by GKIDS. The disc is coded for Region A.

Special features include older archival interviews made for the original Japanese DVD release and were previously seen on earlier Region B Blu-rays. They are in Japanese with English subtitles provided.

Those looking for Shinkai’s short Voices of a Distant Star, which gave him the credibility and necessary respect to make The Place Promised in Our Early Days, will find it placed on the Blu-ray from GKIDS for 5 Centimeters Per Second.

Interview with Director Makoto Shinkai (12:35 in SD) – A strong interview explaining Shinkai’s working process and behind-the-scenes development. Storyboards are highlighted in how he shaped the movie’s narrative and visuals.

Trailer Collection (07:02 in HD) – Three trailers of various lengths for The Place Promised in Our Early Days.

Full disclosure: This Blu-ray was provided by the label for review. This has not affected DoBlu’s editorial process. For information on how all review material is handled, please visit our about us page for more details.

The Place Promised in Our Early Days

A promising, if unsure, debut feature from visionary anime director Makoto Shinkai which teases his future greatness as the next big thing in animation.