Marnie is draped in luxury. Cruises, mansions, horses, lavish estates, and rich publishing executives fill this story of a tortured woman and the domineering man who falls for her.

Star Tippi Hedren and Alfred Hitchcock did not get along off-screen. Some of that comes through ON screen too, as Hedren plays the title character seeking to keep her social status through compulsive robberies, and Sean Connery as a man forcing her into a relationship against her will.

What Marnie projects is a male fantasy

It’s dated, of course. Marnie buries her past, and rather than seek help, Connery keeps the facade alive in public. In private, he cruelly forces himself upon her, even turns abusive. Marnie stands for a period that believed a person can break from their mental crisis through unforgiving routine. Not empathy, just aggression, and showing the person how good they have it. The wealthiness is a measure of pity – Marnie steals, but never appreciates what she has. A grisly past and distant mother act like handcuffs on her life.

At times, this story suits Hitchcock’s worst urges toward women. Connery serves as the story’s hero, but takes that status through rape, because in Marnie, sex is a cure all. All women need for stability is to be controlled, owned, and trapped. The middle act takes place on a honeymoon voyage at sea; Marnie can’t escape. She has nowhere to go. Connery can then command his new wife.

There is complexity to Marnie insofar as Connery’s intentions are to genuinely help this woman – eventually. He’s infatuated, but also sees a challenge. What Marnie projects is a male fantasy, that sexual tension and release serve as a cure all, even when against the woman’s will. Knowing the real world drama behind the production, it’s difficult not to feel Hedren’s truthful terror as she looks toward the camera.

As a mystery thriller, Marnie represents the end of Hitchcock’s reign. The ‘70s drew nearer after this, and the director’s work began slipping away from the tautly compact and thematically sexual. Marnie succeeds only because Hedren and Connery work as a pair, the grossly masculine angle aside. It’s authentically uncomfortable, often viewed from Hedren’s perspective, her terror evident whether she’s slinking into a corner or looking directly at her new husband. Say what needs said about the “cure,” but the actual disease is startlingly real. 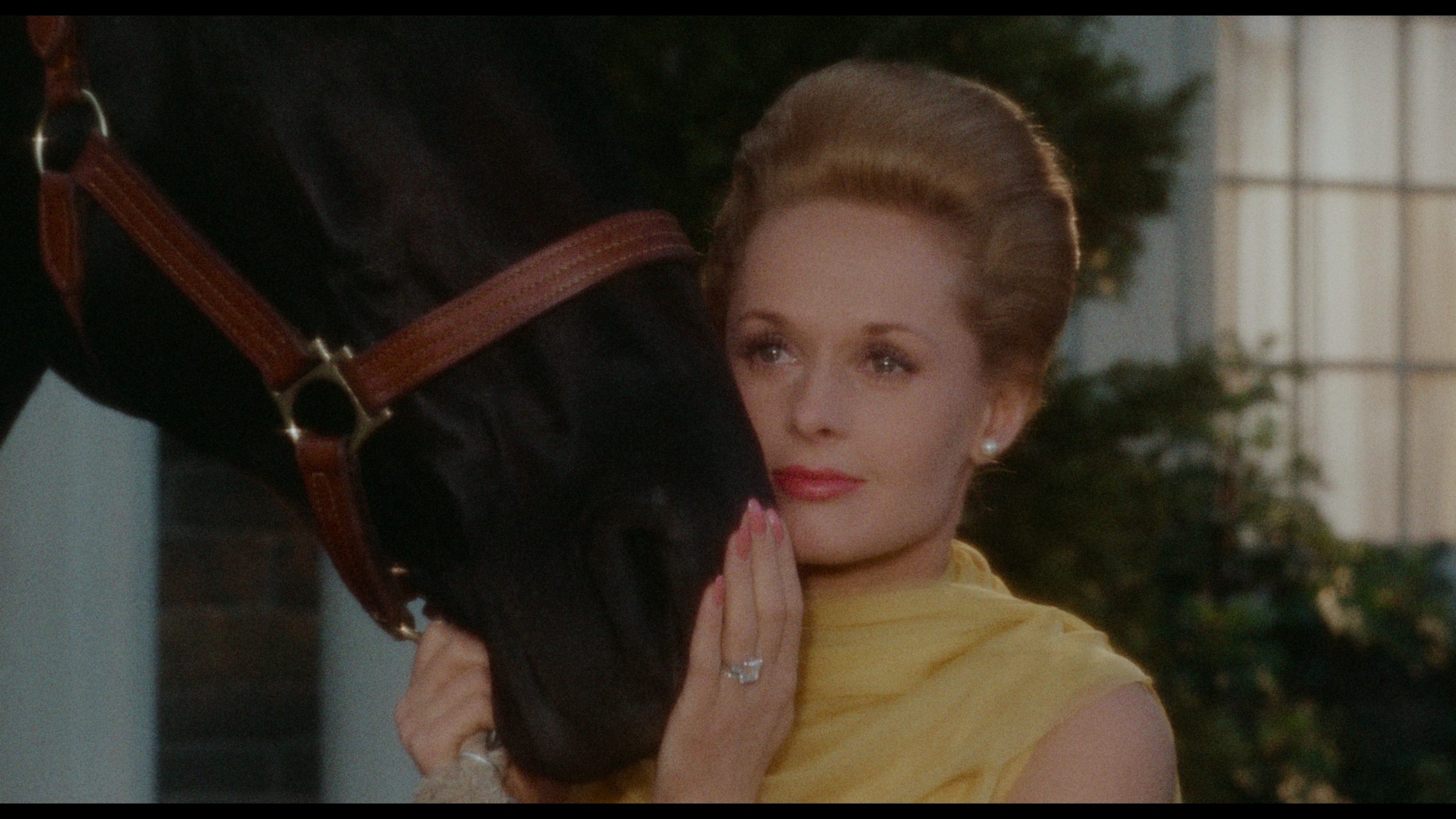 Diffused cinematography limits Marnie’s sharpness, but no question this disc preserves the material flawlessly. Universal’s encode handles the challenge of the slight haze evident throughout. The print itself shows zero damage, and other than an odd checkerboard pattern in the sky (the very first shot, then again later), this is stellar work from Universal.

What can escape, in fidelity terms, finds purpose in this 4K scan. Wide shots in the city show superb detail. Studio sets reveal the ’60s era interior design perfectly. In close, the steamy aesthetic reduces texture, but it’s not without moments.

Marnie’s fear of red means the primaries rise to suit flashing lights indicating her terror. The palette favors those scenes, keeping the other hues saturated if not vivid. Marnie prefers natural, dense flesh tones and the like. Key elements, such as the yellow bag, look prominent. Given the chance at HDR, it’s generally mundane. Contrast can produce highlights worth the tech, if infrequently. Solid black levels add depth, if all together limited in gains over the Blu-ray.

DTS-HD mono serves Marnie well. Clean, clear dialog pairs nicely to the smooth violins in the score that hit high pitches sans distortion. It’s aged, if barely. Bass slips through on occasion from the music. This is a prime example of vintage audio restoration.

An hour long look back on Marnie details the production before the requisite promo materials and a trailer.