Star Fred MacMurray became the patriarch of the artificially happy TV sitcom My Three Sons some 15 years after his stint as crass insurance man Walter Neff. In 1944, as people outwardly projected their comfort through flawless domesticity, inside their walls, dissent grew. That’s what Double Indemnity latched onto even as the brilliantly entertaining, romanticized dialog finds methods to stay suggestive rather than direct.

There’s an insatiable lust at this story’s heart; MacMurray and Barbara Stanwyck need one another, but only for off-screen sex. On-screen, their interludes happen in a grocery store, shying away from leering eyes, and their release isn’t physical, rather the stimulation shared as they plot a murder.

Double Indemnity presents a stale world. MacMurray’s Neff rejects a desk job; that’s not his way as a bachelor, and likely, he woos more women when on the clock than just Phyllis (Stanwyck). Double Indemnity tries to make Phyllis sympathetic initially, her husband a cheap, overworked, abusive brute. Their home seems blank, even sparse. Yet, Neff and Phyllis become so crass, careless, and indifferent to their crime – and each other – they overtake an obvious screen villain’s part.

Capably driving the tension and invested in these characters, audiences are meant to root for Neff’s plot. There’s fear as the pair are nearly caught, and a release when it seems their plan will work. Maybe that’s instinctual or a projection, now as much as then, a fantasy escape driven by people daring to do wrong – the worst kind of wrong – to satisfy themselves.

Middle class America hasn’t changed much. If anything, it’s a lesser portion of the populace than it was. Double Indemnity was originally written as a depression era novel, making the insurance scam a necessity to survive. That’s lost in the film version (Phyllis just wants to buy new hats), yet feels reinvigorated in a time when the wag gap reached a new severity. The relevance from the source material has returned. 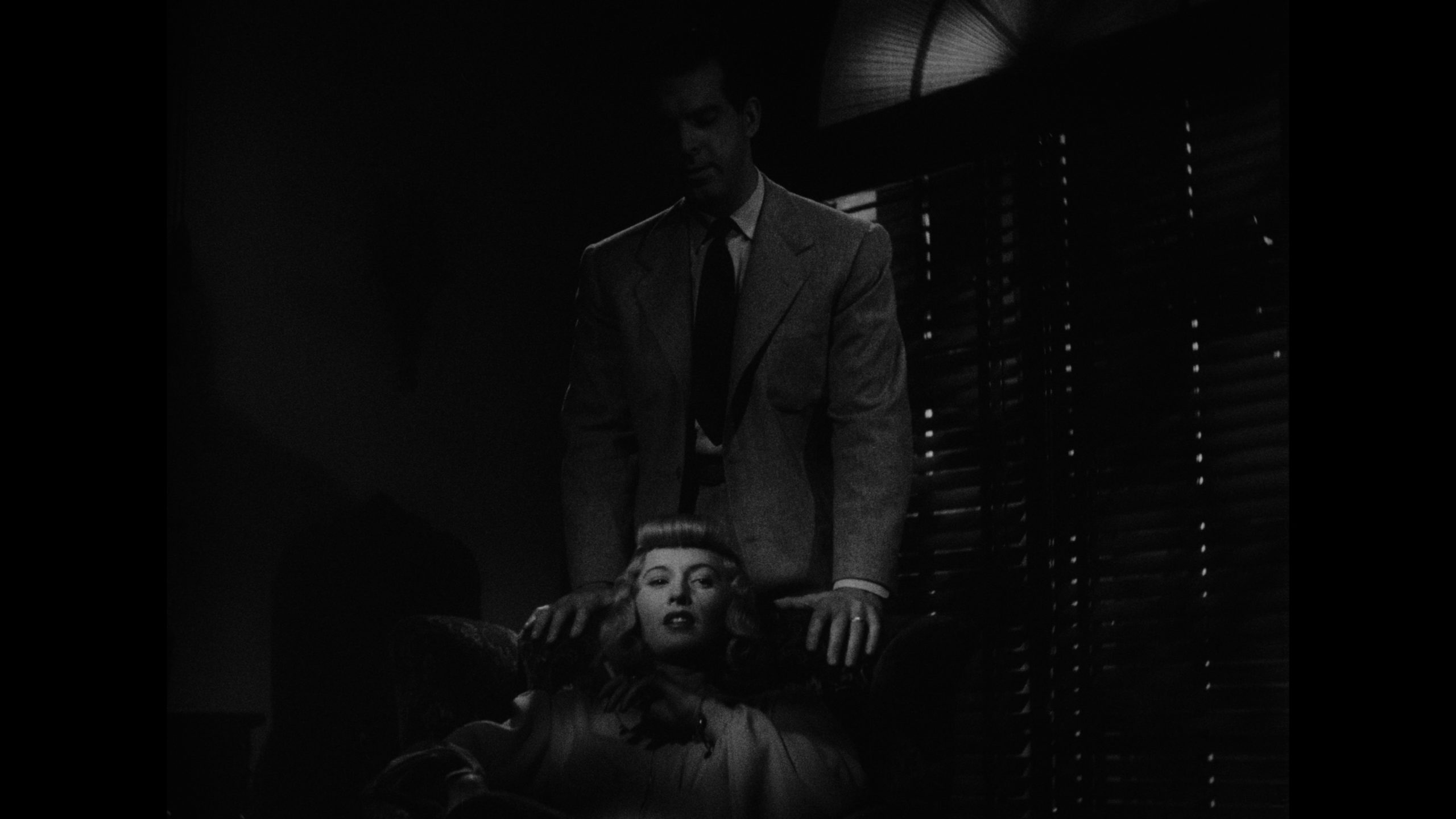 Issuing a beautiful 4K master, Criterion’s disc excels at presenting this early ’40s imagery. It’s a nearly spotless print. A slight flicker aside (and inconsistent flicker at that), Double Indemnity’s visual side is faultless. Preserved grain keeps the encode working, but it’s perfectly resolved, even in the haze of cigar smoke.

Source materials present satisfying sharpness, the cinematography hazier without the precise sharpness of other catalog titles. All that means is Double Indemnity is preserved intact, the texture maintained where visible down to individual hairs or suit stitching.

A Dolby Vision glaze keeps the gray scale full. Excellent mid tone grays bounce between the deep, shadowed black levels and bright contrast. The lighting schemes introduce clipping to pump up intensity, yet only at the absolute peaks. This makes the slight hazy bloom pronounce naturally, allowing Double Indemnity look even better now than it did in ’44.

Unobstructed PCM sounds its age in terms of hollow dialog and stretched treble from the score. Yet, there’s stellar clarity all around, vintage and well preserved. All of the audio is stable, clear, and impressive. Static? Popping? Drop outs? None of the latter or former.

On the UHD, Criterion includes a 2006 commentary from critic Richard Schickel. The rest of these bonuses sit on the Blu-ray. Scholar Noah Isenberg is up first in a new interview that runs 17-minutes. Eddie Muller and Imogen Sara Smith pair for the next conversation, and their chat lasts just over 30-minutes. An older documentary lasts for 37-minutes. Criterion packs in radio plays and the usual round of trailers.