“The narrative follows too, written with a direct, crass political bent that believes few (if any) systems exist without corruption. While most Batman stories celebrate the wealth of the hero, The Batman finds the villainy in that as well, anchored to a contemporary eat the rich/Occupy Wall Street mindset that doesn’t ignore Wayne’s frustrating refusal to help Gotham aside from vigilantism.”

Read our full review of The Batman for more.

The Batman demands HDR in any form. Warner goes with Dolby Vision, and it’s essential to the mood, tone, and style. Grading favors lighter shadows, just off from pure black, although that density is achieved in places. What matters is how well detail stands out from the deepest parts in the frame, whether it’s Batman’s suit or a black jacket; there’s always definition achieved, because the brilliantly smooth transitions from one shade to the next allows everything to show. And, although light is kept reduced by design, reflections from Batman’s symbol poke through the bleak aesthetic.

Reserved color appreciates a solid amber or orange, restrictive yet bold and dense. This isn’t splashy or visual splendor in regards to the palette, but the mood is achieved in full. The few breakout moments include trips around downtown where neons and video screens excel in their brightness.

Overlaid with a digital grain filter, the 4K-finished imagery softens to emulate a diffused film stock. As such, fidelity stays on the lower end, although it’s no fault of Warner’s beefy encode (the video file reaches 90GB total). This isn’t to say The Batman lacks definition. There’s plentiful design touches to pick up on the Batsuit. Skin texture shows through where possible. It’s appealing in style, and the transfer to disc preserves it flawlessly. 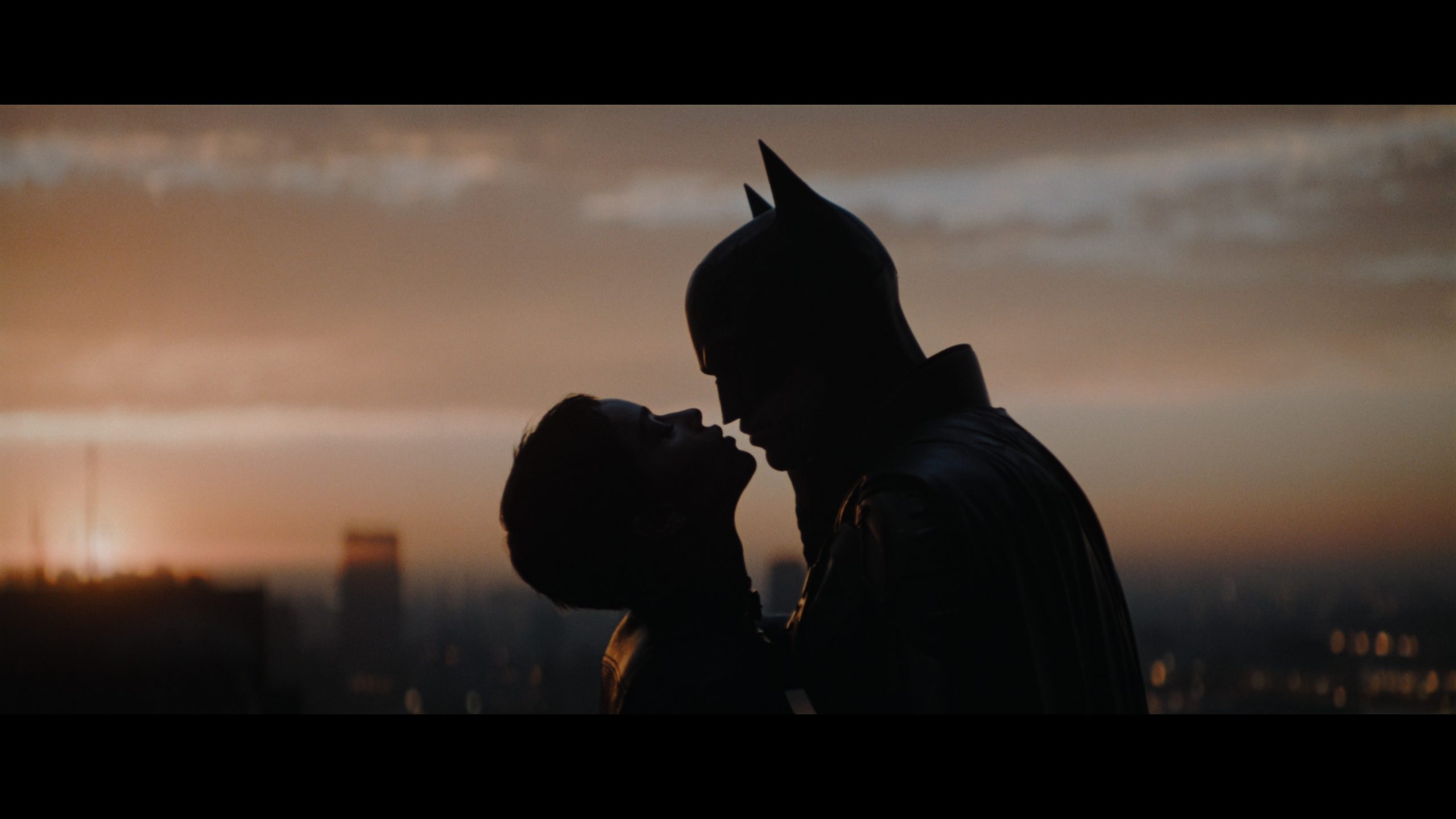 While the visual design appreciates subtlety, that’s not the case with this monster Dolby Atmos track. Gotham breathes through this entire movie, whether the score reaches around to hit every channel or steam hisses from sewers. Rain splashes overhead and voices travel where needed while subway trains rumble across their tracks. Whispers echo. As the action ensues, it’s home theater spectacle. Vehicle engines roar as they pass, transitions flawless. Batman’s cape rushes air through the rears as he turns quickly. The smallest sound is accounted for.

Incredible low-end response – the first instance inside a pulsing club – doesn’t hold anything back. Punches hit with force, yet the bolder action goes deeper still. Motors roar, rumbling the room, doubly so for the Batmobile. Flood waters crash into a stadium during the third act for a monumental jolt. More than just the range (which is reference) is the absolute power coming from this mix. The Batman ranks among the home audio elite.

These reside entirely on the special features Blu-ray inside the package. The major piece is Vengeance in the Making, a nearly hour-long making-of documentary, and best-in-class stuff. Nine short featurettes follow, some generic and made for marketing, but well produced. Two deleted scenes – including one with the Joker – also offer an optional commentary.

While successful in mood and style, The Batman’s stuffy, overwrought runtime doesn’t feel necessary or useful to this unique take on the character.