Santiago (Antonio Banderas) plays Uncharted’s heavy: a wealthy, egotistical treasure hunter. In part, he’s the simple cinematic villain whose entire personality is based in his money. Yet, he’s also representative of the long-standing culture debate around artifact pickers, where entire cultures are stolen from their homelands to find a place within first world museums. Santiago’s father sees this mistake, Santiago himself does not.

But if that’s what solidifies Santiago’s villainy, it’s a wonder why audiences are meant to cheer for Nathan Drake (Tom Holland) and Sully (Mark Wahlberg) who do much the same. They grave rob, break into churches, and destroy an ancient pirate ship. If theft determines Uncharted’s morality, then the heroes share equal fault with their competition.

Of course, the videogames on which Uncharted is based, go further – Drake shoots hundreds if not thousands of people over his five starring entries; Holland’s Drake doesn’t pull out guns until the closing act. In that sense, movie Drake exists on steadier ground.

Otherwise, this adaptation stays relatively accurate to the source, borrowing action set pieces from a few Uncharted interactive sequels, if remaining true to the fourth game mostly for its mystery. In doing so, and by excising the videogame’s filler, the focus comes in on Drake, Sully, and rival Chloe (Sophia Ali). Also in doing that, it’s difficult to avoid the thin, flat characterization, typically salvaged by comedic timing in the games. Holland and Wahlberg don’t click as well, much as they may try.

There is fun. It’s goofy, pulpy, and usually hollow escapism. Uncharted shows zero interest in exploring anything other than surface level history, holding onto Indiana Jones’ coattails, something novel in the videogame world, and not so much in Hollywood. Enthusiasm dwindles between periods of in-fighting among the key players, and over two hours, this is surprisingly thin on action, saving money for large scale thrills (and choosing truly awful budget-conscious green screen compositing elsewhere).

Uncharted wants a sequel. The ending and post-credits set that up, yet one of the final images is Drake and Sully elated over the pirate gold they hold in their possession. Funny how that works, and how quickly audience empathy is (or is supposed to be) flipped when someone shows charisma. Being rich isn’t the issue. Neither is how ill-gotten those funds are. It’s all in the presentation and personality. Uncharted has a little to spare. 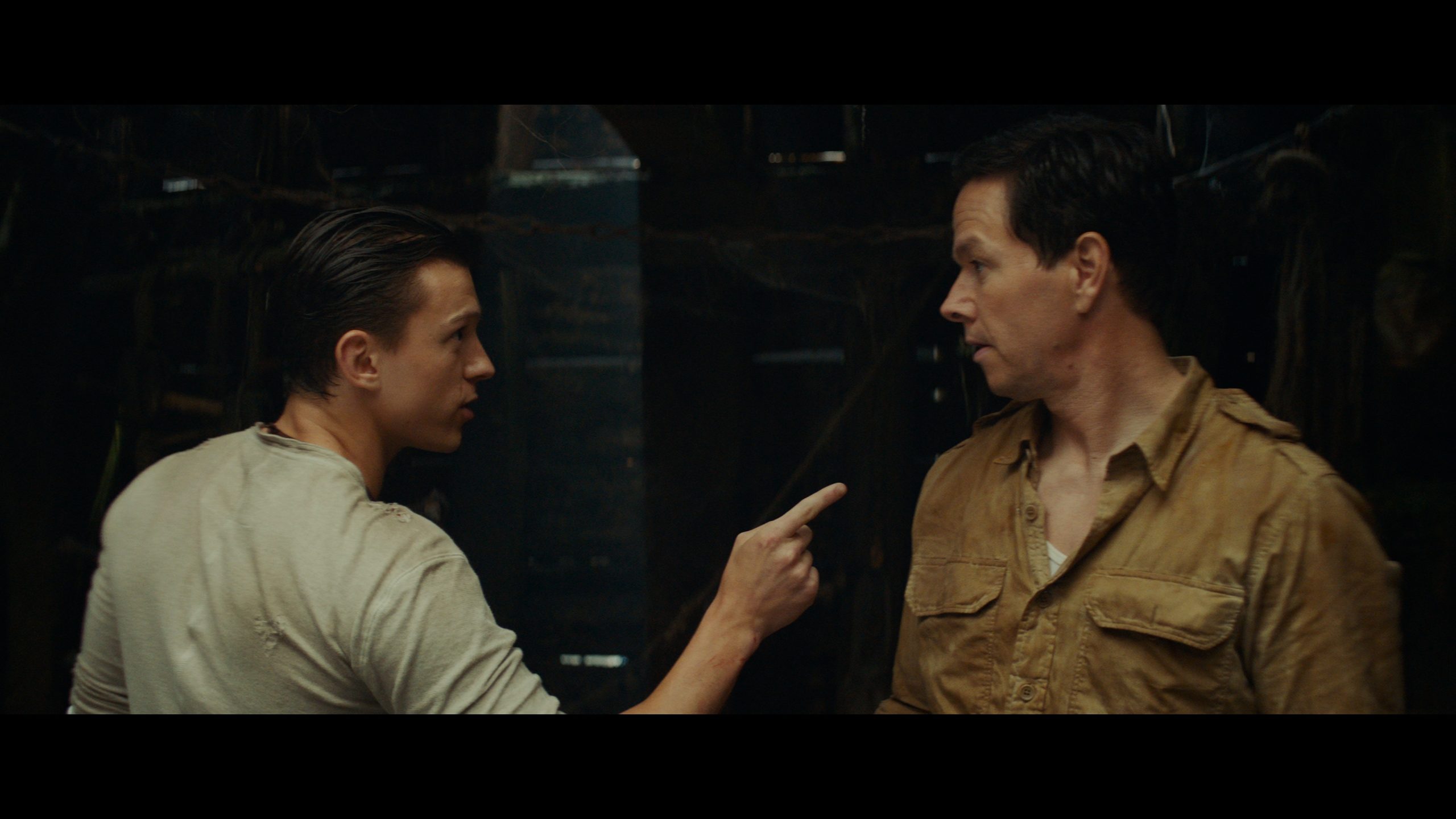 Noisy digital imagery is the source for this 2K material, playing out on the messier side and keeping the encode working overtime. That doesn’t help much as Uncharted usually fills with chroma errors. Stiff, solid, and bright color furthers the issue. Whether it’s walls or flesh tones, the digital-ness persists, and unusually heavy for a major studio production. A little ringing doesn’t help either.

Bringing the gloss for a high dollar production is the Dolby Vision job, pounding out the highlights and brightness. When light and dark clash, it’s visual spectacle, using the full width afforded to this format, even if black levels tens to fall on the lighter side by design. Note this doesn’t help hide the often sloppy composites, but that’s no fault from the disc.

Detail can thrive, but infrequently. The noise buries quite a bit, yet even when in exterior light and clarity stays high, fidelity doesn’t hit a particularly notable peak. Facial texture stays moderate with average medium and/or wide shots (aside from brief city aerials). Some of that falls on the CG extensions keeping resolution restrained.

When given the chance, Uncharted’s booming low-end stretches deep, pouring out power and depth. Whether it’s a dance club or ancient machinery coming to life, the subwoofer extensions can swallow a room. Oddly though, it’s on the reserved side, choosing to hold off until the moment is right, and staying lean the rest of the way. Gunshots and punches bring limited weight in comparison, but pick up by a major late second act action scene.

Surrounds pick up alongside the action, fairly mundane otherwise even where offered ambient potential. Things like rushing water will fill the overheads, giving Uncharted a capable sonic space to play with. The finale involves dueling helicopters that see purpose in Atmos effects, if inconsistently. There’s enough accuracy, but it’s not the type of mix to keep on a shelf to demo short of the last (and lengthy) action sequence.

On the UHD, a commentary from director Ruben Fleischer stands alone. The included Blu-ray hosts the rest beginning with 10-minutes of deleted scenes. Six dull (and mostly sub-five minute) EPK featurettes, a music video, and trailers end this one.

Well translated from the source videogames, Uncharted is perfectly forgettable entertainment that if nothing else, exposes the material’s limitations for storytelling.