“Beyond the tight plotting and smart dialogue, the movie works because of the good girl/bad girl divide typified by the sweet Sarah and troublemaker Nancy. Both Robin Tunney and Fairuza Balk own those roles, turning them into multidimensional characters. They are the movie’s two primary leads and wonderful as dueling archetypes.”

Read our previous Blu-ray review of The Craft for more.

Shout/Scream Factory credit Sony for this master and it’s a genuinely gorgeous, sharp 4K source, preserving the grain, and avoiding any processing. The print itself looks fantastic, devoid of damage. Resolution looks outstanding, dazzling in precision and clarity, plus unquestionably a 4K scan. The Craft’s thicker-than-usual grain swarms the imagery, and generally (that’s a key word) appears well resolved.

However, the encoding is messy, even when the bitrate is high. Odd chroma artifacts appears often, sometimes with fast motion, other times not; there’s no consistency. A few times though, the compression falls completely apart. It’s not frequent – a few moments throughout – where the otherwise pristine material is hampered by chunky artifacting. Oddly, with one exception, these drops come during scene dissolves where the softened material invites further chunkiness. Thankfully, these moments remain brief.

Thankfully, the Dolby Vision pass is a great one. Intense brightness casts potent highlights, giving candles and sunlight kick. Cinematography drapes itself in deep shadows, those too performing admirably, the depth spectacular and breathing life into this mid-’90s production. Color saturation benefits too, bold and vivid, but never inaccurate. Spot-on flesh tones pair well to the environments, whether forest greenery or the city’s many sights (including neons). It all sizzles. 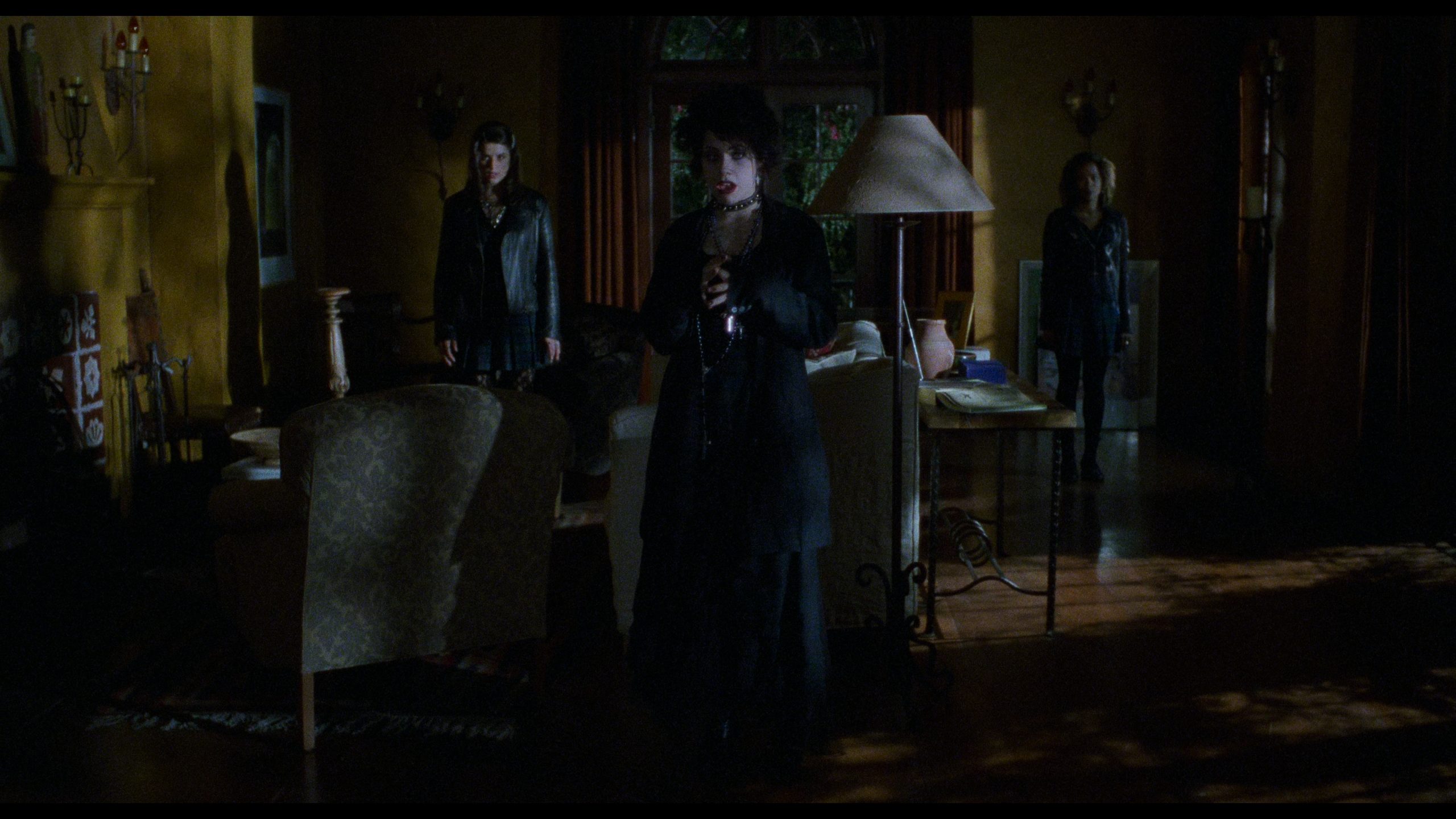 A decent enough 5.1 track captures ambient effects like wind and city noises well. Accurate imaging presents a wide soundstage, and even during minor dialog scenes, there’s sound traveling around the school’s halls or a storm splashing thunder through the stereos and rears.

Lightning bolts during spells will engage the subwoofer, a so-so rumble that’s noticeable but light. The beefiest moment comes from an explosion inside the witch’s shop. However, it’s on the muddier side, lacking tightness.

Everything is carried over from the Blu-ray – and everything resides only on the Blu-ray, other than the commentary.

Audio Commentary With Director Andrew Fleming – An older commentary made by the director for the special edition DVD. A fine discussion with behind-the-scenes anecdotes.

Interview With Director Andrew Fleming (15:12 in HD) – Fleming recalls his contributions as co-writer and casting his stars in this informative new interview.

Interview With Producer Douglas Wick (13:28 in HD) – A new interview by Shout Factory that discusses how the movie was initially pitched and Wick’s experiences getting the movie made when Hollywood executives were nervous the movie had no stars.

Interview With Co-writer Peter Filardi (10:44 in HD) – Part of the new interviews, Filardi had been working on a script about teenage satanists when he got the call for this horror movie.

“Conjuring The Craft” Featurette (24:35 in SD) – An older archival featurette that interviews the cast and director, going behind the scenes. Fairly typical making-of documentary stuff from the 2000s.

“The Making of The Craft” Featurette (05:59 in SD) – A fluffy EPK featurette from the movie’s early days on home video.

The Craft is a work of pure ’90s teen rebellion, concentrated in Goth culture, saved by the stellar cast.