John Patterson (Val Kilmer) brings one thing to Africa: His determination to work. That’s culturally instilled in him, no matter the circumstances. People matter not, only the bridge he’s assigned to build counts.

Ghost and the Darkness, on paper, is a nature attack movie. Its form comes from Jaws, including the professional hunter on the fringes of sanity, a drunken scene where three heroes discuss their lives, and the unusually ferocious killer animal, or in this case, animals plural. People die, the bridge continues construction.

What’s different is the setting, more so than just being on land, but the central politics involved. Jaws laughed at capitalist ignorance. To an extent, so too does Ghost and the Darkness, only bringing a historical slant. What’s driving this railroad bridge isn’t inherently profit – although that is part of it. Rather, the egotism stemming from British colonialism, believing this railway can bring an end to slavery, a problem created entirely by these same outside nations.

This story is true, mostly. Ghost and the Darkness pumps up the kill count to an asinine degree, bettering the truth three times over. Sensationalized or not, the facts centering on Britain’s occupation do not change, even with Tom Wilkinson overplaying his part as the leader in this project.

Man wins. Of course he does. This is a true studio film, and the actual lions that caused these deaths remain permanently on display in Chicago. The bridge is completed too, and an inappropriate, sweeping musical theme from Jerry Goldsmith celebrates victory. Yet the idea of winning because Patteron returns home is wholly absurd. If anything, he’s at fault. The victims created by his own personal, selfish drive rarely have names. To colonial Britain, and even now, an African tragedy means little to those living in first world comfort. It’s a movie with a white savior complex – from a problem he’s at fault for.

What Ghost in the Darkness lacks in general thrills and plot cohesion, it counters with a headstrong approach to hypocritical egos, unafraid to draw visual inequality while still producing mainstream action. It’s stern, at times forceful, while hiding historical racism between bloody animal strikes. 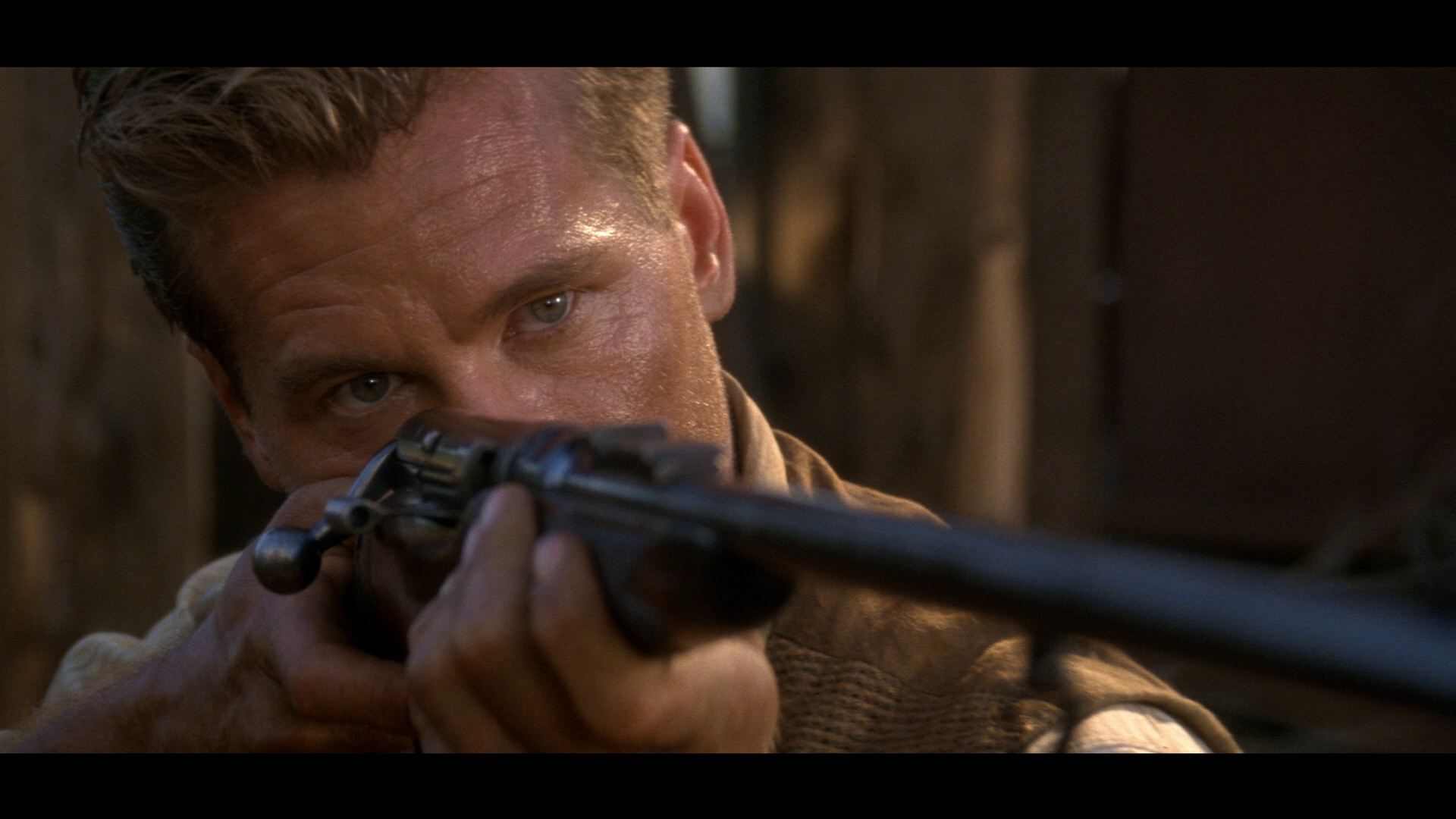 Debuting on Blu-ray, Ghost and the Darkness does not appear to use a recent scan. In fact, this looks outright analog in nature, from the buzzy grain to moderate (at best) resolution. On compression alone, this improves over the endlessly outdated DVD, even if that’s not saying much.

African locales meander in their definition, robbing the natural beauty. Sweaty faces produce appealing textural qualities. At the very least, grain remains intact and all sharpening is dialed down to zero. This does look like film, just a source not well mastered and quite fuzzy.

Passable color saturation enjoys the heated exteriors, filling them with warmth. Greens and blues escape, nicely dense in their purity. British flags flying in the background beam off the screen.

Bold in its width and scale, the 5.1 DTS-HD track (in addition to a stereo mix) isn’t shy about ambiance. Insects and birds call out in every speaker, sometimes to a point of over-aggressiveness. The ’90s were like that, and Ghost and the Darkness is a premium example. There’s life everywhere in this movie, from minor winds to brush being pushed aside as animals stalk their prey. The old hospital attack, with lions on the tin roof, is begging for Atmos, although this track does superlative work too.

Lion strikes generate notable thrust in the low-end. Growls, alongside the pounding drums in the music, create a tense environment that adores the subwoofer. Gunshots make their mark too, the rumble hearty with each bullet.

The Ghost and the Darkness

As much a nature attacks thriller as it is historical condemnation of British colonialism, Ghost and the Darkness is successful studio filmmaking.