Gene Kelly and Debbie Reynolds dance their way into your heart in the exhilarating Singin’ in the Rain. The glorious Technicolor musical from MGM remains one of the best song-and-dance films ever made, an evergreen classic in the genre. If you can only see one musical, Singin’ in the Rain may be it.

Seventy years young this year, Singin’ in the Rain’s playful antics and dazzling showmanship broke the mold by expanding the cinematic language of musicals. Featured performers Gene Kelly, Debbie Reynolds, and Donald O’Connor produce joyous perfection as they sing and dance with innovative choreography to catchy songs like the irresistible Good Morning. Considered by many the most popular musical in Hollywood history, Singin’ in the Rain is an undeniable classic which hasn’t aged a day since its debut.

The fun, comical story concerns two silent film stars making the transition to talkies in response to The Jazz Singer’s success. Don (Gene Kelly) and Lina (Jean Hagen) are a famous duo in silent films whose success is threatened when talking pictures come around. Don has the voice to make the leap but Lina’s pipsqueak pipes are not star quality. Debbie Reynolds plays the young Kathy, an up-and-coming actress with major talent who tangles with Don. Don and Kathy grow closer, hiding their burgeoning relationship from a spiteful Lina.

Actor and dancer Donald O’Connor provides amazing comic relief as Don’s trusted friend and songwriter, a remarkably physical performance pulled straight from the stage and Vaudeville. The performing chemistry between the three leads is endlessly entertaining. Co-director Gene Kelly stages some of the most impressive and memorable dance numbers ever laid out on screen, from the iconic solo number by Kelly in a raincoat to the trio’s snappy rendition of Good Morning.

The musical masterwork produces screen magic, creating an unforgettable experience of sight and sound. Rarely has everything worked so perfectly together, from mesmerizing costumes and unstoppable set designs, to catchy songs entwined inside the breathtaking choreography. Don and Kathy’s lighthearted romance adds the right dash of heart and screwball comedy to the tight screenplay.

Singin’ in the Rain is for those people who say they don’t enjoy musicals. It’s a movie for everyone. Delightful performances, a witty script punched up with zany comedy, stars at the top of their game, it’s one of classic Hollywood’s shining gems. 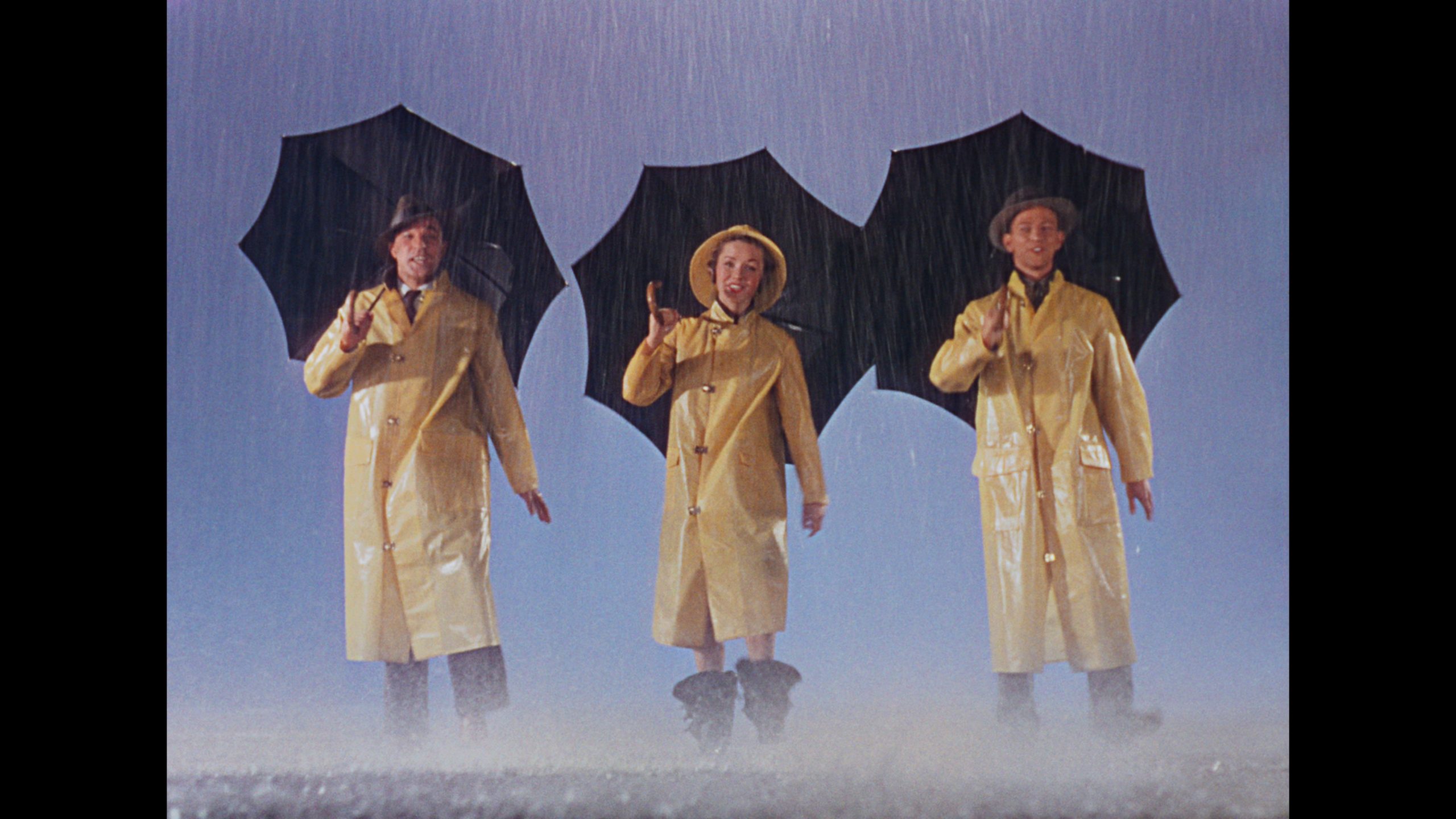 The restored 1.37:1 Technicolor presentation is better than ever in a splendid 4K transfer. Singin’ in the Rain once looked satisfactory on Blu-ray but this UHD is a huge improvement. Better color reproduction, an enhanced grading, and fantastic consistency. The MGM musical’s finer points are more lovingly reproduced with a tasteful HDR10 grading which pulls out a more refined contrast and tighter grain structure. The musical’s lovely costumes and immaculate sets leap off the screen in tremendous definition.

The technicolor film’s dazzling song-and-dance numbers look splashy in 2160p resolution, helped out by the lush color palette and inky black levels. Lots of striking pinks, purples, and greens can be found in the rock-solid HDR. Kathy’s delicate pink costume when she pops out of the cake truly shines on UHD. The iconic number by Gene Kelly in the rain dazzles with clarity, unveiling lost detail and the ingeniously designed backgrounds.

The main feature runs a complete 102 minutes on a dual-layer UHD. Warner provides a transparent HEVC encode, fully capturing the Technicolor element’s crisp colors and grain. There’s been an attempt to minimize unnecessary video processing, producing a film-like presentation which holds up even on the biggest screens. My one complaint, however minor, is a subtle change to the palette with a push towards cyan. The other primary colors are properly saturated.

Warner finally restores the film’s original monaural sound design in a strong 2.0 DTS-HD MA soundtrack. Coming back is the fantastic 5.1 surround mix found on the older Blu-ray in superb DTS-HD MA. It’s a satisfying, careful remix which honors the original sound design while adding to the cinematic experience. The music offers excellent depth and presence, while clean dialogue reproduction boosts the dynamic range.

One may wish a great musical like Singin’ in the Rain would receive an Atmos mix but the recording simply may not require it. The surround mix adds a light touch of ambient support. There are no flashy choices but steady, smooth fidelity presented in full quality.

Warner’s 4K UltraHD release includes a Blu-ray and Movies Anywhere digital copy, which redeems in UHD quality. A slick slipcover is available. Like most UHDs from major studios, most special features are relegated to the accompanying BD. Found on the UHD is the audio commentary and a compilation of all the film’s musical numbers.

The special features are pulled from the 60th Anniversary Blu-ray edition. Some bonus features from the Ultimate Collector’s edition are missing in action.

Musical Numbers (42:46 in 4K) – A complete compilation of the film’s musical segments.

Singin’ in the Rain: Raining on a New Generation Documentary (50:48 in HD) – An upcoming generation of younger stars and choreographers discuss the massive influence this movie had on them as professionals.

Singin' in the Rain