The Kids Are All Right

Where Matrix Resurrections tried making a point of corporate creative culture and the demands, Scream lays blame not on the execs, but the fans. The excessive fans who yes, keep franchises afloat, but have used technology to verbally butcher writers and directors who they believe “stain” their pop culture. There’s no greater villain in Hollywood; Scream gets that.

Scream gets a lot of things, continuing with relentless meta commentary on the widening horror genre, now taking shots at more thematic, intellectual fare. That’s not Scream. Rather than mock, this series plays to its base, gripping not only slasher flicks, but this newly minted nostalgic sub-genre of semi-sequels and half-reboots. Naturally, Scream runs with it, bringing back core characters to battle alongside the next generation, then using the original stars in hilariously egregious ways.

Scream 2022 does what Scream does best

No, smart it is not. Scream doesn’t need to be though, just aware enough to pluck references and in-jokes. Technology allows the callbacks more leeway, including one bit that mimics Alien thanks to GPS.

Originally, Scream paid homage to the VHS and video store era. Neither of those things exist today, and yet, there’s no gag about streaming horror services or how the low budget landscape changed. This new Scream knows the genre’s – and much of mainstream cinema’s – identity exists within online chatter. Characters in-movie watch obnoxious YouTube reviews, defining opinions based on a social media-grabbing, negativity-focused approach. Fans follow that lead before buying tickets, having made up their minds, likely based on a trailer reaction telling them how to feel.

With its penultimate moment, Scream puts social media trolls on blast, turning a holy grail studio franchise against them. As a fifth entry, the stabbings and teen drama barely register a blip on the interest scale. Scream 2022 does what Scream does best though, acknowledging how little characters matter to a slasher movie while planting them in a world that feels real, albeit through a satirical lens.

Courtney Cox, David Arquette, and Neve Campbell factor into the mix, their impact met with a noticeable wink. The finale sees Cox and Campbell side-by-side, making a “moment” for the theater crowd, and one that will still work on revisits through the entire series. VHS and video stores are gone, so Scream instead plays to the theatrical remnants. Maybe it’s smart after all. 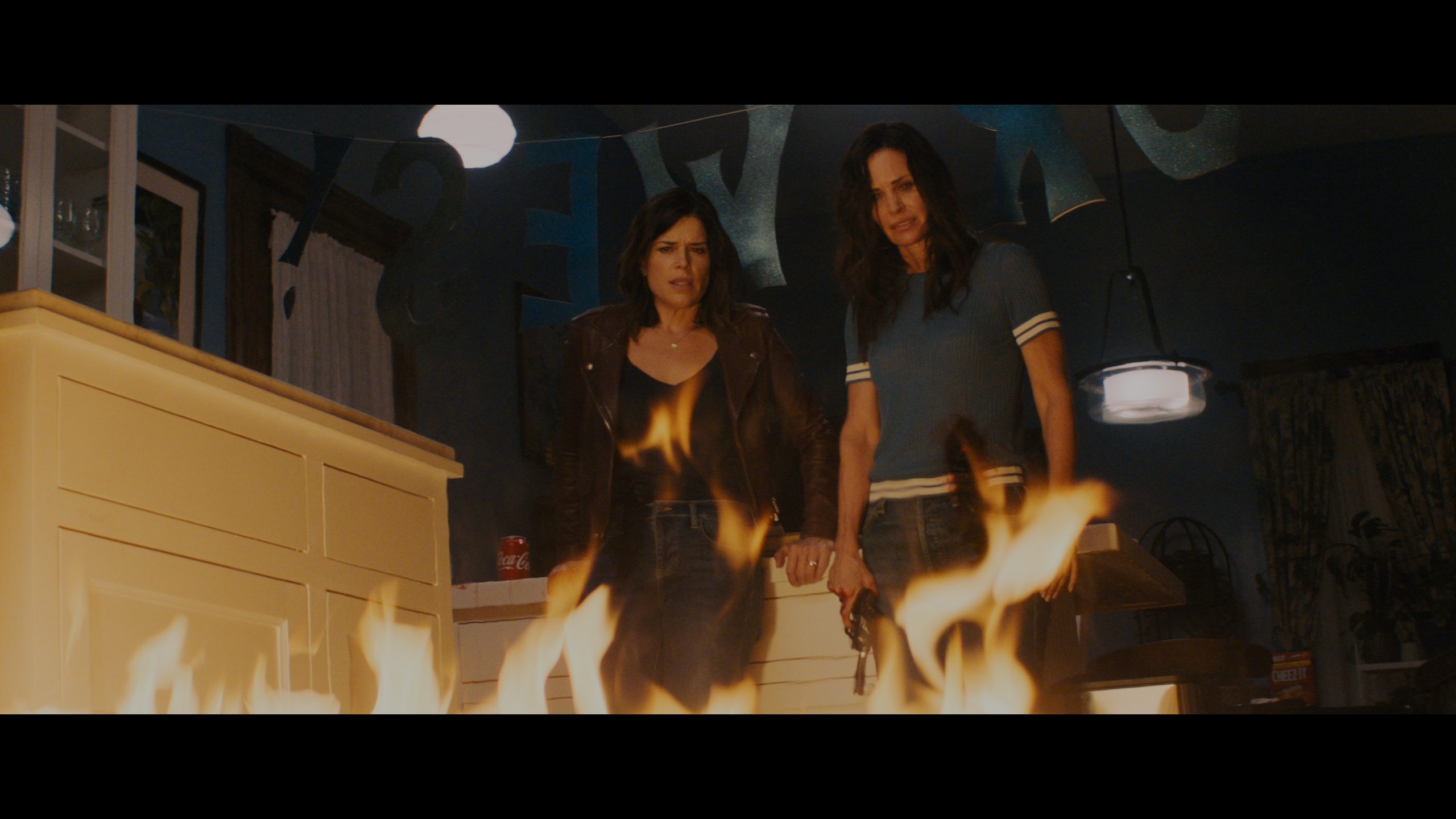 Digitally lensed, Scream overlays the imagery with a stiff grain filter. Whether Paramount’s encode handles it well depends on the scene. In darker shots, it’s a mess. Chroma noise runs rampant along the walls and their shadowy areas. The texture remains in brighter shots, but sans the noise. There, it’s convincingly film-like.

When not a bother, the superlative cinematography appreciates facial definition. Detail comes in bunches, whether mid-range or close-up. Resolution takes advantage of the format, sharpness stellar and consistent. Scream is stuffed with fidelity.

The killer makes their moves timed to jump scares, rattling the subwoofer with each strike or attack. Club music blares during parties to provide a healthy LFE. Bass doesn’t hold back. Dynamics stretch limits in the best way.

Oddly using DTS-HD 7.1 (not Atmos or DTS:X), Scream’s use of position is exemplary. Phones ring in specific channels, odd noises pop up in the rears, and action pans through the full soundstage. It’s fun, using audio to better the film’s genre cred.

Finding a comfortable place amid the current genre trends, Scream’s legacy is preserved in a pedestrian thriller.