You will be forgiven as an American if you wonder why Norwegian pop group a-ha is receiving a full-blown documentary in the revealing a-ha: The Movie. A-ha became superstars overnight in 1985 when their signature tune “Take On Me” hit #1 and became a worldwide smash, helped by one of the most popular and innovative music videos of the 1980s.

The pop group’s debut album sold over ten million units but soon lost the American market with their second album, never regaining a foothold here in the States. A-ha continued having massive success overseas and in Europe, remaining a potent creative force with commercial appeal. They still pull huge numbers on tour thanks to eleven albums and millions of record sales.

A-ha: The Movie depicts a talented band with a lot of baggage and how they’ve gotten to where they are today

Intimate and expansive, the documentary takes a subtle approach explaining the inner dynamics inside a-ha. A-ha: The Movie from Thomas Robsahm traces the group’s history all the way back to its days as three Norwegian teenagers looking far beyond their native country. Lead singer Morten Harket, keyboardist Magne Furuholmen, and guitarist Pål Waktaar-Savoy all dreamed of becoming music stars, inspired by the likes of the Doors, Queen, and Uriah Heep. They journeyed to London hoping to make it big.

The three band members give their personal perspectives in revealing and often candid solo interviews. The semi-authorized documentary recounts their staggering early successes as pop stars while chronicling their struggles as each member went their separate ways in the 1990s. Once close friends, the three a-ha members only reunite today when sharing the stage.

A-ha: The Movie depicts a talented band with a lot of baggage over the years, remaining together despite personal conflicts and ego issues. Their early albums receive the majority of the focus, juxtaposed to their recent touring adventures and the recording for an unplugged album in the past decade.

Pål is the group’s primary songwriter and driving creative force. Which the documentary reveals Morten and Magne grew to resent over the years, as their contributions were minimized or discounted. With his good looks and charismatic front-man personality, Morten inevitably received the bulk of media attention in the band. Brewing rivalries between the trio drove them all to solo careers until realizing a-ha was where their bread was buttered.

The documentary paints an interesting picture of the pressures faced by young bands when a song like “Take On Me” rockets them to fame early in their careers. Fans now expected a pop sound after its success and the group felt pressured to fit that mold. Anyone who survived the 1980s can remember the iconic music video for the catchy song, a bewitching blend of live-action and hand-drawn animation.

Tight, polished, and loaded with popular songs from a-ha, The Movie captures a personal side of the Norwegian band from different angles. It should become a prized treasure for their many fans across the globe. 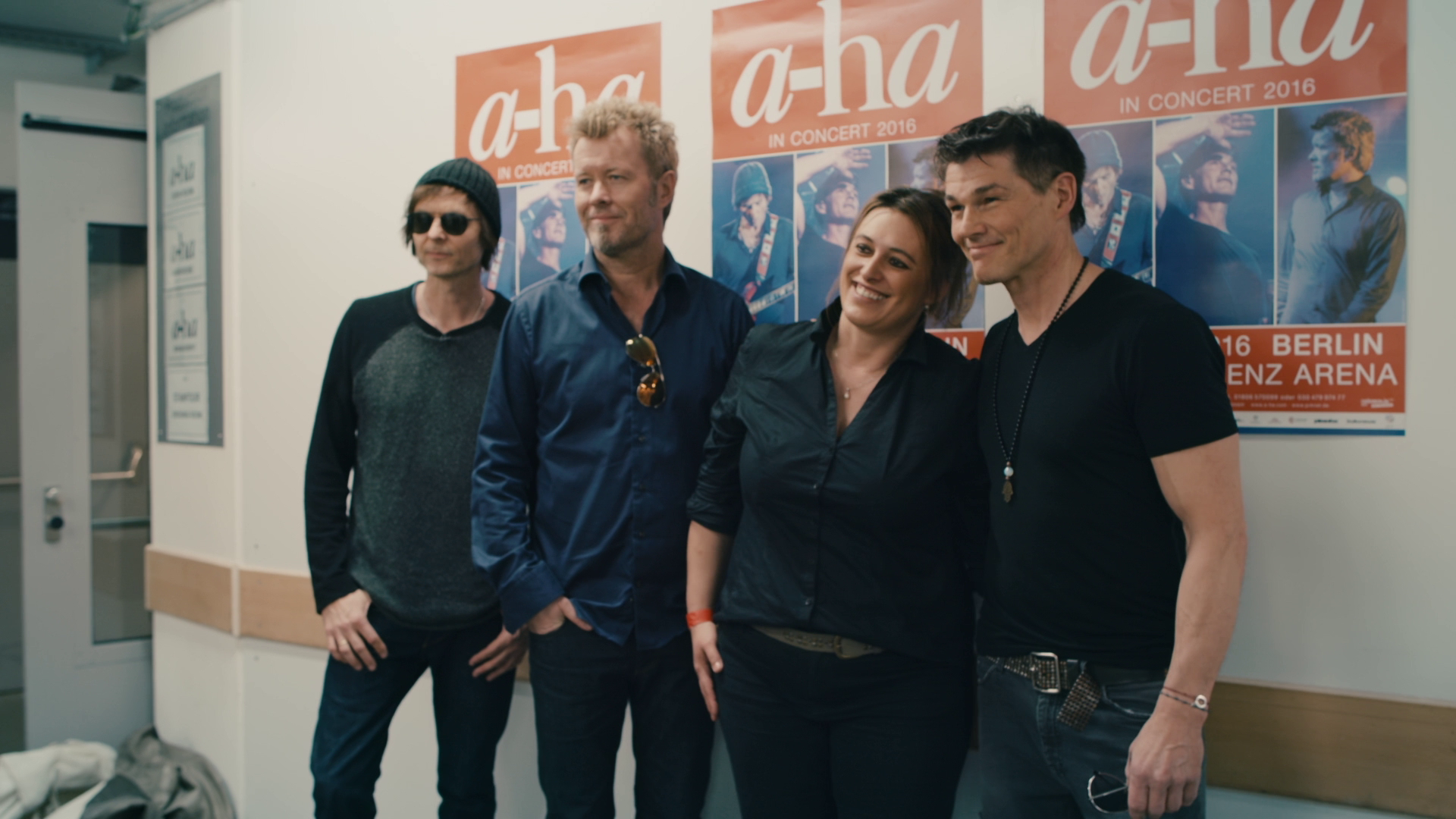 A-ha: The Movie has nice, sharp definition in mostly pristine 1080p resolution. The 1.78:1 presentation incorporates older, primitive footage from their whirlwind early days in the 1980s through a mix of archival photographs and standard-definition sources. The documentary runs 108 minutes on a BD-25, encoded in blameless AVC. Recently-shot interviews offer resounding clarity and newer backstage material is surprisingly crisp.

A mostly perfunctory 5.1 DTS-HD MA soundtrack showcases the band’s music while offering perfectly clean dialogue. Expect to hear bits of “Take On Me” more than once, though other hits from their catalog are sprinkled throughout the documentary. English and Norwegian dialogue exchanges are both heard in a-ha: The Movie.

Talking-head interviews don’t offer much chance for surround potential and archival recordings from the ‘80s and ‘90s have minor limitations. It’s a mix with most action up-front, heard in stark fidelity. The newer rehearsal footage gives the soundstage a bit more to work with in terms of depth and channel separation. A pleasant mid-range and nice bottom end give the music excellent range and tonality.

No optional English subtitles are provided. All Norwegian dialogue has forced English subtitles in a white font. A secondary 2.0 PCM soundtrack retains the smooth fidelity of its surround sibling with a smaller, more focused soundstage.

There’s no doubt a-ha: The Movie is light on special features. Lightyear Entertainment only provides three short deleted clips as bonus material. The BD arrives in a clear case and the disc is coded for all regions.

Magne Tells Thomas The Truth (00:45 in HD) – A deleted scene with Magne revealing a fault line which runs within the band.

Paul Isn’t Feeling It (03:11 in HD) – A trying rehearsal session is unveiled in this deleted scene.

Bridges Reunites After 39 Years (02:30 in HD) – Pål and Magne are shown waiting to reunite with members of their original band from when they were teenagers before a-ha.