Much is discussed regarding money throughout Death on the Nile. Onboard a wedding vessel, the rich mingle with the socialists and the poor. Set immediately post-Depression era, there’s a lingering sense this luxury matters little, even if the hosts fail to grasp those feelings.

Death on the Nile likes money. It’s elaborately staged, cruelly romantic, and surreal in both its physical and digital beauty, all of which uses the budget for maximum showcase appeal. Like the wealthy at the story’s center, those funds hide a truth. In Death on the Nile’s case, that truth is tepid storytelling.

Death on the Nile projects confidence via glossy imagery

Born of Agatha Christie’s pen, the mystery styling is all hers. Each character locked aboard a yacht holds a potential murder motive, leaving Poirot (Kenneth Branagh) assigned as the lone detective outing the killer. Being invested in love, Death on the Nile uses that to develop Poirot, beginning in wartime to design Poirot around his past physical and emotional scars. There’s some depth to the character, albeit limited, while supporting players fall to archetypes.

There’s the disapproving mother, the jealous lover, the seedy lawyer, jilted exes, and others. Death on the Nile does well to raise suspicion among any one of them – or multiples working in tandem. What’s lacking is broad tension, leaving the narrative dangling between the few exciting blips.

Again, Death on the Nile projects confidence via glossy imagery, a trick for the eyes that aside from appealing green screen artificiality, ultimately feels artless. The design is determined to bring people a “fly on the wall” perspective, going into the lives of those grossly fortunate to flaunt wealth, but then joyfully watch their happiness dissolve as victims pile up. That’s almost sadistic, if with a point; the overwhelming theme is that of wealth destroying rather than fixing. Those who need to learn this do so too late. 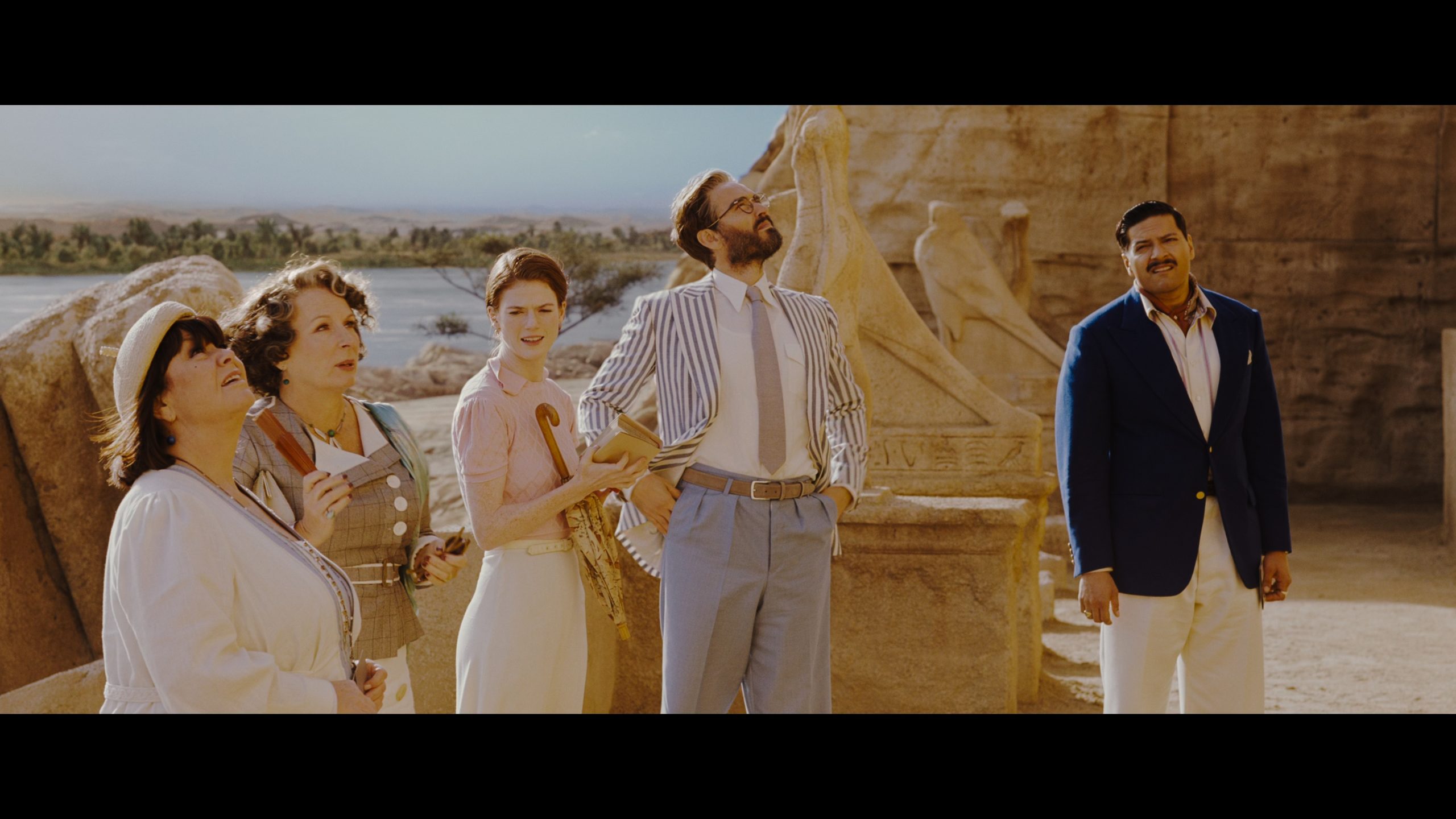 A luxurious production, scanned at 4K from a high-grade film stock, Death on the Nile looks spectacular. Elegant sharpness brings every scene to life, wide shots and close-ups equally impeccable in resolution. The finest textures appear, the only hangup(s) being rougher grain reproduction, the first trouble spot when Gal Gadot appears on the club steps. The hazy smoke is too tough a challenge, but it’s still gorgeous. Phony digital sets, certainly rendered at 2K, break up the perfection too, but that’s part of the source.

The HDR pass is equally stellar. Highlights glisten off water, and heat adds sweaty faces, additionally bold. Even interiors contain the same intensity, whether natural light or from electric bulbs. Dynamic shadows complete the dimensionality, letting Death on the Nile breathe and leap from the screen.

Heavily warmed, the cast appears bronzed by Egypt’s sun. Unnatural, but attractive. That’s helped by the surrounding primaries, all vivid. Scenery produces exemplary saturation, at times glowing, making the most from the digital effects, adding to their surrealism.

Opening during WWI, cannon fire slams into the ground, letting viewers know Death on the Nile’s Atmos mix isn’t toying around. Each blast demonstrates superb force, ground erupting into the surrounds, if not the heights in any notable way.

Mostly that stays true for the whole, other than occasional ambiance slipping overhead. The design does keep life flowing through the surrounds though. That varies from birds to chatter in markets, or even water splashing about. Later moments include a sandstorm that brings together the low-end and positional channels for a brief home theater moment.

Death on the Nile sticks around the center though, no surprise given the dialog-driven nature. Balance is precise.

The Blu-ray contains everything. Four featurettes, generalized and dull (the best focused on set design), are followed by deleted scenes.

Death on the Nile

Death on the Nile is rich and luxurious, even overly glossy, as a capable murder mystery begins to take hold.