Purely an invention of American cultural normalcy, The Desperate Hour follows Naomi Watts – and almost Watts alone – as she jogs through a forest, learning her son’s school is locked down during an active shooter situation.

There’s inherent intensity to the scenario; Watts’ emotion and fears pour from her face as she frantically tries making contact with anyone nearby to learn about her son. Desperate Hour exists with purpose, putting a narrative behind the parents who all-too-regularly experience mass shootings. Mostly, they’re viewed in nightly news clips, with mere seconds to extrapolate lives lost or the terror endured. Watts becomes their voice.

Desperate Hour comes across as helpless, but made out of a feeling of necessity

Sadly, Desperate Hour’s construction feels too inauthentic, and likewise dull. Barely 80-minutes long, the title is genuine since the camera swirls listlessly around Watts as she makes phone calls to disembodied voices who go unseen. Capable an actress or not, Watts can’t lift the film on her own, even as the grim real world story continues. Streaming news coverage between her countless calls, Watts listens, all that she can do, helpless, same as anyone else viewing albeit with greater stakes given her family’s involvement.

Desperate Hour exists as a statement piece, yet lets the material speak, driving organic horror, not speeches or exposition on gun control. The script is designed to shock on its own, trying to make personal these tragedies as opposed to what happens during the news cycles. Yet it’s flailing, pointlessly, because if grade school kids gunned down in their classrooms doesn’t change anything, neither will this bland, clumsy, fictional interpretation. Desperate Hour comes across as helpless, but made out of a feeling of necessity. That’s genuine, but the end result languishes in mediocrity. 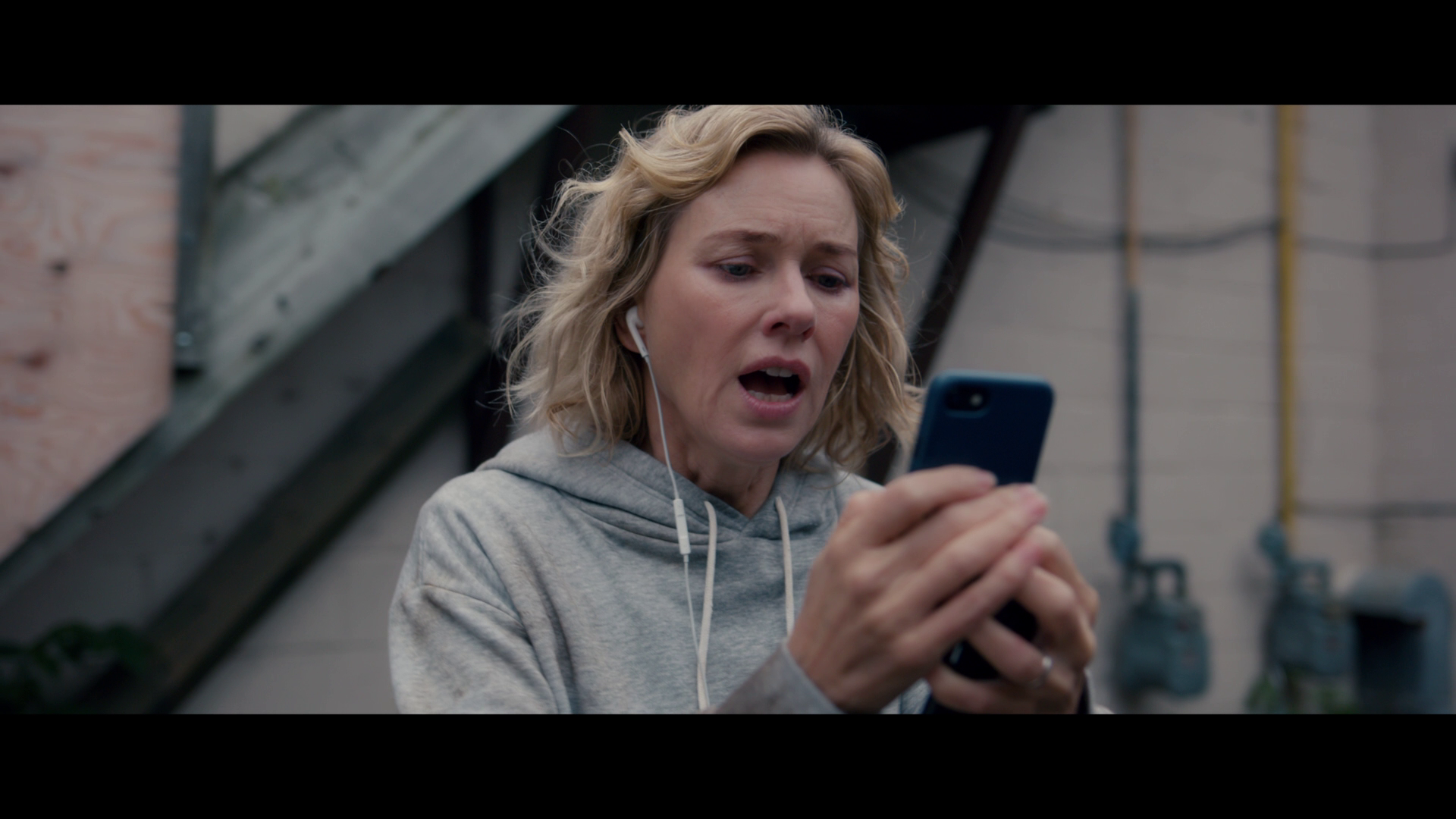 A pedestrian digital source generally runs clean. Chroma noise shows in spots, nothing severe, if distracting. Clarity allows detail in full, making the most of scenery, notably the forests. Average definition overall makes the rest, like the close-ups revealing perfectly fine if unimpressive definition at this point in the format’s life. Some lesser shots intrude, likely sourced from a different lower grade camera, and others clearly reveal a miserably blotchy CG environment.

Via the graded palette, there’s a clear push to keep things on the cooler side. However, the fall season adds primaries galore, some brilliant yellows and greens able to break free from the unnaturally dull flesh tones. When vibrant, Desperate Hour produces an excellent, attractive palette.

It’s a bright one too. Contrast bulks up, crisp and bold. Black levels do their best work as needed.

Offered in stereo and 5.1 DTS-HD, the final decision favors the surround track. Ambiance keeps the naturalistic scenery active in the soundstage as birds call out or water flows through streams.

Subwoofer support chimes in to add weight to the music. That’s it.

Desperate Hour tries to compartmentalize an real world American nightmare, but it’s ultimately flaccid as it stalls from the outset.