In honoring space race era sci-fi, Moonfall’s concept – the moon will collide with Earth – allows for kooky disaster movie iconography. Moonfall does have a little of that; tidal waves and comets devastate the surface as an impromptu astronaut trio plan to save the world.

But director Roland Emmerich needs more than colliding celestial bodies. Moonfall litters itself with conspiracy theories, and in conjunction with Chinese financing behind the production, the plot seems intent on making western democracy appear dishonest, run by cowards. Leaders run as the moon approaches. They quit. Others hide in bunkers, their fingers on the nuclear button, because science requires an intelligence American military minds can’t process.

The smart one? A part time janitor who believes the moon is a metallic megastructure – and he’s right in Moonfall lore. Not just an alien-made sphere, but one that holds the source to humanity’s very existence. Of course.

Moonfall encapsulates the modern blockbuster ideology. CG imagery makes anything possible. Audiences are bored. A catastrophic extinction-level event isn’t enough, so not only do the eye-rolling car chases (jumping between gravity pits) over exert themselves, the script does too, flailing to be different without an ounce of credibility.

There is an attempt at heart, because all disaster movies need soapy relationships. Moonfall’s involve space-bound tragedy, broken marriages, shared custody, and general resentment toward those forced to work together. None of this works, and its phoniest, Moonfall’s embarrassing inclusion of a Chinese foreign exchange student looks as shamelessly inserted to appease foreign box office as it is. She means nothing to the story, making this inarguable pandering, not an extended hand.

Emmerich’s previous flicks at least offered memorable destruction; Moonfall does not. It’s odd that Moonfall actively avoids showing monuments and landmarks topple. Debris instead blasts mountains with shockwaves, or lets gravity toy with the oceans. That’s not worth the two-hour runtime that spouts off braindead dialog minus any self-awareness. The only chance at success would be to self-mock Emmerich’s own brand, yet Moonfall never so much as smirks. 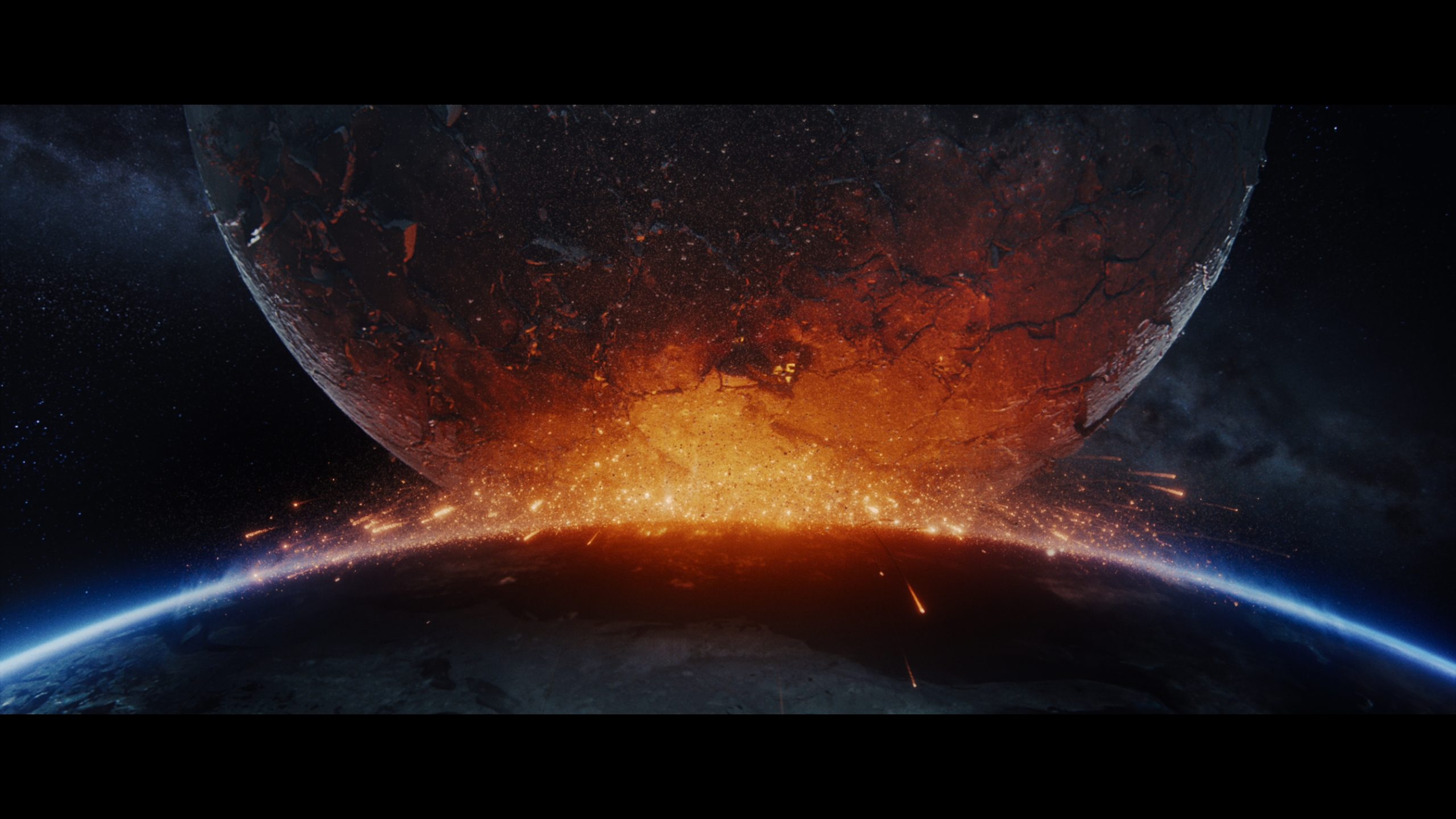 Shot digitally, Moonfall is given an artificial grain structure in post. Either it’s poorly applied or Lionsgate’s encode can’t keep up. Either way, there’s a messiness inherent to Moonfall, and at times, ringing suggests the slightest sharpening. That’s unfortunate.

Behind all of this, definition performs decently. Facial texture is fair, but the jump to 4K doesn’t make a noticeable difference over the Blu-ray. The resolution bump isn’t immediately apparent. Gains all come from the Dolby Vision pass that appears aggressive, blasting the screen in brightness and contrast. Breaking the pure blackness of space, sunlight reflects off metal or the Earth’s surface. Moonfall looks spectacularly intense because of this, the dimensionality suitable to an Emmerich blockbuster.

There’s also a stable color palette, running on the cooler side, yet not ignoring primaries. Intensity of blues and reds remain consistent. Flesh tones favor the chillier side.

A beast. A monster. A demon. Call it what you want, but Moonfall’s ridiculously massive low-end power will test any system’s limits. Explosions rattle rooms, and collisions spare nothing on impact. Range shows off at every opportunity, and it’s widely varied. Car engines push a light LFE response, and the cataclysms feel appropriately mammoth.

Exquisite design keeps a constant hold on the soundstage. Everything from doors closing to voices to electronics humming spread around the space flawlessly. Motion becomes a constant factor, even during dialog sequences. The score keeps momentum going too. Overheads have constant presence when action picks up, or even when not – helicopters pan through the heights frequently.

Director Roland Emmerich joins writer/producer/composer Harald Kloser for a commentary track. A three-part making of runs a mammoth 58-minutes, but it’s generally hollow marketing intermixed with production details. Next is a 26-minute piece on the moon and its purpose to the world throughout history. Finally, four in-character videos from John Bradley sell the conspiracy theories Moonfall is based on. Note these bonuses appear on both the UHD and Blu-ray.

Even beyond the ludicrous premise, Moonfall’s conspiratorial nonsense doesn’t even deserve the two hours needed to appreciate the disaster movie destruction.