When arriving at One-Armed Boxer’s third act and an entire school’s worth of kung-fu students lie still on the mats, all dead, consider this war started because two guys argued over who deserved to sit at a restaurant table. Testosterone knows no limits.

One-Armed Boxer doesn’t defy the Shaw Brothers norm. Considering the timing – an early ‘70s release – it was, somewhat, an innovator. Driven by a nationalist theme, star Jimmy Wang-Yu fights for his pride and revenge, but not only against a local rival. Villains bring in Tibetan monks, Japanese martial arts masters, Thai kick fighters, and other Asian opposition, representing Hong Kong’s anxieties toward foreign invasion, or loss of independence. It’s not subtle either, going so far as to put a Hong Kong actor in black face (but failing to paint any other body part) to pass as Middle Eastern, anything to diminish outsiders.

The script evades lengthy exposition or talkative scenes; One-Armed Boxer moves frantically, the fights a constant, at one point nearing 20-minutes straight of brawling. Even the traditional training montage cuts itself short, but a few minutes total, and after losing his arm, Wang-Yu’s recovery is recounted in a few still images, nothing more.

Still early in Shaw’s genre reign, choreography lacks the spirited fire seen in later entries, although it’s worth noting the undoubted challenges for Wang-Yu, one arm tied up under his costumes. One-Armed Boxer appreciates surrealism too, bringing in wireworks and wacky, cartoon-esque sights such as Wang-Yu bouncing upside down on a single finger. It’s delightfully goofy.

Videogame fans know the fighting genre owes much to these Hong Kong imports, and One-Armed Boxer more than most. After training, Wang-Yu can turn into a torpedo, flying across the screen like numerous interactive characters would decades later. That outlandish creativity helps One-Armed Boxer feel and look distinctive, even when stacked against Shaw’s own output still to come in their golden era. There’s an energy rare to these films, and even if the actual fight design lacks spunk, the number of thrown kicks offsets that disappointment. 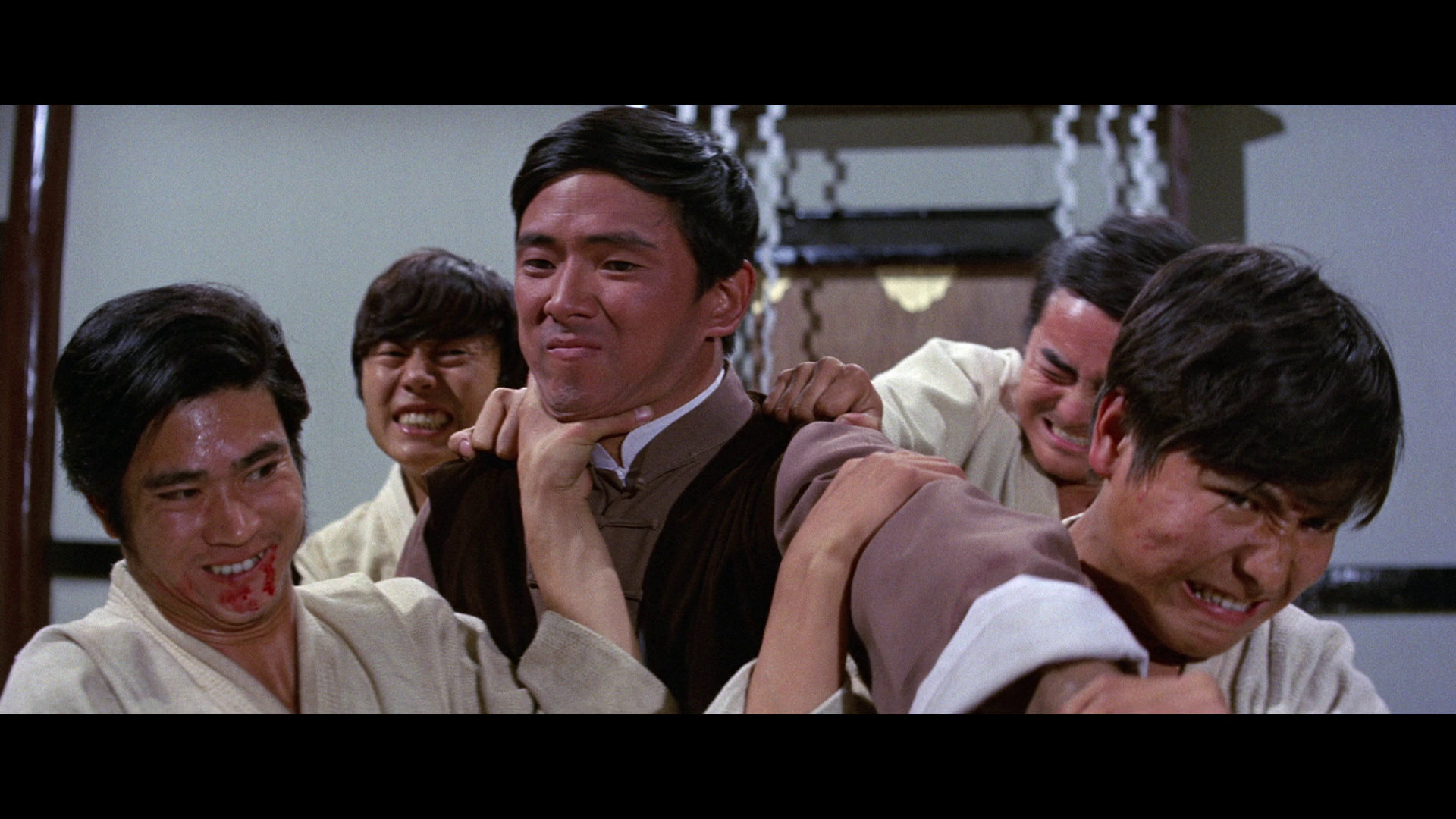 Arrow licenses a decent if unremarkable 2K scan for this Blu-ray. Damage on the print is minimal, and grain is intact. Wide shots leave behind the suggestion of slight sharpening, although it’s to minimal effect. Detail does flourish, often organic behind the excellent, clear encoding. Facial definition in particular brings One-Armed Boxer easily into the HD era.

There’s a nice level of contrast on offer, keeping the imagery bright. Modest black levels do well enough on their end, if not hitting the deepest points.

Two Mandarin mono tracks are on offer, each delivering different scores. There’s also an English dub, and everything is in DTS-HD. Music is significantly strained no matter the choice, at times almost unintelligible as muddy bass runs rampant. Top-end treble isn’t much better, and that includes the iconic fight sound effects.

At least the dialog stays firm. Scratchy, even worn of course, if consistent.

Frank Djeng is the host for this disc’s commentary. An interview with Jimmy Wang Yu dates back to 2001, running a hefty 41-minutes as the actor recounts his career. Alternate credits, trailers, and images close up shop.

A pure Shaw Brothers delight, One-Armed Boxer is a mixture of nonsense, nationalism, and near constant brawling.