We – as in Earth’s entire population– exist thanks to the Marvel universe. At least, that’s Eternals’ heady theological premise, sending the comic book franchise in a philosophical arena.

The issue then, if Eternals existed and performed miracles across centuries, is how humanity evolved alternate beliefs. As shown in numerous flashbacks, the heroes interacted with people, helping them develop technology, giving them light shows, and defending against evil creatures. Yet cultures still developed their own religions, with far less consequence than Eternals’ battle.

Eternals is talkative, a slog, and meandering

Eternals keeps these ideas locked to personal fables. Each member from this team suffers internal conflict, whether based on love, maturity, or their place in the cosmos. Marvel/Disney shut out any grander implications, which the Eternals very existence would logically incite. The studio aims for – and succeeds – at finding an inclusive cast, yet Eternals isn’t brave because other than matching current social norms, it’s not willing to engage any commercially disruptive or controversial material. To do so is to suggest blasphemy against the world’s religions, and no PR studio is equipped to handle that backlash.

What’s left lacks bite despite a concerted effort to raise Marvel’s age limit. Eternals is talkative, a slog, and meandering. Exposition happens at a galactic scale, making it difficult to connect when Sprite (La McHugh) struggles with a child-like crisis, or Kingo (Kumail Nanjiani) worries about a Bollywood career. Those matters, much as they mean individually for these characters, lack importance compared to Earth’s pre-determined destruction. Plus, considering the Eternals lived for thousands of years, the timing for an emotional outburst is suspect.

Consider too, Eternals must contend with human-born cataclysm, including Hiroshima, which is viewed post-mushroom cloud, if not the actual suffering of victims. Eternals’ heady ideas require a harsher lens with which to view them, something Marvel isn’t prepared to do. The battle is less about gods and their spawn than it is whether humanity deserves a chance given the violent evolution and self-destructive streak. The latter though is sanitized, diminishing the perspective.

What results is a script inserting romance as a means to avoid a kids-friendly labeling, certainly boring that audience, and too rudimentary for adults. Aiming for passionate stakes makes the routine laser beam-eyes and magic spells appear ludicrous, something off-set by sarcastic humor in other Marvel films. Eternals barely results in a smirk, but if it drew some tears, maybe it had a chance. 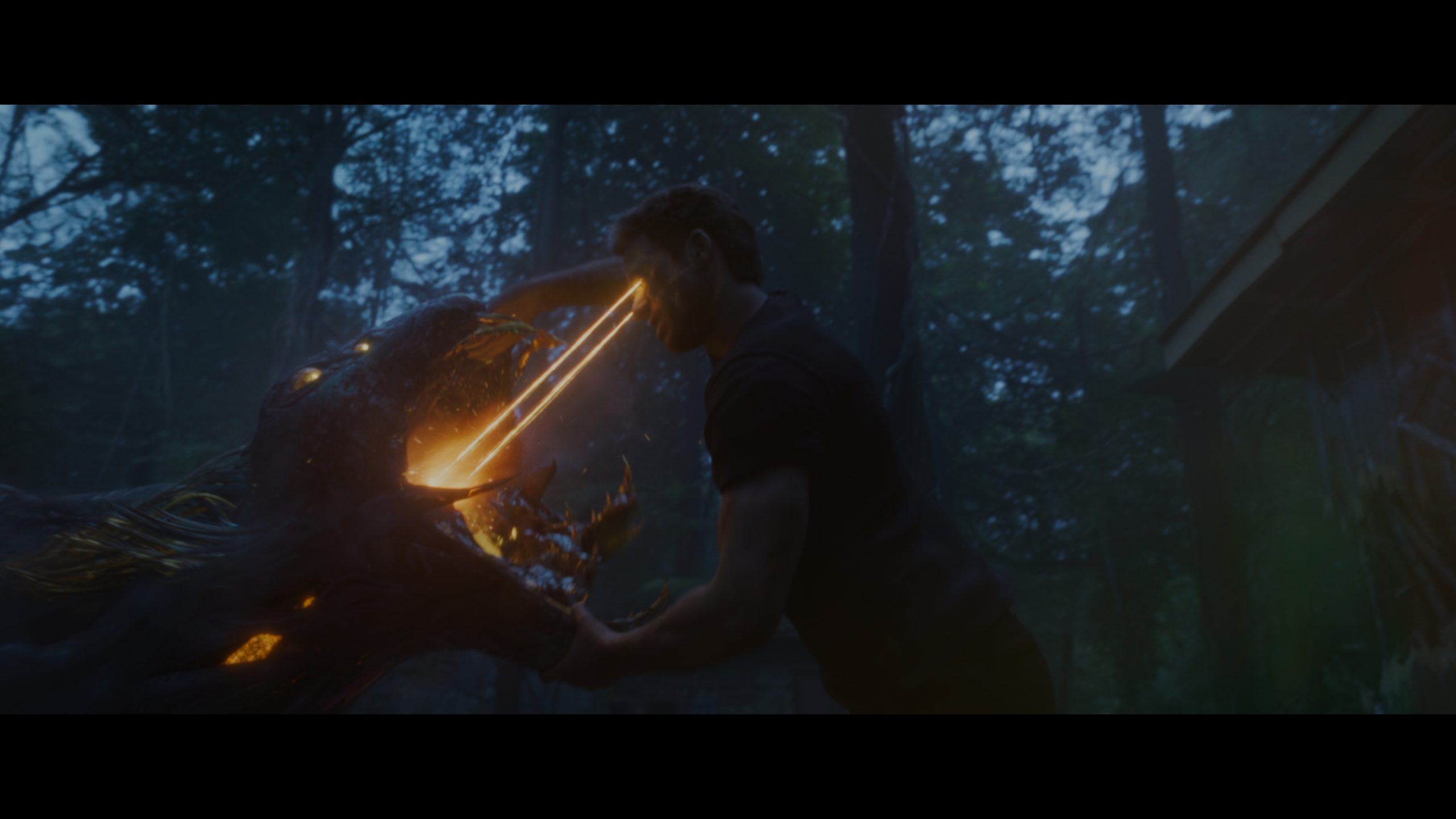 Although listed as a 4K digital source, Eternals doesn’t look the part. It’s disappointingly bland, lacking sharpness and the encode isn’t impressive either. A light grain filter looks more akin to compression artifacts. That reduces/restricts fidelity. Menial texture appears fine, but not matching up to better 4K masters. Instead, the equivalent is the streaming feed.

Part of the issue might be the lackluster HDR too. Flattened cinematography only lets black levels fall so far into shadow. Highlights, while intense in places, lack potency. Magical spells should glow far brighter to sell their effect. Instead, things like street lights and LED billboards reach greater boldness.

Bland color limits things too. Primaries don’t display much saturation, and the graded palette doesn’t employ any real zest. Flesh tones look pale, as if the entire movie were stuck in overcast. A big Bollywood number filled with vivid costumes doesn’t even pierce the haze.

Luckily, the Atmos track betters Disney’s norms on this format. There’s plentiful range to go around as Deviants stomp about, doing fine work to create scale through the low-end. The Eternals’ attacks hit forcefully too, whether it’s beams searing the air, or punches. Arishem’s voice produces a steady thump as he speaks. For the finale, a volcanic eruption proves monstrously powerful.

Mixing makes sure the full soundstage is involved. Motion is a constant. Action scenes travel the full width, surrounds precise, and stereos active. Heights find their moments to stand out, but seamlessly fit into the track. Ambiance runs high whether on modern city streets or in historical bars. There’s constant activity making use of positional channels. Eternals rates as one of Disney’s better audio efforts on the format. Maybe the studio is listening to the community… maybe.

Director Chloe Zhao joined visual effects supervisors Stephane Ceretti and Marten Larsson for a commentary, but only on the Blu-ray, as with all these extras. Two bland featurettes come next, then a blooper reel and deleted scenes.

Eternals is a mature, surprisingly rich tale of creation and humanism, but ponderously slow as it doles out exposition to set up Marvel’s theological grounding.