Standing in the long shadow of heralded and acclaimed shows like Batman: The Animated Series and Batman Beyond, The Batman never really caught on with adult fans thanks to a divisive art style. The animation pushed more action and movement at the expense of some truly questionable character designs. Batman’s iconic costume with the yellow emblem remains intact and Gotham itself has an oddly timeless feel.

However, a Rastafarian-inspired aesthetic for the Joker quickly became fodder for jokes within the fan community. The Penguin looks more animal than man, inspired by Danny DeVito’s take in Batman Returns. They end up being the most important recurring villains.

The Batman takes its sweet time opening up the Caped Crusader’s world, possibly taking a cue from the contemporaneous Batman Begins

The action-driven series often feels like a vehicle for selling toys, courtesy of Mattel. The storytelling is simplistic with an eye on keeping everything manageable for those under ten. In that regard The Batman capably services its intended target audience.

The Batman takes its sweet time opening up the Caped Crusader’s world, possibly taking a cue from the contemporaneous Batman Begins. Season one opens with just a few bare essentials of the Batman mythos – a mid-Twenties billionaire Bruce Wayne fights crime in Gotham as Batman, largely by himself with support from Alfred. One of Batman’s many gadgets on the show alerts him whenever there is crime.

It’s all about establishing the Bat’s rogues gallery early on, introducing villains like Mr. Freeze, Bane, the Penguin, Firefly, Catwoman, the Joker, Clayface, and others. The series introduces new supporting characters in Batman’s world such as Det. Ellen Yin (Ming-Na Win). The solo adventures highlight Batman’s tech reliance more than any series since Adam West’s Batman from the 1960s. They even brought Adam West in voicing Gotham’s mayor.

The show’s producers finally relent by season three and expand into Batman’s more familiar surrounding cast. A teenage Barbara Gordon is introduced, quickly becoming Batgirl. Her costume design is probably the show’s only lasting influence, partially inspiring the popular Batgirl of Burnside costume which is soon coming to theaters in the live-action movies. It’s wildly popular in the cosplay community.

A much younger Dick Grayson is also added to the mix, ultimately becoming a school-boy Robin. Apparently Robin had been off-limits during the first two seasons thanks to the Teen Titans cartoon running at the same time. He’s more of a sarcastic, arrogant troublemaker than usual, incorporating aspects from Jason Todd’s personality.

The Batman finally settles into a nice groove by seasons four and five, attempting more complex narratives and integrating this Gotham into a wider world of DC superheroes. Season five sees Batman meet up with heroes like Superman, Green Arrow, and the Flash. It’s clearly the high point for the action-adventure cartoon. This is when the show finally started gaining more fans. When Harley Quinn appears, the show’s producers wisely bring in Paul Dini for her episodes.

Unfortunately the series ended after five seasons, right when the animated series started growing beyond its toyetic origins with more sophisticated storytelling. The action-packed cartoon is mostly forgotten these days except by the children who grew up with it in the 2000s. 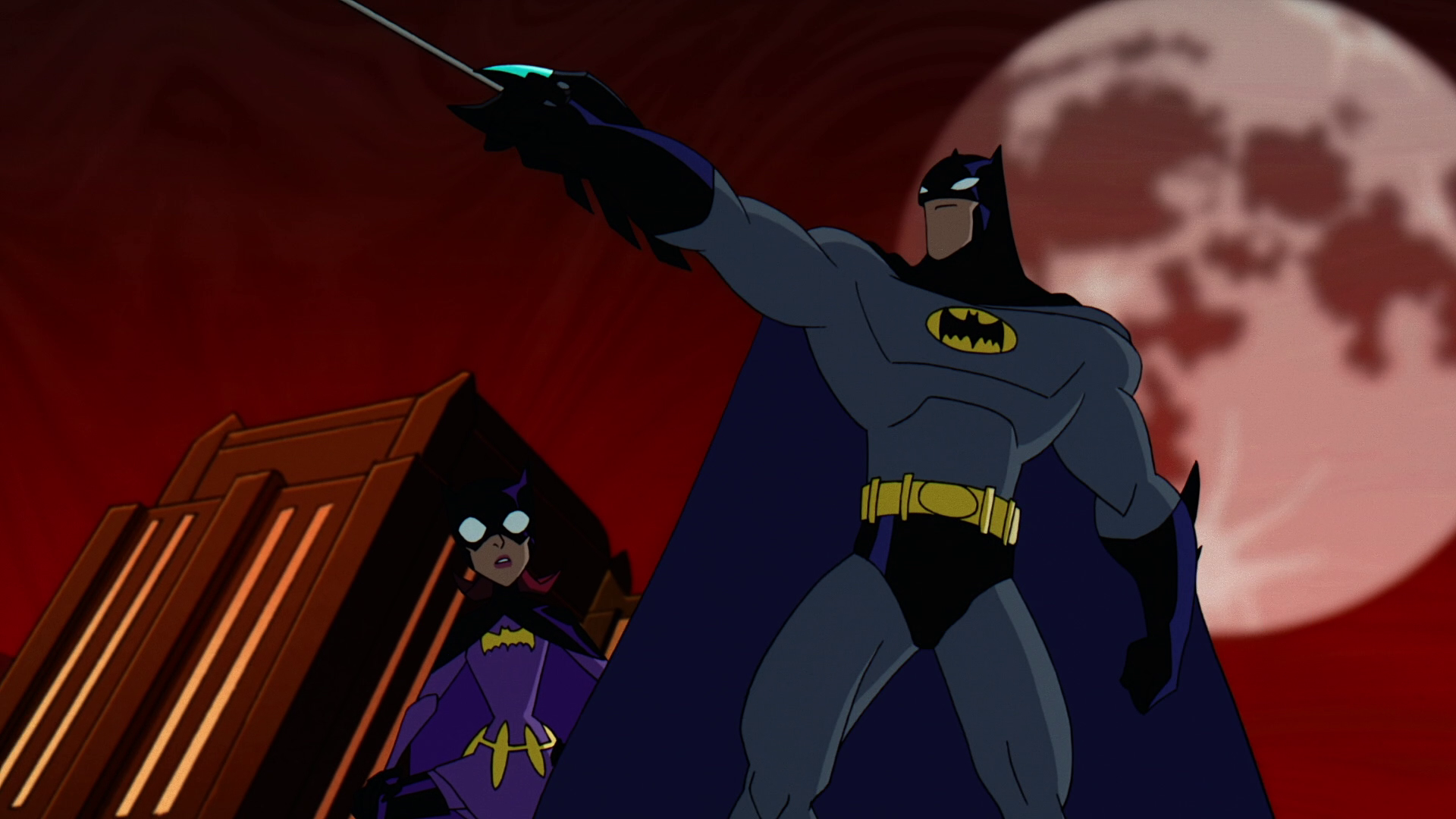 The big news is that this Blu-ray set gives us The Batman in its native 1.78:1 form, the purest representation of its animation since making its debut on home video. The DVD sets, possibly designed with kids in mind back in the day, were awful 4:3 presentations riddled with interlacing and other artifacts. This Blu-ray presentation is a real leap in picture quality coming from the mediocre DVD sets, giving us the uncropped widescreen animation. Colors are better than expected and there’s a crisp sense of definition for traditional two-dimensional animation.

Unlike earlier DC cartoons, The Batman was fully animated in native HD quality from the beginning. Using the common Ink and Paint production method from the era, the lively line-work and fluid action jumps out in 1080p video. For a long-running broadcast and cable series, the animators take chances with creative designs and an impressively diverse palette. The radical designs don’t always hit the mark and facial details are sometimes messy.

All 65 episodes of The Batman are included on six BD-50s. Encoded in AVC, it’s difficult determining if the frequent banding and posterization are baked into the animation or a result of shoddy encoding practices. Early HD cartoons often had terrible banding since most animation studios hadn’t yet gotten a grip on proper dithering.

The Batman on Blu-ray surpasses expectations. While the animation is occasionally rough with a few problematic designs, the surprisingly robust video quality reveals an ambitious aim for early HD animation.

Primary audio is an engaging, well-designed 2.0 DTS-HD MA soundtrack with upbeat orchestration. Moody musical cues and crystal-clear dialogue are nicely placed within the fairly powerful stereo mix. There’s a decent amount of separation and panning. The sound design has some kick and a healthy mid-range presence. Bearing in mind it’s a children’s show made for cable, this is limited but appealing audio.

Fans should know The Batman Vs. Dracula, a fantastic standalone 2005 movie, isn’t included in this complete series set. Made by the same creative team and set in the same continuity, the movie is frankly better than anything seen in the series itself. Fans can only hope someone at Warner Archive decides to issue it on Blu-ray.

The entire series comes on six discs, arriving in a slightly enlarged Blu-ray case with a cardboard slipcover. The best bonus is the included digital copy, which redeems all five seasons in HDX quality on VUDU. A small episode guide is inside the case.

Most special features are ported over from the original DVDs with one new featurette for good measure. Many of the older special features were intended for younger children, voiced in-character for entertainment.

The Dark Dynasty Continues (15:56 in HD) – Key cast and crew members discuss the challenges of remaking another Batman cartoon within the parameters of studio mandates and character limitations. It’s a well-rounded overview covering voice actors and producers as they go into the show’s background and development.

Joining Forces: The Batman’s Legendary Team-Ups (25:21 in upscaled HD) – How the series’ producers adapted the DC “Team-Up-Tales” approach from the comic books to the screen.

The Batman Junior Detective Challenge (05:28 in upscaled HD) – Alfred tests your detective skills with The Batman: The Complete Series challenge.

The Batman Junior Detective Exam: Level 2 (04:44 in upscaled HD) – Pass The Batman test of knowledge with the level 2 exam.

New Look, New Direction, New Knight (05:45 in upscaled HD) – Go behind the scenes to explore the development of The Batman television series.

The Batman: Season 4 Unmasked (09:22 in upscaled HD) – A behind the scenes look into the making of Season 4.

Full disclosure: This Blu-ray was provided for review by the label. This has not affected the editorial process. For information on how we handle review material, please visit DoBlu’s about us page.

The Batman: The Complete Series