Director King Hu’s Come Drink With Me is an important historical marker for the wuxia genre, one of its most seminal films. The 1966 Shaw Brothers production stars Pei-pei Cheng, Hua Yueh, Siu-Tung Ching, and Ying-Chieh Han. Pei-pei Cheng’s central role turned her into a genre favorite, culminating decades later in Crouching Tiger, Hidden Dragon as the villainous Jade Fox.

King Hu’s pivotal work on Come Drink With Me would influence narrative and character themes in wuxia for years, setting a basic template which grew wildly in the 1970s and beyond. The fights are primitive and comparatively crude. This isn’t the highly developed choreography and intricate stunt work seen in Shaw Brothers classics like Legendary Weapons of China some years later. King Hu creates an adventurous blend of drama, action, and mild comedy. There are even a couple interludes when Come Drink With Me threatens to become a musical.

Bandits take the governor’s son hostage and a mysterious official named Golden Swallow (Pei-pei Cheng) seeks answers about his abduction. Golden Swallow is actually a woman looking for her brother. Pretending to be a man, she receives help from a surprisingly capable drunken beggar (Yueh Hua). Nicknamed the Drunken Cat, he’s secretly a master of the martial arts and full of surprises. There are secret techniques to be mastered, shifting alliances, and Golden Swallow fighting off an entire clan of bandits by herself.

Come Drink With Me has many firsts in the genre. A young Jackie Chan is supposedly in the film as an extra. The final showdown introduces supernatural kung fu moves in a riveting battle between brothers. Pei-pei Cheng’s female character was revolutionary for wuxia, a woman taking charge as a strong protagonist and fighter. She became an inspiration and star.

If you’d like knowing where many familiar cliches developed in martial arts movies, Come Drink With Me is essential. It’s not a flawless movie by any means, experienced kung fu fans might wonder what’s the fuss about its sloppy fighting and generally stilted battles. 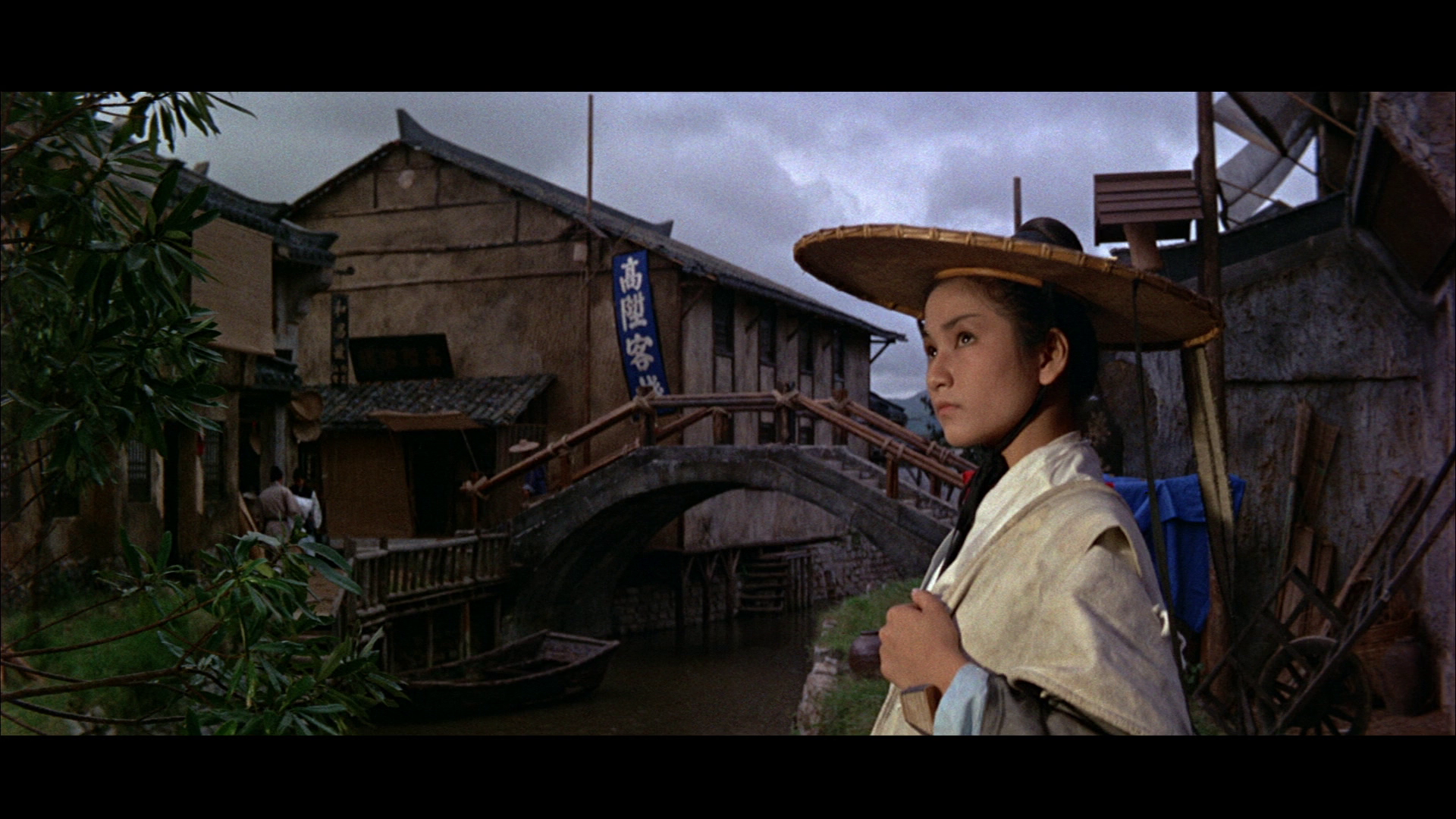 This is not a brilliant new transfer with crisp definition and startling detail. Arrow Video was at the mercy of Celestial Pictures supplying a mildly dated HD scan. The ShawScope film is presented near its original 2.35:1 aspect ratio in a curious 2.27:1 presentation. The 1080p video reflects some of the softness and distortion found in the original cinematography. An excellent AVC encode smoothly captures the texture and grain without issue.

Come Drink With Me doesn’t look quite as striking in Hi-Def as the films included in Arrow Video’s fantastic Shawscope Blu-ray box set. The elements are in worse shape with minor frame issues, including wear and a little debris. Come Drink With Me hasn’t been overly filtered but fine detail is lackluster.

The colors lean towards magenta, bringing a fairly consistent contrast with serviceable black levels. Crushing is part of the so-so grading. It’s definitely sharper than before without evidence of filtering.

This is generally a pleasing presentation with film-like properties. The camera negative likely needs a bit of restoration and remastering for further improvements.

The original Mandarin and an English dub are heard in perfectly satisfactory 1.0 DTS-HD MA. Come Drink With Me was poorly mixed for surround on DVD; those soundtracks are not included. This is not a great English dub and doesn’t contain the rich line-up of voices heard commonly on Shaw Brothers’ other kung fu classics.

It’s a slightly cramped recording with decent enough range but occasionally harsh upper frequencies. Songs are bright and rather shrill.

Arrowvideo.com has an exclusive Come Drink With Me Blu-ray edition which contains a slipcover with the original theatrical artwork. Regular versions don’t include the slipcover.

DVD owners should hold on to their Genius DVD, which has an excellent commentary by Bey Logan missing from Arrow’s special features. British Label 88 Films put out a much less impressive set of special features a couple years ago for their region B-locked release. It should be mentioned Paramount released Come Drink With Me on Blu-ray in a bare-bones Japanese edition.

First pressings include an illustrated collector’s booklet featuring new writing on the film by Anne Billson, and a 2010 essay by George Chun Han Wang about the relationship between director King Hu and producer Run Run Shaw.

The lengthy interviews are in a mix of Cantonese and English. English subtitles are provided for all Cantonese dialogue. No label has tackled this King Hu classic before with this many bonus features. Highly recommended for kung fu collectors and fans of vintage Hong Kong fare.

Come Drink With Me