Following the success of Hitchcock’s Psycho, famed British movie studio Hammer Films pushed out several thrillers in the early 1960s. Freddie Francis’ Nightmare is one such flick, a twisting Gothic tale from the period written by Jimmy Sangster filled with red herrings and maddening suspense. The b-movie’s capable cast delivers several worthy twists despite a few issues, lacking the integrity and cohesion of Hammer’s most classic psychological thriller, Paranoiac.

Jimmy Sangster loved mining Les Diaboliques (1954) for inspiration.  It’s not unfair saying his screenplay heavily copies the diabolic French thriller. Janet (Jennie Linden) witnessed her mother killing her father as a child. Now an older teenager, she suffers from recurring nightmares which threaten to send her off to an asylum like her deranged mother.

Nightmare is one such flick, a twisting Gothic tale… filled with red herrings and maddening suspense

Leaving her boarding school with a teacher in tow (Brenda Bruce), Janet returns to the home of her guardian (David Knight). There she is looked after by Grace (Moira Redmond), hired as a companion for the troubled Janet. The stately Gothic manor brings out all of Janet’s deepest fears. She starts having a difficult time separating her nightmares from reality, threatening her sanity.

Nightmare packs a punch with a couple of unexpected and well-hidden surprises. Having seen a fair amount of thrillers, few film twists surprise me anymore. Nightmare’s big twist caught me off-guard, which is high praise. An eerie sense of tension and atmosphere helps paper over its weaker aspects.

The suspenseful yarn however is hamstrung by its unusual narrative structure – the best twist also basically splits the movie into two very different stories with a drastic change to the underlying drama. David Knight is perfect as Janet’s shady guardian. However, Jennie Linden’s performance as the nominal teen lead is less than inspiring. She screeches her way through a dramatically over-the-top portrayal. The young actress keeps the film mired in b-movie cliches of the period. 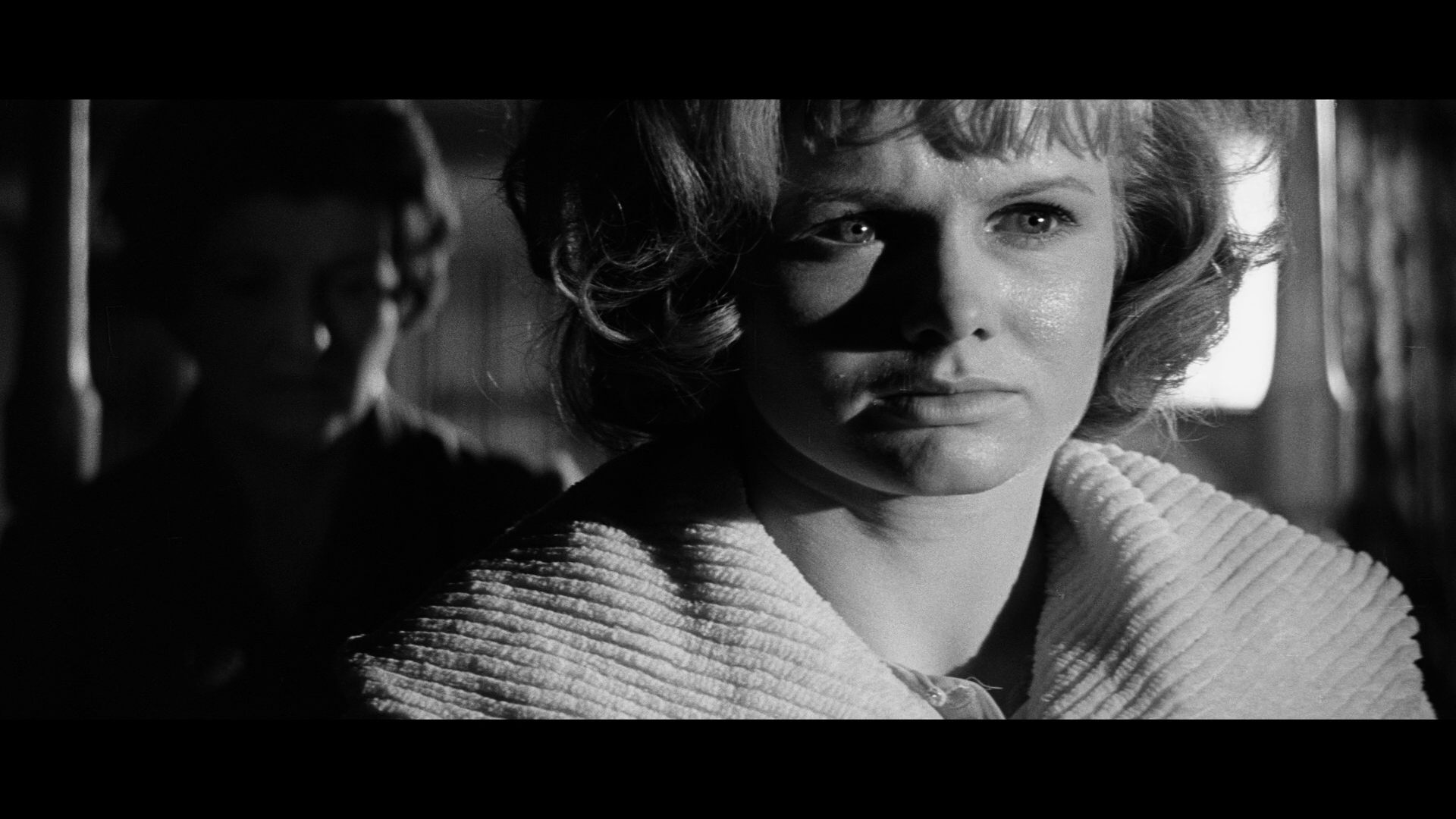 Filmed in clean monochrome scope by John Wilcox, Nightmare looks better than before in an improved new transfer. Previously released by Universal on Blu-ray, Scream Factory ups the ante with a newer 2K film scan and restoration from the best available elements, an Interpositive.

Some distortion and softness are still present thanks to the anamorphic lens employed by the filmmakers. Generally the 1080p video offers healthy definition and crisp black levels.

The main feature runs 82 minutes on a BD-50, given generous AVC parameters with no visible artifacts. Grain reproduction is film-like with decent clarity, though detailed textures can be mushy at times. Thin ringing isn’t particularly noticeable.

The elements have a few nagging issues, especially during a less-than-pristine first reel. Scratches aren’t common but make their presence felt in a few select scenes. The black-and-white 2.35:1 presentation has a stable contrast and consistent shadow delineation.

Nightmare has never been one of Hammer’s better-looking films but this crisp transfer greatly improves upon prior releases.

Composer Don Banks provides an overwrought orchestral score for Nightmare typical of the era for gothic thrillers, the most prominent feature of the monaural theatrical soundtrack. The RCA sound recording is faithfully reproduced in 2.0 DTS-HD MA. Dialogue reproduction is tight and intelligible. String instruments in the score are a bit sharp and overly harsh. Otherwise the musical score is decently robust and full for an early ‘60s b-movie.

Optional English SDH subtitles play in a yellow font, always inside the 2.35:1 presentation.

Scream Factory gives Nightmare a proper collector’s edition for the first time in North America. Universal released the film themselves as part of their Hammer Horror 8-Film Collection without special features.

UK fans have a couple of different options for Nightmare, including a region-locked edition from Powerhouse Films with differing special features. It should be noted this collector’s edition from Scream Factory has exclusive extras unavailable anywhere else.

Orders made on ShoutFactory.com include an exclusive 18” by 24” limited poster featuring their new artwork. All first pressings should include a cardboard slipcover with the new art. The disc is locked to Region A. Reversible cover art can be found inside.

A lot can be learned about Nightmare and Hammer Films from the copious featurettes and interviews. They are thoughtful critiques and fairly objective by experts steeped in the genre’s history, knowing the film inside and out. This is a nice package packed with informative analysis worth the added expense for Hammer obsessives.

Audio Commentary With Film Historian Bruce Hallenbeck – A methodical but rather dry solo discussion about the film and behind-the-scenes production issues.

Sleepless Nights (16:14 in HD) – A widely engaging and enjoyable look at Nightmare from genre expert Kim Newman, a well-known British figure who has worked for many years with specialty labels like Arrow Video.

Slice And Fright (16:12 in HD) – Author/Film historian Jonathan Rigby breaks down Nightmare within its greater Hammer context in a new featurette.

Jennie Linden Memories (14:16 in HD) – A full interview with actress Jennie Linden about her film career and her role in Nightmare.

Full disclosure: This Blu-ray was provided by the label for review. This has not affected the editorial process. For information on how we handle review material, please visit our about us page to learn more.