Superman in the 1990s experienced a huge surge in interest due to ABC’s Lois & Clark on television and his death in the comics, becoming a national news event for the industry. The Last Son of Krypton also got hitched in the 1990s, finally putting a ring on Lois Lane’s finger after several decades of dating.

On the heels of their wildly successful Batman: The Animated Series, producers Bruce Timm and Paul Dini gave us 54 consistently well-done episodes of Superman: The Animated Series. A high watermark for the character’s animated adventures, rarely has Superman been treated with such tasteful respect. It’s no secret by this time Superman had begun losing the luster that once made him the world’s most famous and popular superhero, passing that mantle to heroes like Batman and Spider-Man.

… a pure, simplified take on Superman and his supporting cast, told in a perfectly streamlined manner

The real turning point was the late 1980s as Michael Keaton’s Batman became a massive blockbuster and Christopher Reeve hung up his suit for good in the woeful Superman IV: The Quest For Peace. The iconic superheroes switched places in stature and fans haven’t looked back. It could be years before we see another solo theatrical movie starring Superman, a real shame considering the explosion in comic book movies.

Much different in tone and feel than their animated Batman, the Man of Steel flies high above a gleaming Metropolis with smart tweaks on familiar friends like Jimmy Olsen. Timm and Dini updates foes like Lex Luthor and Metallo, incorporating changes using past and more contemporary attributes grabbed from several different mediums. The show treats each character with respect to their roots. It’s a pure, simplified take on Superman and his supporting cast, told in a perfectly streamlined manner capturing each character’s unique charm.

Superman: The Animated Series pulls bits and pieces from the classic Fleischer Superman cartoons, the ‘50s Adventures of Superman with actor George Reeves, the aforementioned Lois & Clark, a healthy range of comic books from history including the ‘80s reboot, and more sources.

There is a conscious attempt avoiding Christopher Reeve’s Superman as an influence, which works exceedingly well most of the time. The biggest difference are Clark’s parents who remain alive. Ma and Pa Kent play a recurring role in Superman: The Animated Series. Clark frequently visits his parents’ home back in Smallville for chats.

Funnily enough, the show was somewhat unappreciated by fans in its day. It’s only in retrospect that Superman: The Animated Series has grown in stature and prestige. Now many consider it the epitome of a relatable approach to a modern Superman. The storytelling maintains the love triangle between Clark Kent, Lois Lane and Superman in a throwback to the character’s past. A string of unsuccessful Superman projects over the past two decades in both comics and film constantly reminds fans this animated series may have been the best Superman within a modern setting.

Tim Daly provides the voice for Clark Kent/Superman, Dana Delany as a hard-charging Lois Lane, and Clancy Brown delivers a marvelous Lex Luthor. Clancy Brown’s commanding presence as Luthor, playing the updated business tycoon version of the supervillain from John Byrne’s reboot, is a perfect foil for Supes. Many thought Dana Delany would have been a wonderful choice for a live-action Lois Lane and she doesn’t disappoint. Her banter with both Clark and Superman is one of the show’s defining features. The savvy Daily Planet reporter affectionately uses “Smallville” as a nickname for Clark.

The Superman saga has been evolving for over eighty years across a variety of mediums. Superman’s crest is a symbol recognized all over the world. For many years he was the most famous comic book superhero in existence. Superman: The Animated Series may not have reached the heady highs of Batman: The Animated Series but it’s far more consistent, a true classic. Timeless storytelling and judicious tweaks to Superman’s supporting cast make it truly essential. 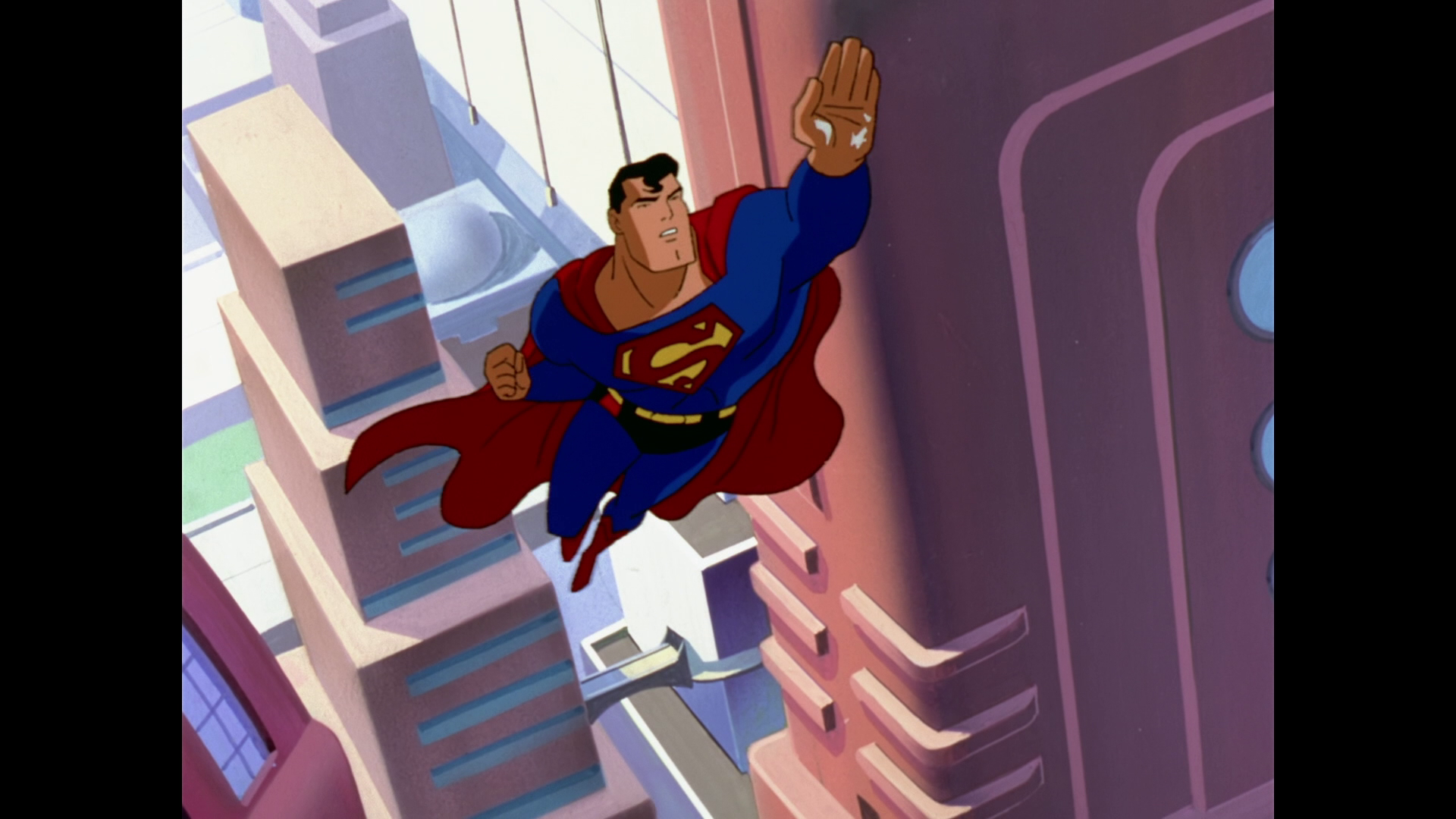 Superman: The Animated Series looks better than it ever has before with a fantastic remastering effort by WB. Less filtered and from better quality elements than their earlier work on Batman: The Animated Series, it’s a decidedly improved 1.33:1 presentation. Crisp video quality highlights the animation’s pleasing color saturation and iconic character designs. Inky black levels and a perfect contrast give its cel animation a freshly nostalgic look impossible with today’s digitally-colored productions.

A touch of filtering is applied very lightly, leaving a little visible dust and debris intact. As a videophile concerned about vintage animation, it’s a great job which reveals the show’s inherent visual appeal.

WB discusses the restoration job for Superman: The Animated Series in some detail below.

“All 54 episodes have been remastered from the original 35mm interpositive sources, giving special attention to extensive color correction, dirt and scratch clean-up, and adding a grain reduction pass to create a pristine picture, all while making sure not to affect the original lines in the artwork of the animation.”

Warner says “the audio was retransferred from the original audio masters” for this Blu-ray set. The clean-sounding 2.0 DTS-HD MA audio soars for the rousing score and delivers crisp sonics. It’s a strong stereo mix with nice balance, intelligible dialogue and extended dynamics.

WB bypasses a fancy limited edition for Superman: The Animated Series. The standard general release is a six-disc set with all 54 episodes, arriving in a slightly larger Blu-ray case with a cardboard slipcover. A VUDU digital copy is included. You get all 54 episodes on the digital video provider in HDX quality. A two-page booklet inside lists the episodes.

Superman: Timeless Icon (32:45 in HD) – An all-new feature exclusive to this remastered Blu-ray release of Superman: The Animated Series. It reveals the show’s history and those who created the new mythology for The Man of Steel, as told by producers Bruce Timm and Paul Dini, director Dan Riba, writer Bob Goodman, casting/dialogue director Andrea Romano, and Tim Daly & Clancy Brown.

A Little Piece of Trivia (21:29 in SD) – So you think you know your Superman trivia? Wait until you hear about the series’ connection to Telly Savalas!

Superman: Learning to Fly (09:41 in SD) – Get into the minds of the creative team as they detail the birth of this animated Superman and his world. Featured speakers include producers Paul Dini, Bruce Timm and Alan Burnett, art director/producer Glen Murakami and directors Dan Riba and James Tucker.

Building the Mythology: Superman’s Supporting Cast (09:37 in SD) – The characters around Superman get the spotlight in this in-depth look at everyone from Lois Lane, Jimmy Olsen and Perry White to Maggie Sawyer, Lana Lang, and Ma & Pa Kent. Producers Paul Dini, Bruce Timm and Alan Burnett, art director/producer Glen Murakami and directors Dan Riba and James Tucker give viewers the inside scoop.

Menaces of Metropolis: Behind the Villains of Superman (13:02 in SD) – A rogues’ gallery of top-grade baddies, including traditional opponents Lex Luthor, Brainiac, Bizarro, Metallo, Mr. Mxyzptlk, Toyman and Parasite, as well as new villains created for the series – like Live Wire and Luminus. Producers Bruce Timm, Alan Burnett and Paul Dini, directors James Tucker and Dan Riba and casting/dialogue director Andrea Romano give us a tour of the villains.

The Despot Darkseid: A Villain Worthy of Superman (16:57 in SD) – Darkseid takes center stage in this examination of one of The Man of Steel’s most vicious adversaries, plus other Fourth World characters. The featurette includes producers Paul Dini, Bruce Timm and Alan Burnett, art director/producer Glen Murakami, writers Rich Fogel and Stan Berkowitz, director James Tucker and Charles Hatfield.

Full disclosure: This Blu-ray was provided for review by the label. This has not affected DoBlu’s editorial process. For information on how we handle all review material, please visit our about us page.

Superman’s quest for truth, justice, and the American Way flies high in this pitch-perfect animated series from the same creative team behind Batman: The Animated Series.