“I believe in America,” are the first words spoken in The Godfather. Many during the post-war 1940s did too, riding a victory high and soon sitting down to watch quaint middle class America’s perfect domesticity through the eyes of say, a Donna Reed.

Set in the ‘40s but made in the 1970s, The Godfather eschews idealism, patriotism, and peace. It’s brutal and fatalist, showing that even an awarded soldier can fall to the worst instincts of success. That’s The Godfather’s allure, dynamically shredding sitcom life for racism, cruelty, and heartlessness. It dares suggest the greatest generation, while reaping the benefits of reconstruction, could so easily fall into violence, or worse, enjoy it.

The Godfather begins with a celebration – a wedding – flushed with joy. Around Michael Corleone (Al Pacino), people cheer. They thank Michael for his service in battle, shout about his heroics, yet he’s notably reserved. This a vicious man; he’s killed, and was trained to do so. Michael’s insertion into the Corleone crime family is an unwilling inevitability, and it wasn’t only the promises that come from swindling people in casinos or protection rackets, rather the chance to continue being who – or what – he was told to be.

War changed a generation. Vito Corleone (Marlon Brando) approached the business through thoughtful considerations, always seeking to defuse rather than inflame. A brutal man, but never without thinking of possible repercussions. His son, after defeating Germany and Japan, sees himself as invincible. Vito resisted business changes that included illicit drugs; Michael finds the potential profits intoxicating, and anyone holding him from his new American ideal an enemy.

There’s invaluable nuance and space to The Godfather, allowing Michael’s rise to organically appear over time. The old guard is decimated, either offed in a mob war, pushed aside by power politics, or dying from age. None in the new blood appear rational, like Sonny (James Caan) who needs held back when emotions flare. Corruption moved from invisible dirty money bribing politicians, industry, and police to executions in public. The privacy was lost. Michael puts multiple shots into his rival’s heads midday in a restaurant, patrons fleeing.

The Corleone family isn’t in danger of losing their ill-gotten wealth as Michael takes over. Rather, they don’t pull in what they used to. It’s about numbers – the whole country is. “I believe in America” isn’t effusive praise, but a belief that anyone can make the nation work for themselves, no matter who they take down to get there. In that respect, Godfather is immeasurably haunting. 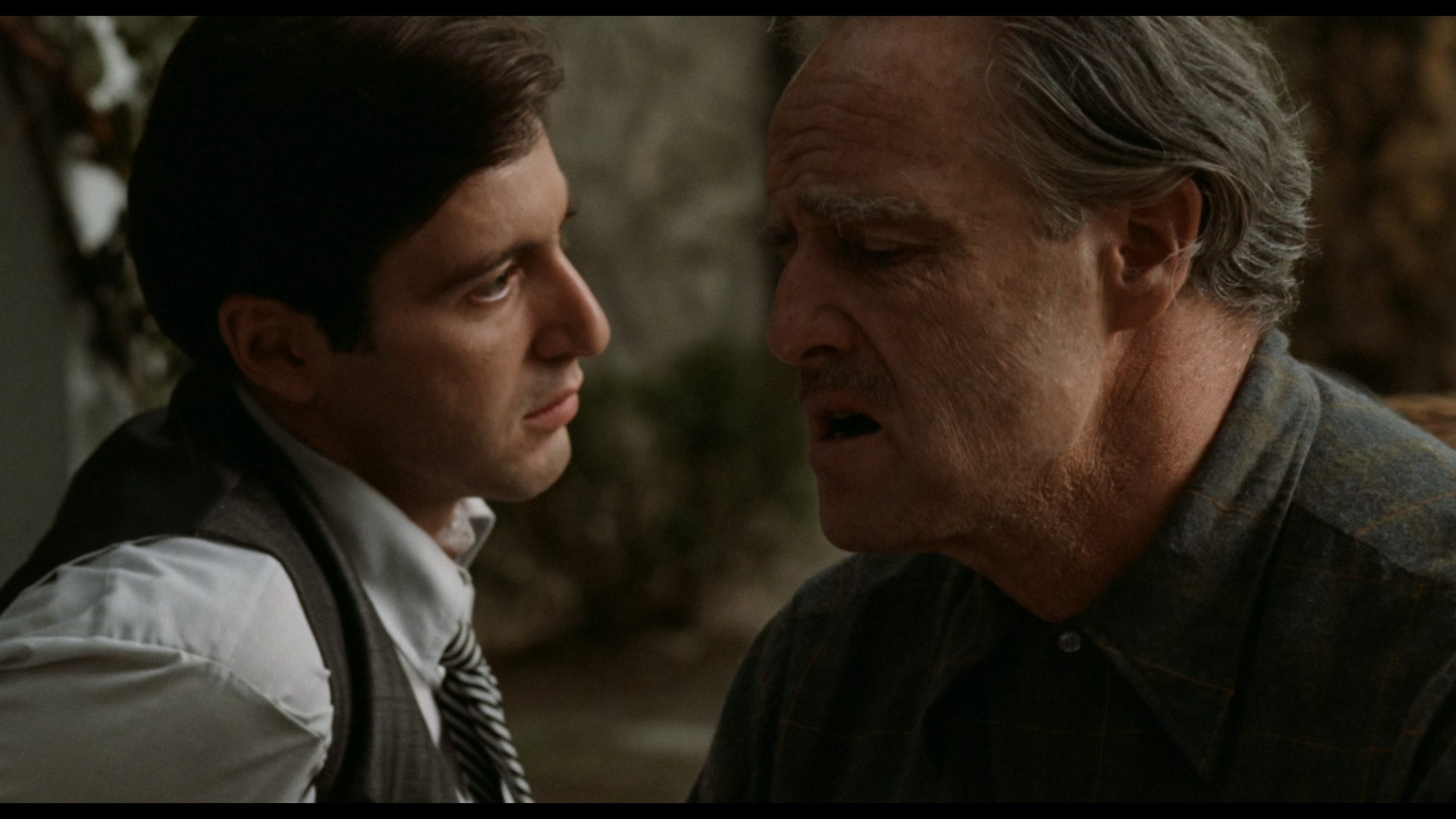 Paramount restores The Godfather again for this 4K release with generally impressive results. Unquestionably, there’s more detail flourishing in the image compared to the Blu-ray. Texture in close looks sensational, pure, and resolved. Wide shots pop, the added resolution bringing stellar sharpness into the frame. Picking up individual stitches on clothing, whether suits or dresses, is possible during the opening wedding and beyond.

Grain varies in thickness, typical for The Godfather. Paramount’s encode performs beautifully, although the mastering isn’t without concern. Look at Kay’s face around the 13-minute mark and it’s evident frozen grain follows her as she speaks (and for the rest of the scene). This happens infrequently throughout (Brando about 2:07:00), that sign of errant processing an unfortunate misfire in an otherwise pristine, natural presentation.

An intense Dolby Vision pass is surprising in intensity. Impeccable brightness coats any outdoor sequence, clipping slightly, if naturally given the sunlight. Most catalog disc remain careful with regards to HDR, but not The Godfather. The same goes for the shadows, bringing out far greater definition than before, avoiding most crush to give scenes greater depth. Color grading keeps the warmth, bronzing flesh tones without a subtle hand. This sepia push gives the film a vintage veneer, preserved here alongside zesty primaries (where possible).

Restored mono stays, sadly, compressed in Dolby Digital. The uncompressed track comes in TrueHD 5.1, a thankfully careful offering that only divests from the center where needed. Birds chirp in the rears to maintain ambiance. The score widens and stretches to flush the soundstage full. When a car explodes, pieces fall through the soundfield as the blast reverbs through the air. Smooth low-end bass strums through the subwoofer to provide mild range.

Exquisite fidelity renders dialog flawlessly, indicating no aging on the source. Flutes and horns exhibit no distortion, even at their highest levels.

The only thing on the UHD itself is a new intro from Francis Ford Coppola and his commentary. Additional bonuses reside on a separate disc inside this trilogy box set.