Both fears of the space race AND radiation fuel the menace of Monster from Green Hell, a surefire catch-all for late ‘50s era audiences not yet exhausted by gargantuan insect flicks. For reasons known only to movie logic, the scientists who open this lumbering dud shoot animals into space – including wasps, because that’s what cinema science does.

Solely because producers had access to African stock footage from the 1930s, Africa is where the wasp rocket crashes, unleashing a handful of man-munching bugs in the process. Cheapness ensues, keeping the critters off-screen for much of the runtime as olden film stocks run across the screen. A droning buzz indicates the presence of the creatures, if not enough to stave off boredom.

Easy as it is to trash Monster from Green Hell, there’s credit due for the kitschy bug design, utterly implausible and barely qualifying as a wasp. However, some stop motion animation brings them life, more so than a static, full size prop head can.

Killing time, Monster from Green Hell fills with dead air, and as expected, lifting footage from nearly 20 years prior doesn’t do much for the depiction of African natives. It’s every racial cliché padded into this glacially paced non-thriller, and while borderline for 1957, in 2022, well, it’s notably worse.

The goal isn’t to make people fearful of space-born radioactivity; that’s just a catalyst, mimicking more successful genre flicks. Chances are no one walked away from the theater shaking over the possibility a super bug would drop the sky and eat them either. Instead, the fear comes from an unknown land where lions roam, the water is poisoned, and merciless tribes lie in wait to murder the heroes. After all, that’s the majority of Monster from Green Hell, not the title creatures. Unfortunately, those scares don’t work either. 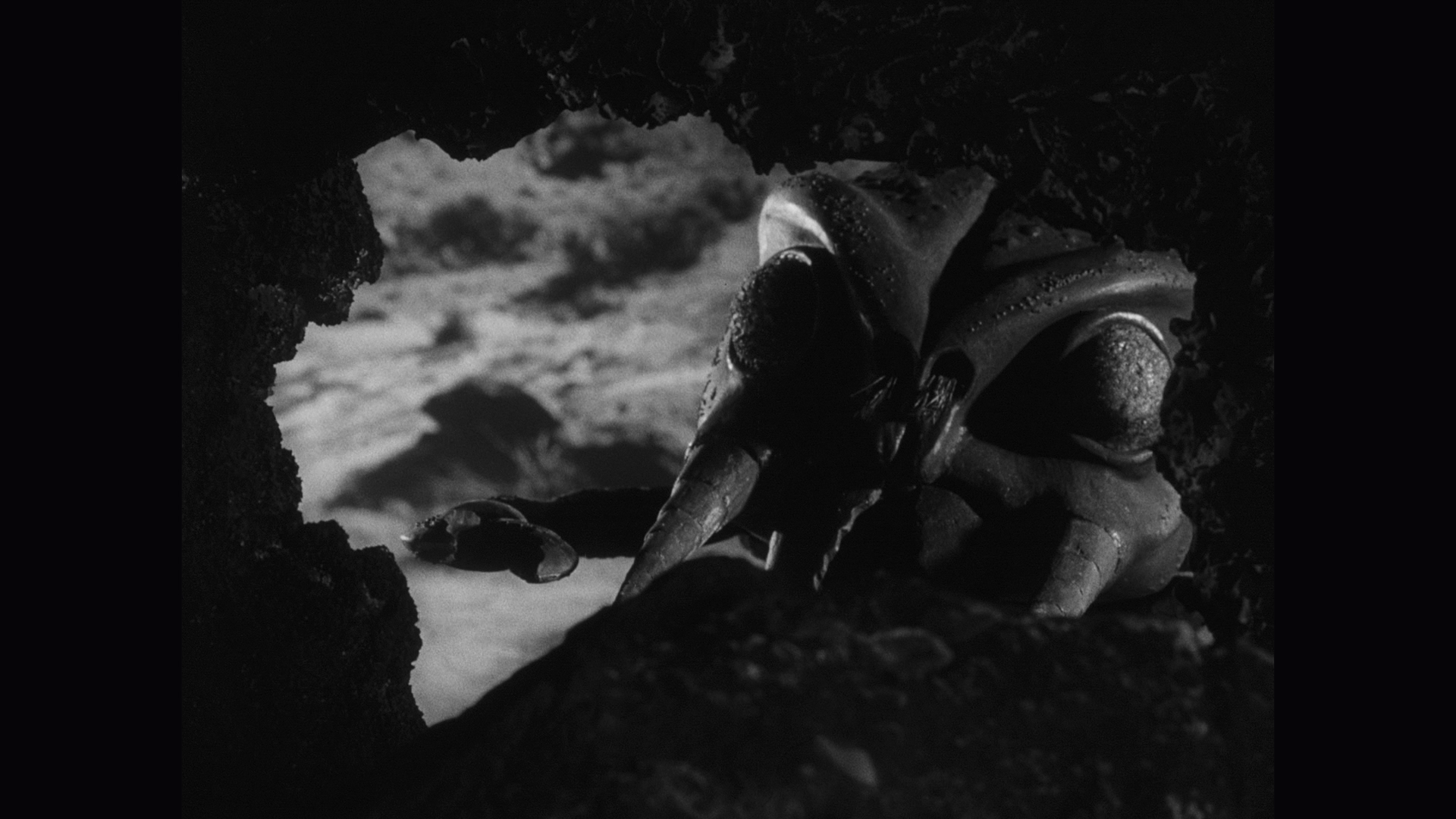 Springing for a fresh master for this giant bug lark, Film Detective adds some gloss to Monster from Green Hell, giving this cheapie exquisite sharpness in HD. There’s more detail evident now than likely ever before. Facial texture and closed set jungles make full use of the resolution. Definition behind a minor, slightly rough grain structure remains consistent and pure. Encoding wobbles a touch in heavier grain, revealing artifacts. Borderline, but serviceable.

Gray scale is a bit pinched. Clipping in the contrast and lacking shadows keep Monster from Green Hell a little lean. However, there’s depth and dimension in the source material, leaving aside the weaker stock footage.

The print itself shows notable vertical scratches. It’s infrequent, but damage, when it appears, tends to present with high severity. Remastered, but not necessarily restored. The actual impact to the final results is rather menial though.

Note the last few minutes are in limited color, mostly red. It’s unimpressive as it was merely a gimmick. Also, the disc offers both a widescreen and academy ratio presentations. Both use the same print it seems, but the latter is slightly (very slightly) clearer.

Performing better than the video, this excellent DTS-HD track sounds superb for something this vintage. Dialog comes through clearly, without distortion. It’s firm.

Depth comes from the score, drums reverberating into the subwoofer, unusually so. The buzz from the bugs carries plenty of treble, also pure. Static runs under certain scenes plus the odd pop in spots suggest the age more than the rest.

Author Stephen R. Bissette drops by for a commentary track, while historian C. Courtney Joyner assists with his retrospective on Jim Davis’ career.