William James (Jeremy Renner) returns home after nearly 40 days in Iraq. After spending time with his girlfriend and child, he head back into the war, this time for a full year. The Hurt Locker suggests this is patriotism. In a way, it is – James hears of kids vaporized by a suicide bomber, and as a disposal expert, diffusing (literally) those attacks is his job.

There is another side to James’ decision. Military life trained him to seek thrills, to ignore his own safety, and enjoy only adrenaline. Much is made in Hurt Locker about the mental toll conflict takes on soldiers, typically on the American side only. Iraqi pedestrians serve more as decoration around the bomb sites; their existence is treated as annoyance, the hurt they experience as civilians irrelevant. While standard in American war cinema, Hurt Locker’s “day in the life” perspective feeds into the idea of James losing humanity. Even his own squad keeps their distance. All that matters is the rush and the job.

Suitably tense, the final act forces James to confront reality. A kid becomes a body bomb. An innocent man is stuck inside a bomb cage, pleading for help. Arriving at a building post-blast, the screaming and crying families distract. Yet all of this isn’t enough. Guns drawn or bomb suit zipped, James buries those emotions.

Hurt Locker divests itself from the politics of why James and his company are in Iraq. This is a filtered point-of-view, and in one of the final speeches, Sanborn (Anthony Mackie) states if he dies, no one cares. Not the politicians, not the public. James accepted that fate. It’s not clear why he (or anyone) took this job, only that he does it well. In order to do so, the demand is to separate one’s self from fear, and as such, all feeling.

There’s inherent stress when watching Hurt Locker. The script sets out to detail this one central element to the extensive Iraq war. In that, Hurt Locker succeeds, demanding of attention, and relentless in stacking odds. It’s difficult not to notice greater context though, as if deliberate, and no doubt a means to maintain military support on the production. Hurt Locker grazes the idea of how signing up detaches soldiers from a middle class lifestyle. The passion for romance is gone. Only the bombs matter now. 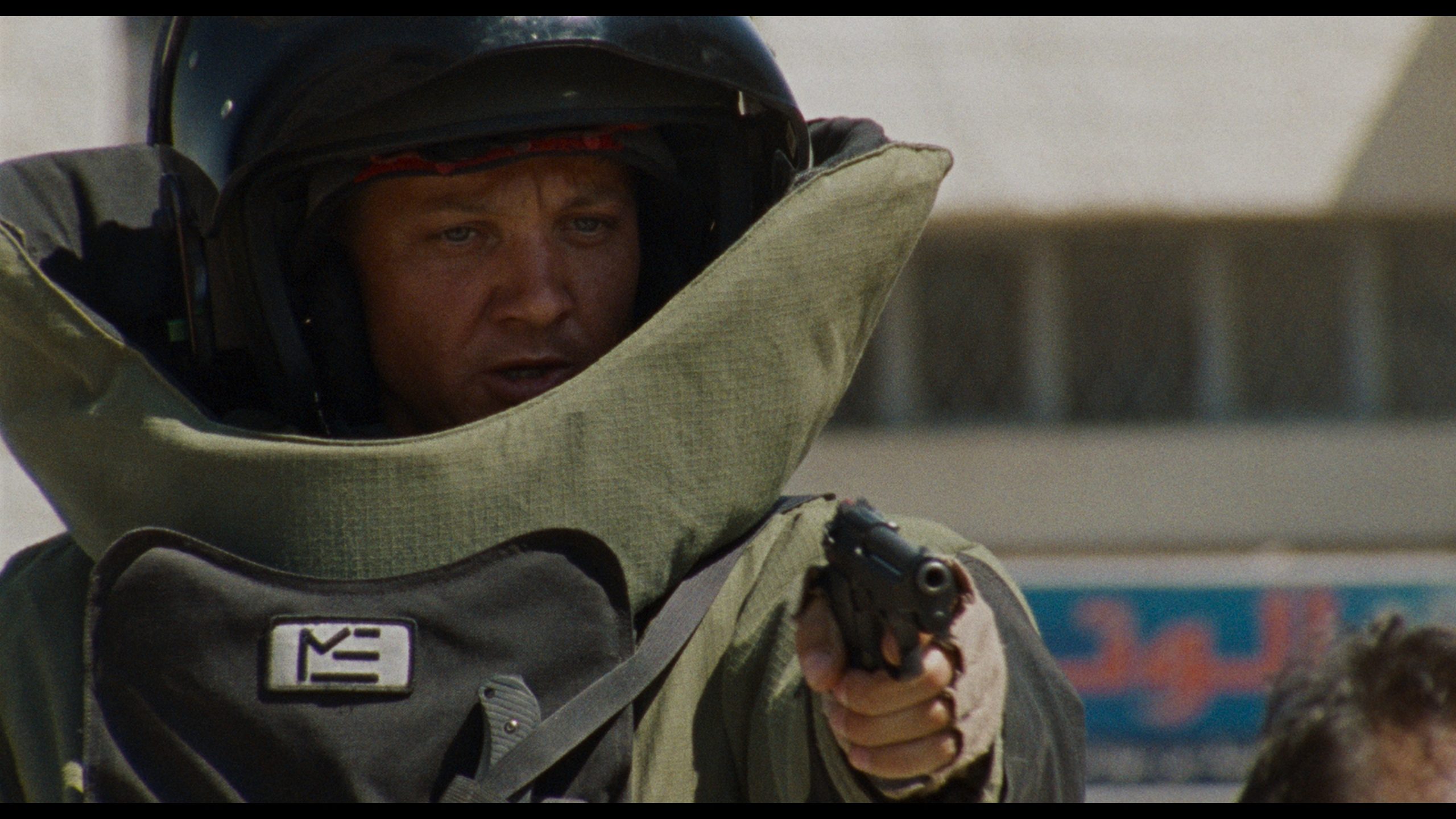 Select slow-motion shots were captured on early digital video. There’s clear weakening of resolution and clarity in those moments. Some aliasing, fringing, and color breakup appear, unavoidable as those issues are. The rest is splendidly textured, resolving facial definition in close, at least as the cinematography allows. Hurt Locker employs frequent alternating focus.

Broadening the already stellar mixing, the new Atmos track lifts Hurt Locker vertically as jets and helicopters sweep through the soundstage. Bullets echo off buildings in deserted streets, or pass by rapidly, smoothly, and precisely. Stellar accuracy keeps the characters surrounded by ambiance, making moments of silence additionally tense as any sound will startle.

Separated from the politics of the war itself, Hurt Locker follows a “day in the life” and mental toll of American soldiers determined to do a job,