Made in the wake of ABC’s popular Bewitched program, producer Sidney Sheldon created I Dream of Jeannie for NBC in 1965. Inspired by The Brass Bottle, actress Barbara Eden was cast as the sexy genie for the show and the rest is history.

The outlandish sitcom aired for five seasons before living decades in syndication, only growing in popularity and becoming a permanent pop culture fixture. Formulaic like most comedies of the 1960s, Eden’s irresistible appeal as Jeannie made her one of television’s most popular characters.

The show hit its stride after making the transition to color in season two and never looked back. A comfortable formula developed between Jeannie and her master with recurring gags used as fodder. Ultimately 139 half-hour episodes were made about the mischievous but goodhearted genie’s campy, comic adventures.

NASA astronaut Tony Nelson (Larry Hagman) crashes on a desert island, unknowingly releasing a beautiful genie (Barbara Eden) trapped in her bottle. Tony becomes Jeannie’s master and she follows him everywhere, living only for his needs. A love triangle is quickly discarded in the show’s run and soon its primary dynamic focuses entirely on the relationship between Tony and Jeannie. Jeannie hopes for marriage, which only happens much later in the series.

Recurring characters include Tony’s best friend Roger Healey (Bill Daily) and a Dr. Bellows (Hayden Rorke). A litany of guest stars make appearances such as Milton Berle. Most of the humor stems from no one knowing about Jeannie’s powers except Roger. Jeannie gets Tony into messes at work using her powers, almost always resolved by the end of each episode. Roger often serves as comic relief in the b plot.

The laugh-track sitcom delivers mirth and mayhem in equal doses, always held together by Barbara Eden’s effervescent performance. It’s hard imagining anyone else bringing such charm and delight together with a wink of sexiness in the mix. Hagman plays Tony as straight as possible, the exasperated master who has to endure the consequences of Jeannie’s often wacky antics. His work at NASA plays an important role in the show and prevents it from becoming silly fantasy all the time.

I Dream of Jeannie is mostly remembered for Barbara Eden but the laughs hold up decades later, one of the funniest television comedies from the 1960s. 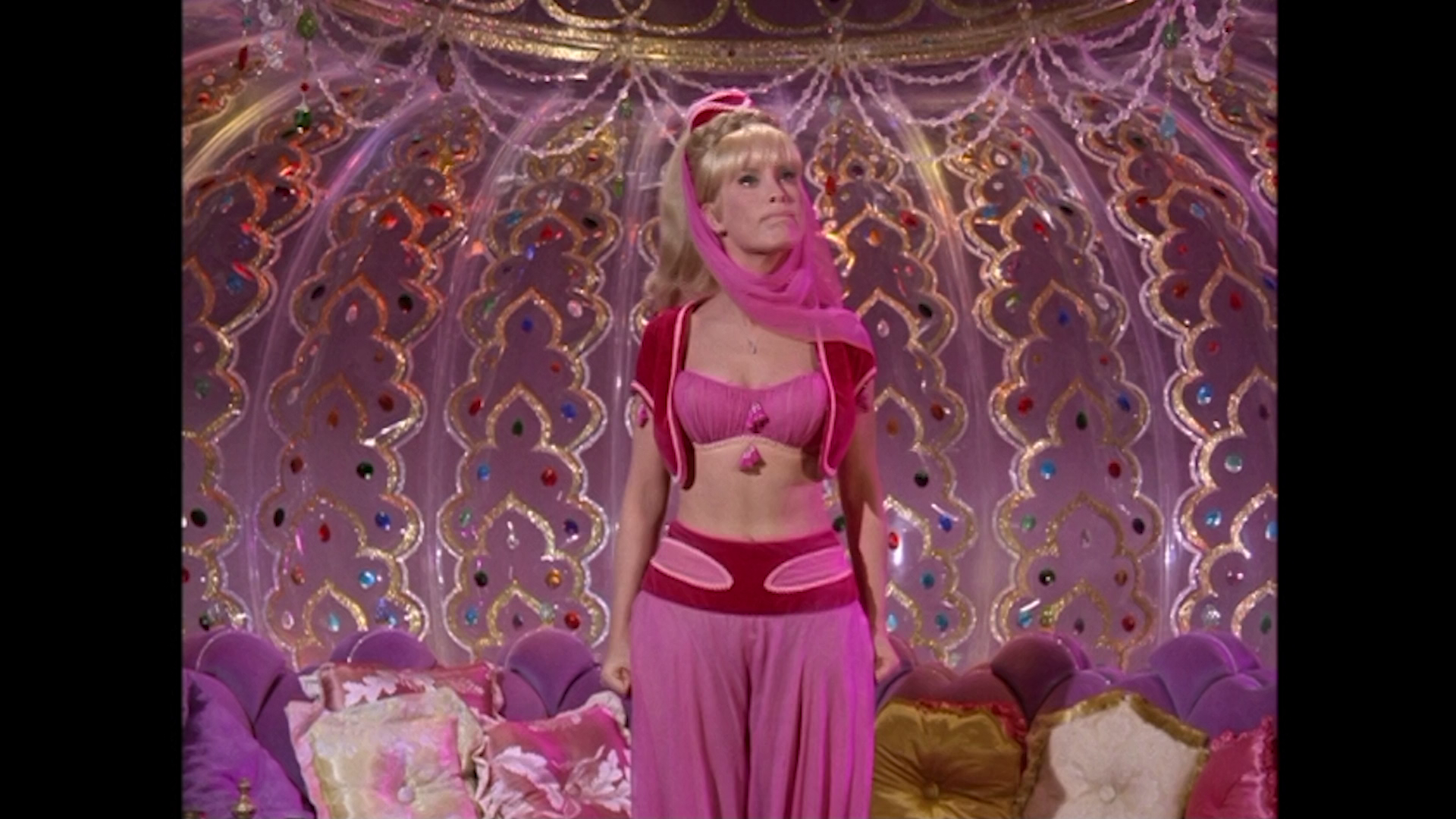 Save your money, folks. This is one of the most disappointing Blu-ray debuts in the last decade. Mill Creek isn’t known as a bastion of top-flight transfers and dedication to video quality, but they’ve let I Dream of Jeannie’s fans down big time with this mediocre release. As a fan myself of the show, it’s a great and bitter disappointment. There are virtually no benefits from the picture quality here beyond the DVD sets which were pumped out 15 years ago. If anything, the video might be a step backward if your player is great at upscaling DVD content.

Licensed from Sony, Mill Creek provides all five seasons in an interlaced 1080i presentation which screams a dated HDTV syndication master struck back in the mid-2000s. It’s very difficult assessing if this is in fact sourced from anything but standard-definition DVD sources. The transfer is either badly sub-par or a leftover from the mid-2000s.

The show’s bright, crisp television cinematography, all shot on film under perfect studio conditions, should shine in HD with brilliant Pathe color and excellent resolution. Adam West’s Batman, a contemporary production from the same era with a similar aesthetic as I Dream of Jeannie, looks wonderful on Blu-ray because the studio went back to the film elements and lovingly mastered it. Mill Creek’s transfer resembles a hastily-made master made for syndication at the dawn of the HD era.

As a Blu-ray, the 1.33:1 video is riddled with aliasing, cross-hatching, moiré patterns, and other artifact nasties. The elements look in fairly stable condition with a solid contrast, steady black levels, and nice clarity. Grain reproduction is spotty, hampered by the AVC encode.

I Dream of Jeannie’s monaural soundtrack is heard in adequate-sounding 2.0 DTS-HD MA. The catchy theme song from Hugo Montenegro offers fairly robust fidelity and thankfully sounds decent. There is a laugh track, often at odds with the intelligible dialogue.

Hints of strain and harshness pop up now and then in the otherwise decent recording. The sound design is limited, constrained by the show’s disposable sitcom format.

There is an audio issue with an episode from season five, “Help, Help A Shark”. Mill Creek has acknowledged the problem but hasn’t discussed a possible fix as of this review’s publication date.

Sony’s original complete series DVD set came with two notable special features entirely absent from this BD set by Mill Creek. A featurette titled “Out of the Bottle: I Dream of Jeannie” offered interviews with producer Sidney Sheldon and the show’s three primary stars. There was also an audio commentary by Barbara Eden, Larry Hagman, and Bill Daily on the pilot episode.

Mill Creek’s set has one bonus feature outside of the beloved show’s 139 episodes – the serviceable 1985 reunion movie made for television which brought Barbara Eden and Bill Daily back, but replaced Hagman with Wayne Rogers as Major Nelson. Despite being listed on disc #1, the movie can be found on disc #2. There’s a second television movie with Barbara Eden from 1991 which isn’t included.

The 12-disc set comes in two separate Amaray cases, packed inside a slipcase. Certainly less elaborate, and less troublesome, than Sony’s ornate cardboard contraption for DVD which was shaped resembling Jeannie’s bottle. The packaging indicates Region A but there are good reasons to believe the discs are actually region-free.

I Dream of Jeannie…Fifteen Years Later (94:13 in 1080i; 2.0 DTS-HD MA) – It’s a shame they couldn’t bring Larry Hagman back for this 1985 reunion movie, but he had become a huge television star on Dallas in the ‘80s and likely didn’t need the money like his less successful co-stars. Wayne Rogers replaces Hagman in the role. Jeannie and Tony now have a son. The couple are looking forward to retirement when Tony takes one last mission and Jeannie’s mischievous sister shows up, causing havoc. Picture quality indicates another early, dated transfer struck for HDTV back in the 2000s. Decent clarity but underwhelming sharpness and definition.

I Dream of Jeannie

The classic sitcom from the 1960s starring Barbara Eden is funny as it ever was but receives a putrid video transfer from Mill Creek.