Shaw Brothers’ martial arts films frequently involve rebellion as the cornerstone of their stories, although Shaolin Mantis is unusually charming about it – initially, anyway. Shaolin Mantis deals first in romance, forbidden romance, of course, staged against a fairy tale-esque, strict father whose seeks to overthrow the king.

That daughter (Cecilia Wong) falls for the outsider Wei Fung (David Chiang), the latter needing to strike down her father’s planned rebellion. It’s a clever setup, and Wong’s playfully childish demeanor allows the first act a satisfying brevity. She’s a brat, disinterested in studying, and that unruly streak against authority is a shared trait, perfectly in sync with Shaolin Mantis’ theme.

Shaolin Mantis drifts from comic puppy love to tragedy, then to even further tragedy

Key to this tale is a lack of sensible, reasonable leadership. Wei Fung’s king rules with a domineering, unfair hand. Wong’s father seeks to sustain illogical traditions, even as the new generation wants to reduce the ludicrously strict controls. The kung-fu genre loves a fight, but often, imbues these fights with caution. Each brawl is preceded by unavoidable circumstance – these skills can murder people, no matter their absurdity. Restraint is central to the art.

Always hunting for styles, Shaw Brothers’ Shaolin Mantis’ training montage before the final act sees Wei Fung encountering a praying mantis, mimicking its gestures to develop techniques in an appropriately asinine sequence. Illogical or not, the determination found in Wei Fung’s face as he learns new grips and strikes feels proper given what he’s endured.

Shaolin Mantis’ twist ending nears legendary status, divisive in the fandom, but compelling given how serious its plays. Shaolin Mantis drifts from comic puppy love to tragedy, then to even further tragedy that’s wholly in-step with the narrative progression. Revolution comes with cost, often in lives, and while Shaolin Mantis’ cruel closing minutes seem wasteful, they don’t happen sans an inspired streak of defiance. Wei Fung’s story can only end one way. 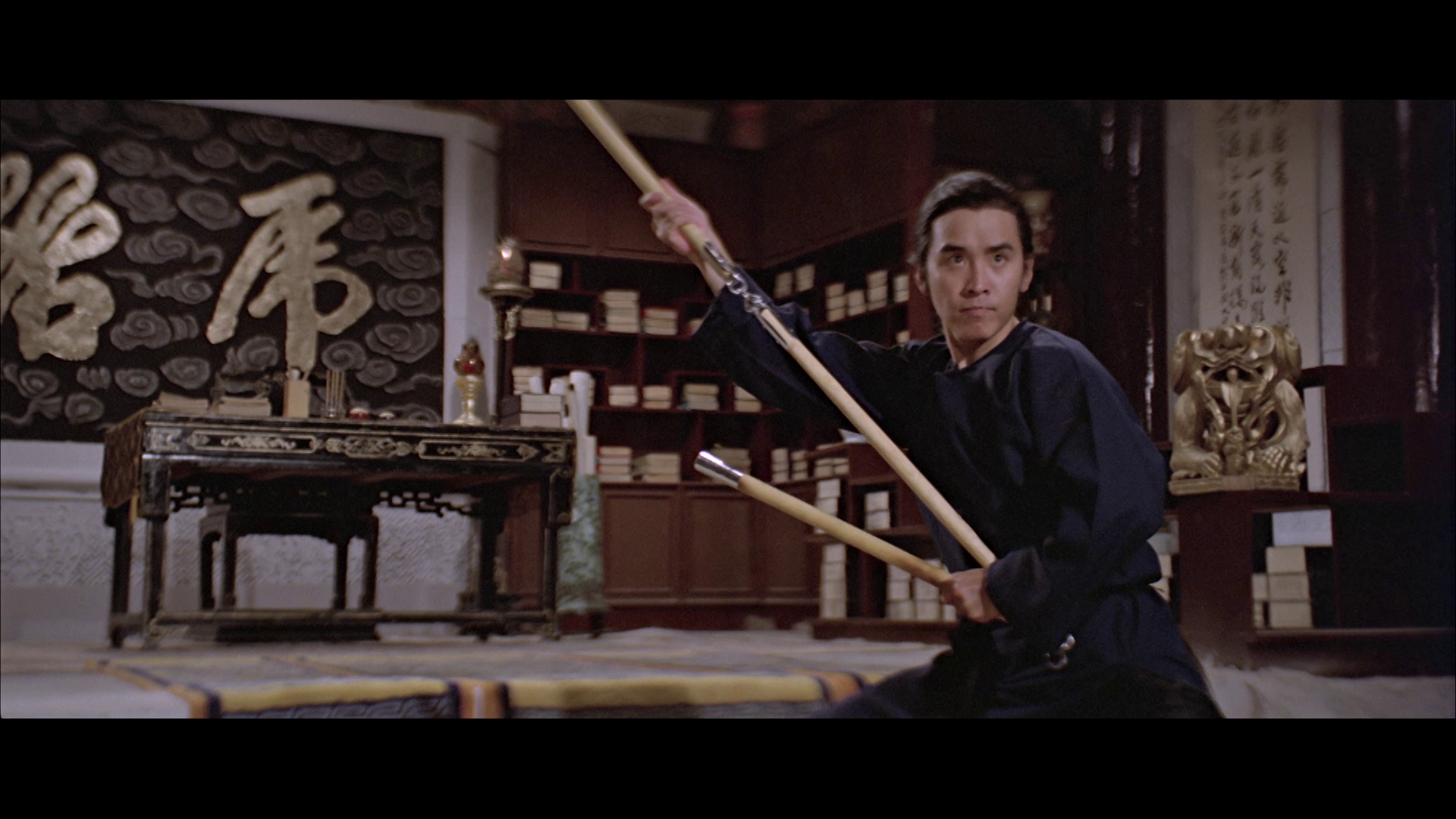 88 Films debuts Shaolin Mantis on Blu-ray via a new master (according to the marketing), but it’s not a great one. At issue, the resolution, sub-par enough to suffer notable aliasing/jaggedness on most edges. This is most prominent at distance. For instance, the king’s throne in the opening scenes breaks up the various decor around him, leaving messy definition behind.

This is coupled with only average clarity. Grain is minimized to almost nothing. While texture does appear, Shaolin Master looks overly oily/waxy. Smearing happens too, especially in close-ups. Additionally, compression brings artifacting, primarily seen on solid-colored walls like gray concrete. What results is a transfer lacking in filmic qualities, and far too digital.

A touch flat, color doesn’t thrive, although certain hues on costumes succeed. Pinks, turquoise, and reds stick out. Flesh tones hold a warmth as well. Contrast is decent, and shadows dim. At least the restoration goes well, removing debris and scratches in full.

Upper registers in the score wane and wobble, not unexpectedly. The low-end holds itself together better; drums actually produce a small rumble from this mono track.

Both an English dub and Mandarin are available, each in PCM. Age deteriorates dialog on both, scratchy and worn, if perfectly intelligible.

Mike Leder is all over these 88 Films Shaw Brothers discs, appearing here again for a commentary, joined by Arne Venema. There’s a second commentary as well from another Asian cinema expert, Frank Djeng. David West then provides a visual essay on the film, followed by an interview with actor John Cheung.

It’s worth noting the physical bonuses too, which include a poster and photo cards, in addition to a solid slipcover.

A clever, enjoyable kung-fu romance is at the heart of Shaolin Mantis, and comes well prepared for the tragic fighting to come during a lengthy final chapter.