DC super-villain Catwoman receives her own solo movie in Catwoman: Hunted. The animated adventure is another joint production between the West and Japan like Batman: Ninja. Young Justice scribe Greg Weisman and director Shinsuke Terasawa (Gintama) team up for a Catwoman flick heavily influenced by anime tropes.

The action-packed thriller turns Batman’s sometimes paramour into an international woman of mystery, battling the shadowy criminal network Leviathan led by Lady Barbara Minerva. The globe-trotting adventure sees Catwoman facing off against a deep roster of DC villains and criminals, including Black Mask, Solomon Grundy, Tobias Whale, Cheshire and others. Catwoman: Hunted even borrows a foe from Wonder Woman, the Cheetah.

After she’s caught by Interpol, Catwoman is forced to team up with Batwoman against her will. There’s an uneasy sexual tension between the two women which plays into their banter. The contrast in their personalities helps drive the film’s dynamic.

A taut screenplay feels like the trial run for a potential live-action solo movie. Batman doesn’t make an appearance, though a few lines indicate Selina’s thoughts about him. Catwoman: Hunted turns its anti-hero protagonist into a quip-making action star, kind of a femme fatale Spider-Man. The tone is fairly light and sprinkled with levity, winking at the audience.

Catwoman uses her wits and fighting skills as a world-class jewel thief, often landing herself in sticky situations. There are cute winks and nods to Catwoman’s past. Selina attends a costume party dressed in her classic purple outfit from the Bronze Age comics, a personal favorite. Her beloved pet cat Isis plays a small role in the story and her friend Holly is name-dropped, though she doesn’t actually appear.

The biggest issue in the action-driven story is the lack of any real stakes. Selina is always one step ahead of her foes and allies, including Batwoman. Even when fifty ninjas attack the duo, the battle is played more for laughs than a life-and-death threat.

Elizabeth Gillies, the primary star on Dynasty, voices Catwoman. The actress is apparently a gigantic fan of the Batman villain and her rambunctious, sexy take on the character spices everything up. She’s a cut above the rest of the voice cast, who deliver stiffer performances.

Stephanie Beatriz isn’t great voicing Batwoman, using an awkward delivery undermining the dialogue. Jonathan Banks as Black Mask sticks out as another sub-par performance. However, Gillies makes for an excellent Catwoman and I wouldn’t mind her becoming ‘the’ voice for the character going forward.

Catwoman: Hunted is a light adventure thriller starring Catwoman and Batwoman driven by constant action and endless quips. Inspired by anime like Lupin The Third, the movie is an off-beat but fun take on the feline super-villain. It’s far more successful merging Western superheroes with Japanese anime tropes than the much different and polarizing Batman: Ninja. 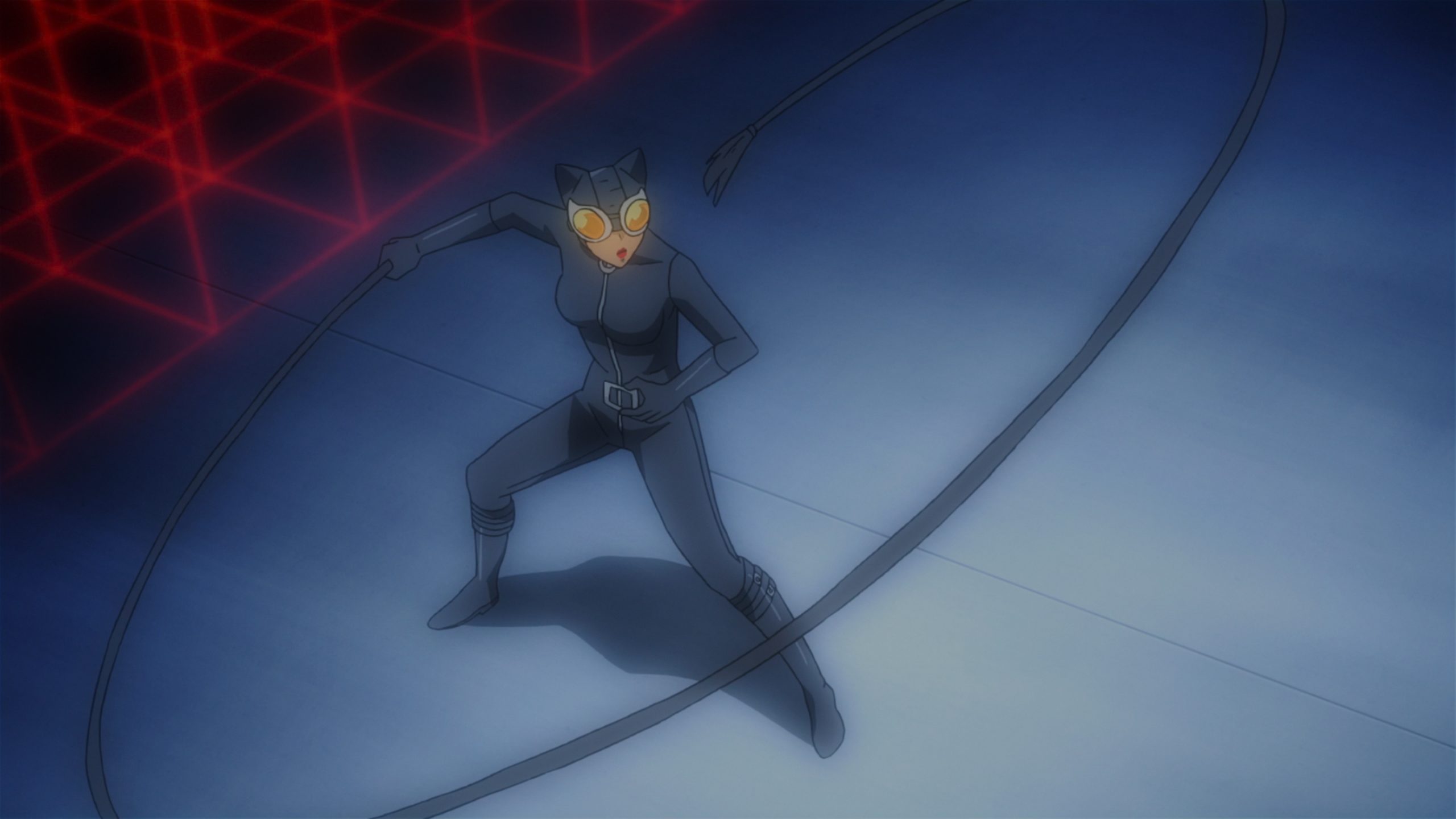 Catwoman: Hunted has been animated in Japan, melding Western and Eastern influences in its clean two-dimensional animation. Character designs reflect anime-inspired stylistic choices, especially when Batwoman pulls her mask off and the less fantastically-dressed humans. Western audiences will notice how the female superheroes are depicted with more sex appeal.

There’s nice enough saturation and an even contrast in the bold color palette but the tone mapping is underwhelming. Even the black levels, normally perfect in most modern animation, are not quite reference material.

It should be noted this UHD lacks Dolby Vision, but somehow the streaming 4K VUDU copy has a Dolby Vision pass. Speaking frankly, there isn’t much difference between the 4K UHD’s video quality and the regular Blu-ray on an average-sized screen. Unless you are a fanatic about color banding and minimally improved gradients, there’s little recommending this disc over the cheaper Blu-ray unless you are a collector.

Generally I recommend getting the UHD for DC’s animated output but this movie’s distinct creative process out of Japan limits its potential picture quality. This is not an essential disc over the fairly solid Blu-ray edition.

WB Animation and Warner seem committed releasing their entire DC output on UHD, but they continue avoiding more immersive Dolby Atmos soundtracks for true next-generation audio. I guess the budget for these animated films preclude it, which is a shame considering their excellent audio design.

The included 5.1 DTS-HD MA audio is a strong track with constant surround activity and powerful imaging. The discrete mix has clean channel separation and a nice kick from LFE. Explosions, car chases, and super-powered fights rock the soundstage with crisp energy. This isn’t the best audio from a DC flick but it’s another well-done soundtrack that can light up a good home theater.

While I think the voice talent on Catwoman: Hunted is hit or miss, dialogue is always rendered smoothly in the bigger dynamics of a rousing musical score and sonic action effects. Composer Yutaka Yamada’s great score pulls moves from the Lupin III anime franchise.

It should be mentioned Best Buy is carrying this 4K UHD release in an exclusive SteelBook edition with unique cover art. The widely available retail 4K UHD version arrives with a cardboard slipcover, a Blu-ray copy of the film, and a Movies Anywhere (MA) digital copy which redeems in UHD video quality.

Like most UHDs from WB, all special features can only be found on the included BD. There are only two bonus features, but they total nearly an hour in length. Missing are the usual array of trailers, previews, and related DC cartoon episodes.

When The Hunter Becomes The Hunted Featurette (18:57 in HD) – This all-new featurette has participants like comic book writer Jeph Loeb, James Tynion IV, Catwoman writer/artist Joëlle Jones, and writer Greg Weisman discussing villains who appear in the movie, such as Tobias Whale, the Cheetah, Solomon Grundy and others. Catwoman’s motivations, and changing roles as her character has evolved over the years, is examined.

Catwoman: The Feline Femme Fatale (39:52 in HD) – A captivating documentary on Catwoman’s history across several mediums, including television and film. It’s a concise summary of the character’s development since her earliest days in the comics. Interview clips feature a wide array of big names in comics and people associated with Catwoman, including Bob Kane, Alex Ross, Frank Miller, Julie Newmar, Michelle Pfeiffer, and more.

Full disclosure: This disc was provided for review by the studio, which plays no part in DoBlu’s editorial standards. For DoBlu’s policy on how we handle all review material, please visit our about us page for more information.

An anime-inspired romp starring Catwoman in her own solo adventure with Batwoman, taking cues from such sources as the James Bond franchise and Lupin the Third.