Under the guise of a time traveling mafia story, Looper misdirects and instead takes viewers through a deeply personal fable of choice, free will, and empathy. In fatalist future, Joe (Joseph Gordon-Levitt) is raised to kill – but he never sees his victim’s faces. It’s impersonal, indifferent, and just a job. Joe lives carefree; he torments the homeless. Then his future self falls in love.

It’s such a direct “guy” movie concept in the traditional Hollywood sense. Bruce Willis, gunplay, high-action, murder; Looper fits to form, then upsets that marketable ideal by forcing Joe to confront his choices. Suddenly those he will kill have faces – young faces – and the mere thought is enough to elicit a crisis of conscience.

Looper makes it okay to murder, to die. Men sent from the future to the past willingly accept they’ll one day shoot themselves to close the time loop. It’s what they sign up for in a society clearly collapsing economically. A well-paid early exit sounds like a reprieve. There’s no joy in all this death, just numbness because it’s treated so impersonally. Even in Looper’s present, the sheer lack of caring and callous behavior toward one another is distressing. Joe will continue as such until he’s forced to see the repercussions.

Action cinema rarely affords the victims any consideration. Certainly, Bruce Willis starred in enough gun-toting classics to off countless people, few even given names. Looper’s outspoken, anti-violence theme proves smart and commendable. How many guiltless killings created evil? Think of sequels that put the villain’s siblings or children in a position of deranged power because the hero “won” in the first movie. It’s a cliché, one that Looper exploits.

The sci-fi elements are secondary, a device, not the focus. Looper concerns the characters placed within this grimy circumstance. Joe’s journey takes time. He has to look people in their eyes to understand the impact he makes on the world. Once arrogant and selfish, Joe needs to weigh an escape from this life against the future he knows will happen. That’s Looper’s intelligence and maturity, climaxing emotionally, costing Joe a loving marriage and peace, but allowing others stability. The world needs more Joes. 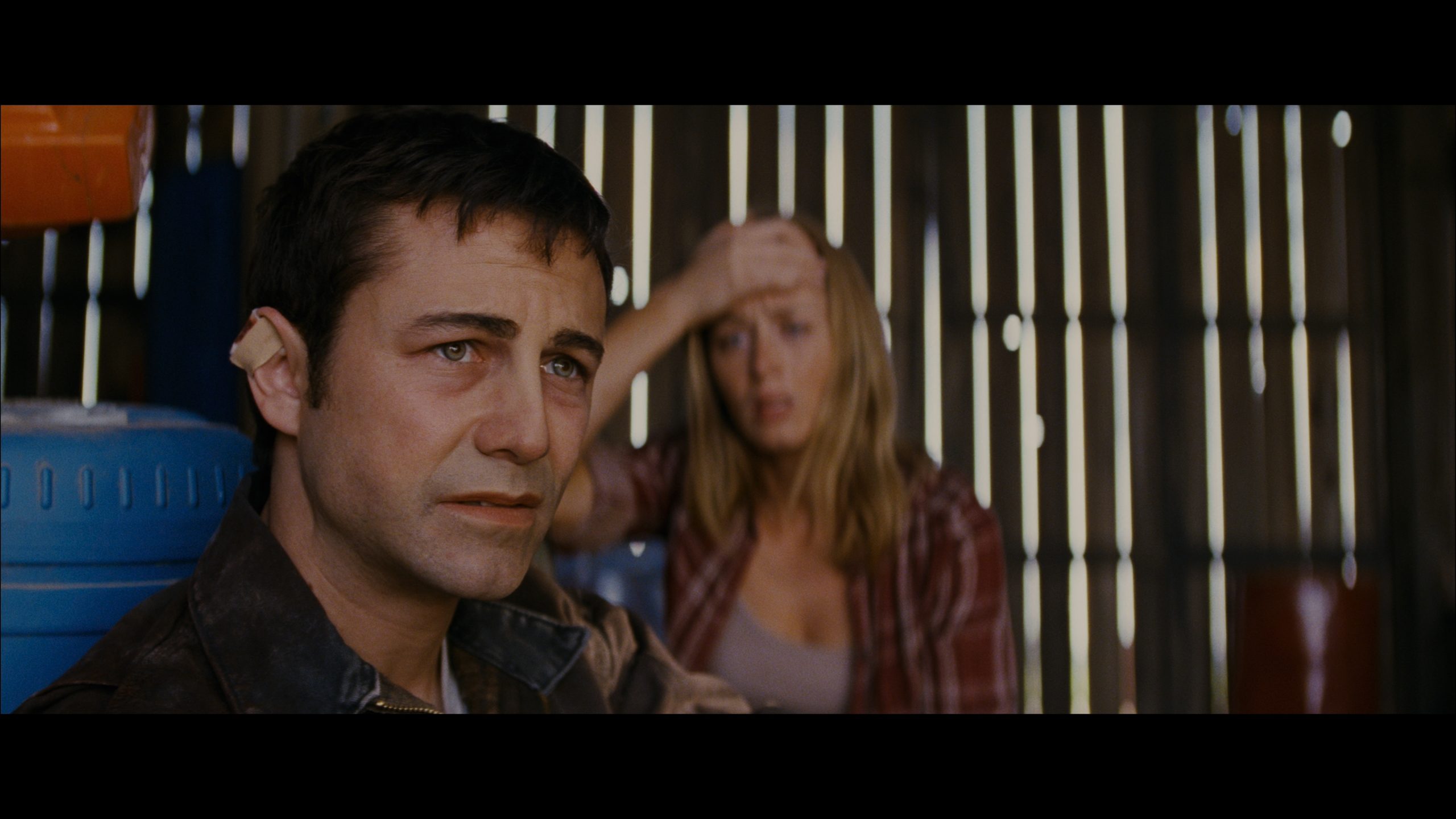 Originally a 2K finish, Looper is reportedly a rare case where the original film stock was rescanned at 4K. However, it doesn’t carry the precise sharpness of most 4K masters. Yet, Sony’s efforts make a decent jump over the Blu-ray. While resolution isn’t striking, detail does break through the softer source. In close, facial definition pops, well textured, defined, and clean. Some excellent exteriors of digital cities and mid-western plains reveal the same tight detail.

Cinematography choices will crush shadows in places. Sony’s UHD takes those black levels to a deeper level, then emboldening light sources in a notable, intense way. Against the city’s nighttime skyline, signage pierces the darkness spectacularly. Looper isn’t shy about showcasing the format’s potential dynamics, and making the upgrade a worthwhile one.

With bass that could shake the Titanic, Looper’s ridiculously powerful low-end rumbles potently every time a gun fires or when club music kicks up in full. Range is extreme, and even that’s an imperfect descriptor. This Atmos track isn’t shy.

Also superb, surround use maintains a near constant presence throughout the film. The score fills in during dialog, keeping activity high, even the heights. Small touches like people knocking on doors come from the appropriate direction. Ambiance in empty rooms spread electrical hums and echoes smoothly. Vehicles sweep the skies, flawlessly panning overhead in a perfect extension of the original mix.

Sony copies their previous Blu-ray’s bonuses. Director Rian Johnson joins two of his stars, Joseph Gordon-Levitt and Emily Blunt, in a commentary track. A whopping 22 deleted scenes follow with optional commentary, running over a half hour. The Future from the Beginning is an eight-minute promo you’re better off without.

The Science of Time Travel is a fun, surface level discussion on the possibilities of traveling through the ages, offering baseline information that is just enough to make you think. Scoring Looper is great, split into three sections as composer Nathan Johnson works through the process of creating. A stack of trailers remain.