It’s not the werewolves that invoke fear in The Howling. If anything, the lycanthropes are secondary monsters. Instead, it’s The Howling’s cynical worldview, a wholly disheartening take that believes society is crumbling and primal urges drive us, supported by a degraded culture.

The Howling is relentlessly cynical and vicious

From there, The Howling is a story about victim hood, and progressively ahead of its time in depicting Wallace as a lost, rejected woman society no longer wants. She’s labeled unprofessional for not being able to work as the trauma consumes her. At night, her husband rejects her advances. Only her closest friends trust she was attacked.

Sent to a camp for recovery, Wallace witnesses a man blamed for attempted suicide – he does it only for attention, Wallace is told. No one seeks to understand the horror others experience. Instead, they blame, initiating an inescapable, torturous spiral.

This is unusual for director Joe Dante whose lighter horror fare finds a comic tone. Not The Howling, which is relentlessly cynical and vicious, completely divested from Dante’s typical infatuation with 1950s era sci-fi/horror.

When the werewolves appear, it’s disappointing. What came prior is so authentic, brutal in its honesty, and aggressive in its tone, the fantasy elements diminish those successes. That isn’t a knock against the visual effects that competently portray lycan transformations (if to a lesser degree than American Werewolf in London), rather the shift that makes them the forefront over Wallace’s terror. Visualizing those fears so deliberately, rather than ambiguously, costs The Howling thematic value.

There is one trick left for The Howling: the final frames that make even the gentle Wallace succumb to the social decline. People watching her broadcast adore the show – to them, it’s great television, not a collapse of basic standards. The Howling carefully balances a line between becoming that trashy entertainment and commentating on it. Few succeed as such. The Howling comes remarkably close. 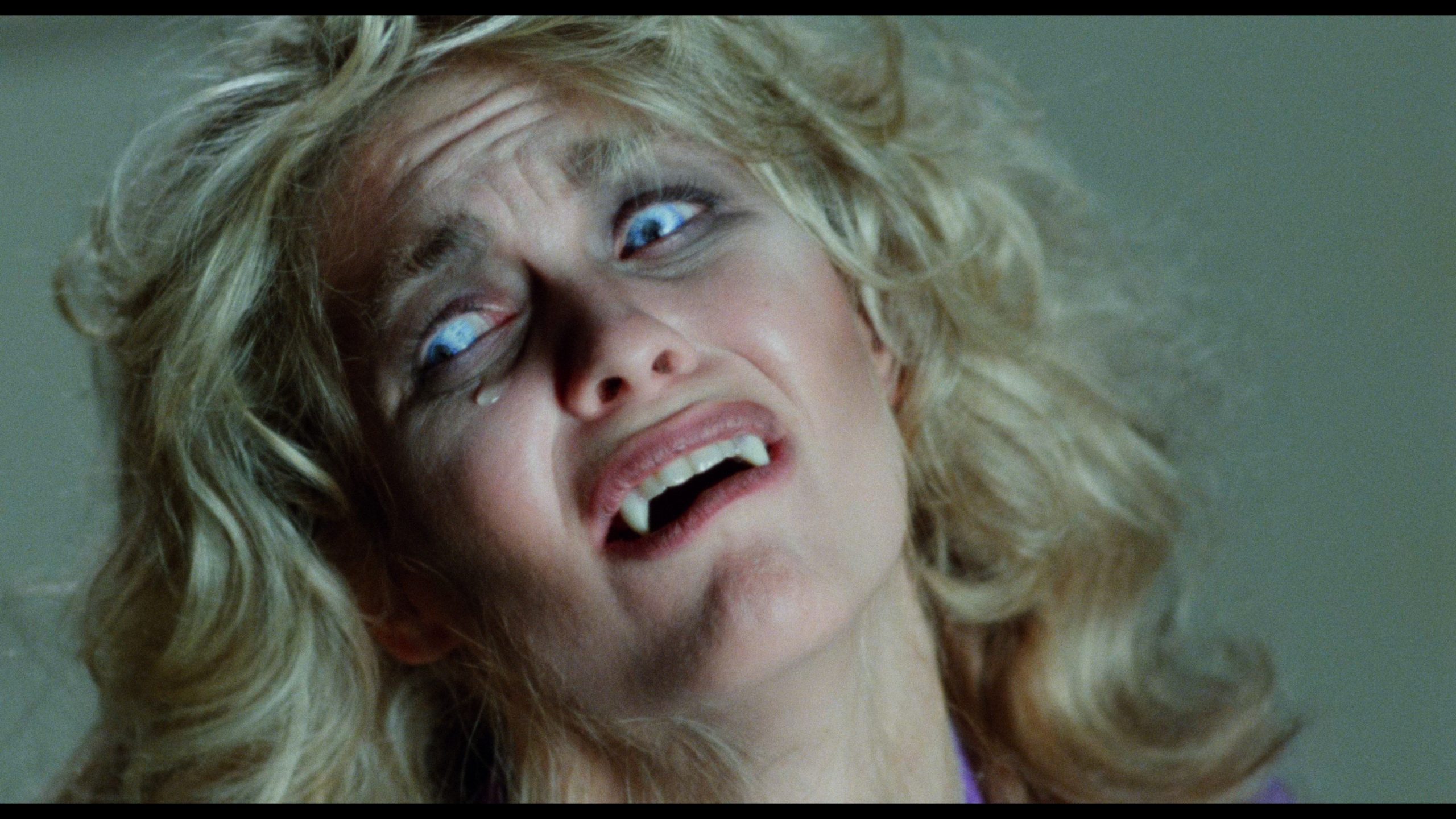 Licensed from Studio Canal, Scream Factory brings over a gorgeously sharp, precise master that captures the source at true 4K. A tiny, managed grain structure allows a capable encode to process the imagery flawlessly. A misty aesthetic naturally softens the material but to no detriment – the encode still does its best work, and detail keeps popping from the screen. Texture appears in gobs, pure, refined, and dazzling. There’s not a fault on the print either; it’s completely clear.

Organic color rendering turns vivid only as needed, like the red lights in an adult book store or the city’s neons. Otherwise, precise flesh tones match perfectly to the dense primaries. Dolby Vision adds a sublime beauty to the film stock’s inherent quality. Likewise, the pleasing range adds the right amount of dynamic contrast. Intense highlights reach a satisfyingly high brightness, one of those careful HDR applications that doesn’t draw undue attention to the lights, but gives them increased pop. Black levels look better still, heavy without crush, absolute black as needed. The Howling probably won’t look better than this. Ever.

Included are a trio of DTS-HD tracks – the original mono, a stereo mix, and 5.1 update. Each shares a consistent fidelity, struggling a touch when at peak treble, but minimally so. Dialog reveals age too, yet also a marginal concern.

Expanded into the surround era, 5.1 stretches the sound cleanly. Mostly, it’s centered with occasional bursts into the rears where necessary – and only necessary. Motion between channels is handled smoothly.

The Howling is a ruthless look at social decline, and more chilling for its perspective than its werewolf elements.