Legendary Weapons of China is an unqualified Shaw Brothers classic and essential part of their canon. Offering a heady mix of creative swordplay and spectacular martial arts set pieces, the kung fu extravaganza stars such genre luminaries as Liu Chia-Liang (Drunken Master II) and the always fantastic Gordon Liu (The 36th Chamber of Shaolin). Arriving in 1982, Shaw Brothers had already mastered the genre by this period and their kung fu craftsmanship is on skillful display in Legendary Weapons of China.

Liu Chia-Liang writes, directs and stars in the high-flying kung fu adventure, bolstered by an excellent cast of familiar Shaw Brothers players. A band of assassins are sent after the elderly Lei Kung (Liu Chia-Liang), a wayward member of a magical kung fu order whose actions threaten their society’s standing.

Opening with one of the most stylish sequences in Shaw Brothers history, combining elaborate gymnastic moves with magic tricks, the Yi Ho Society is a mystic order which fuses martial arts with supernatural elements.

Set during the Boxer Rebellion in China, master Lei Kung knows their society’s “invulnerable” technique has no answer for gunfire. Not wanting to needlessly sacrifice his pupils against armed Westerners, Lei Kung disbands his regiment and goes into hiding as a woodcutter. His actions threaten the society’s standing with the Emperor and its reputation.

Legendary Weapons of China offers some of the most intricate fighting and choreography ever seen in a Shaw Brothers film. A little foolishness is thrown into the story, mocking standard genre tropes with physical comedy and even potty humor.

The plot drags in a confusing first act but quickly ramps up the action, making up for slightly muddled storytelling. Everything builds to a magnificent final act which includes Gordon Liu’s robed priest practicing Iron Head kung fu against Lei Kung, not to mention a brother-versus-brother showdown which employs all eighteen legendary weapons.

Incredible stunts, a cheeky sense of humor, and compelling characters under the guidance of Liu Chia-Liang make for one of the most enjoyable Shaw Brothers kung fu classics. Some fans may be put off by the supernatural elements mixed into the action but it’s flawlessly pulled off with real style. 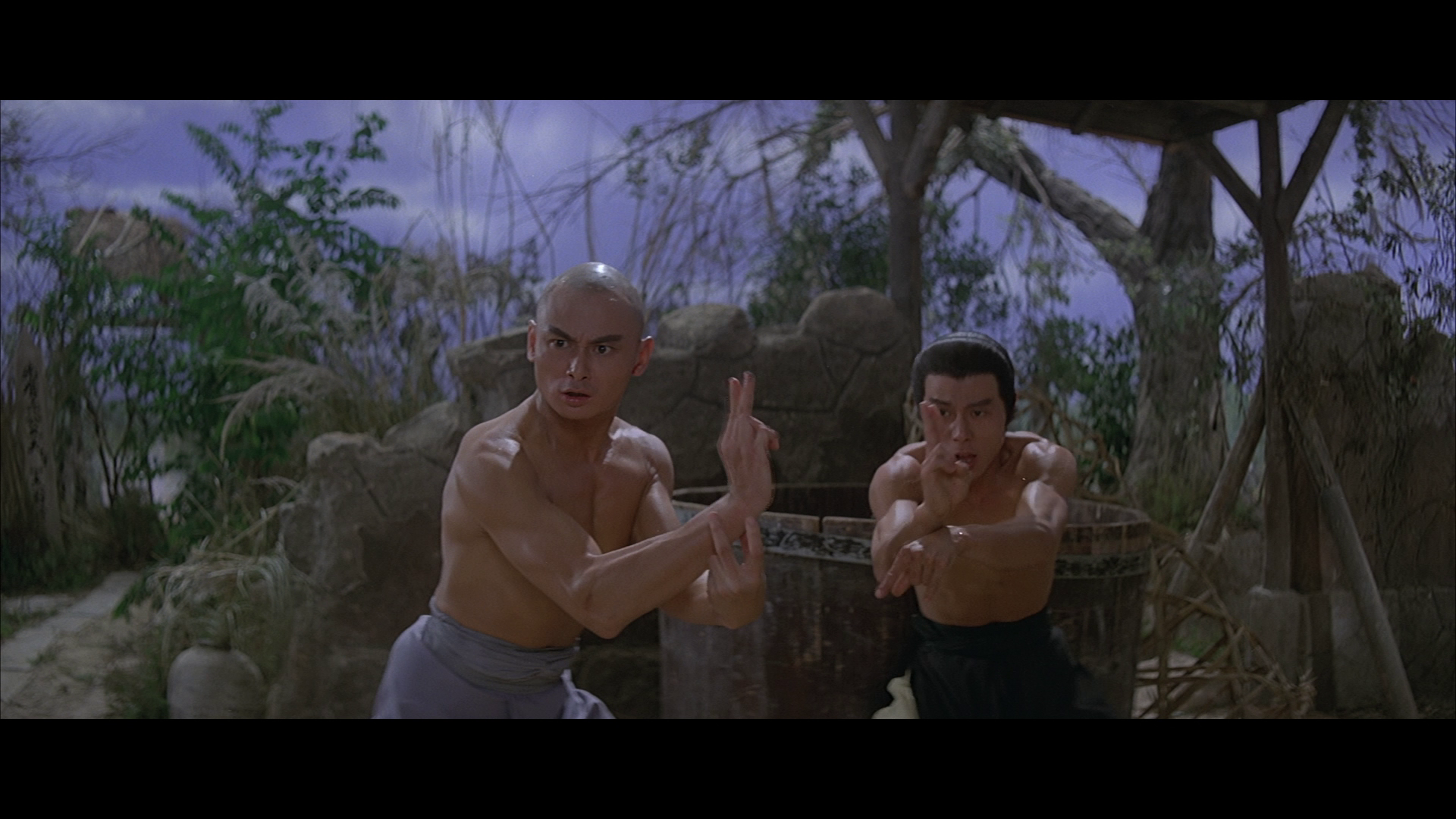 British label 88 Films has made a recent splash in America, releasing a number of kung fu films in the past year on Blu-ray like The Flag of Iron. The 1982 production from Shaw Brothers receives a new “HD remaster from the original 35mm negative” in its proper 2.35:1 aspect ratio. This is a good, solid transfer boasting superb color rendition and a clarity only marred by occasionally wonky action cinematography.

The main feature runs 105 minutes, encoded in transparent AVC on a BD-50. The stable film elements have a consistently pleasing contrast with virtually no significant damage. The slight presence of ringing in select scenes doesn’t mar the largely cinematic feel and crisp definition. Depth and dimension aren’t particularly impressive, Legendary Weapons of China is on the softer side.

This Blu-ray provides a dramatic leap in picture quality over DVD, offering sharper 1080p video with enhanced fine detail. Black levels are serviceable though rarely tested. Some have questioned if 88 Films filtered this transfer on some level, as there’s a touch less grain than one expects for the given film stock. Close-ups could have more high-frequency information.

English dubs of Shaw Brothers films are always a blast and this is no exception. It’s fun and lively, each voice appropriately fitting each character. The intended Cantonese audio may run slightly hotter, pushing the soundtrack into uncomfortable moments.

Optional English subtitles play inside the scope presentation in a white font. They are not dubtitles but offer a new English translation of the Cantonese audio.

Where has 88 Films been all these years? They bestow Legendary Weapons of China with a packed special edition which honors the kung fu classic. It’s ridiculous one of the Shaw Brothers’ better films has taken fifteen years finally hitting Blu-ray. The Chia-Liang Liu flick is #30 in their 88 Asia Collection, arriving loaded with extras and a deluxe booklet.

Three separate commentaries, an archival interview with Gordon Liu, and other supplements provide the proper context in appreciating Legendary Weapons of China for newcomers.

The commentaries are hit or miss. They are more for die-hard Shaw Brothers fans than casual viewers. The discussion between Leeder and Venema is quite lively but it’s not a particularly informed break-down.

Each copy comes with a double-sided A3 foldout poster inside. The illustrated 24-page booklet offers a new essay on the film by Andrew Graves.

The BD itself is coded for Regions A & B and duplicates the content found on the UK disc.

Eighteen Weapons (13:18 in HD) – A new video essay by David West on the movie which points out its major themes and discusses his own fandom dating back to VHS.

Gordon At Shaw (15:09 in Upscaled HD) – An interview with actor Gordon Lui by Frédéric Ambroisine from 2004, made for the movie’s French premiere.