Ramon, the title creature’s name, was lucky. He found a home where the worst people on the planet reside, from scummy newspaper reporters to animal abusing pet shop owners. No surprise the town is run by a corrupt mayor who’s bought by a local pharmaceutical company, and they’re also ethically void. Ramon needs only to sit and wait; his meals will come.

Alligator isn’t intelligent cinema, but it is hilariously cruel and morbid. The script hates everyone except working class hero cop David (Robert Forster) and herpetologist Marisa (Robin Riker), and even they have ego issues. Although the basis is in urban legend – the rogue gator prowling sewers – Alligator, without nuance, encapsulated an entire decade to come. The world is dirty, crime-riddled, and the only feelings people have toward one another is contempt. Alligator’s worldview is so broken, police sarcastically joke when they find body parts floating in rivers. To them, it’s routine.

What starts this mayhem? Also terrible, irresponsible people who purchase a baby alligator for their daughter, then flush it when dad flies into a heated rage. Alligator rightfully hates the pet trade and its general cruelty. The script isn’t fond of science either. Other than police work, Alligator doesn’t respect anything it seems, bashing science’s through a smug superiority, capitalism via a moral vacancy, and local media’s aggressive exploitation as seen by a reporter.

Yes, the story rides Jaws’ success, but that’s yet another callous mean streak running through this production. Alligator never cares because the chosen perspective is so outwardly cold. Whatever Alligator is mining for material pales in comparison to the criminality of its characters.

Writing Alligator off means ignoring that it does things well, including effective tension derived from the steamy sewer environment (a perfect setting in a movie intentionally grim). Robert Forster’s performance doesn’t speak down to the plot’s schlock nature, rather he plays it seriously, elevating a fight against an only partially successful monster. In full view, the phony rubber reptile deflates the tension. Mostly, the quick cuts smartly dodge the inherent limitations, turning the whole thing believable against total implausibility. Among the Jaws knock-offs, Alligator stacks up among the best. 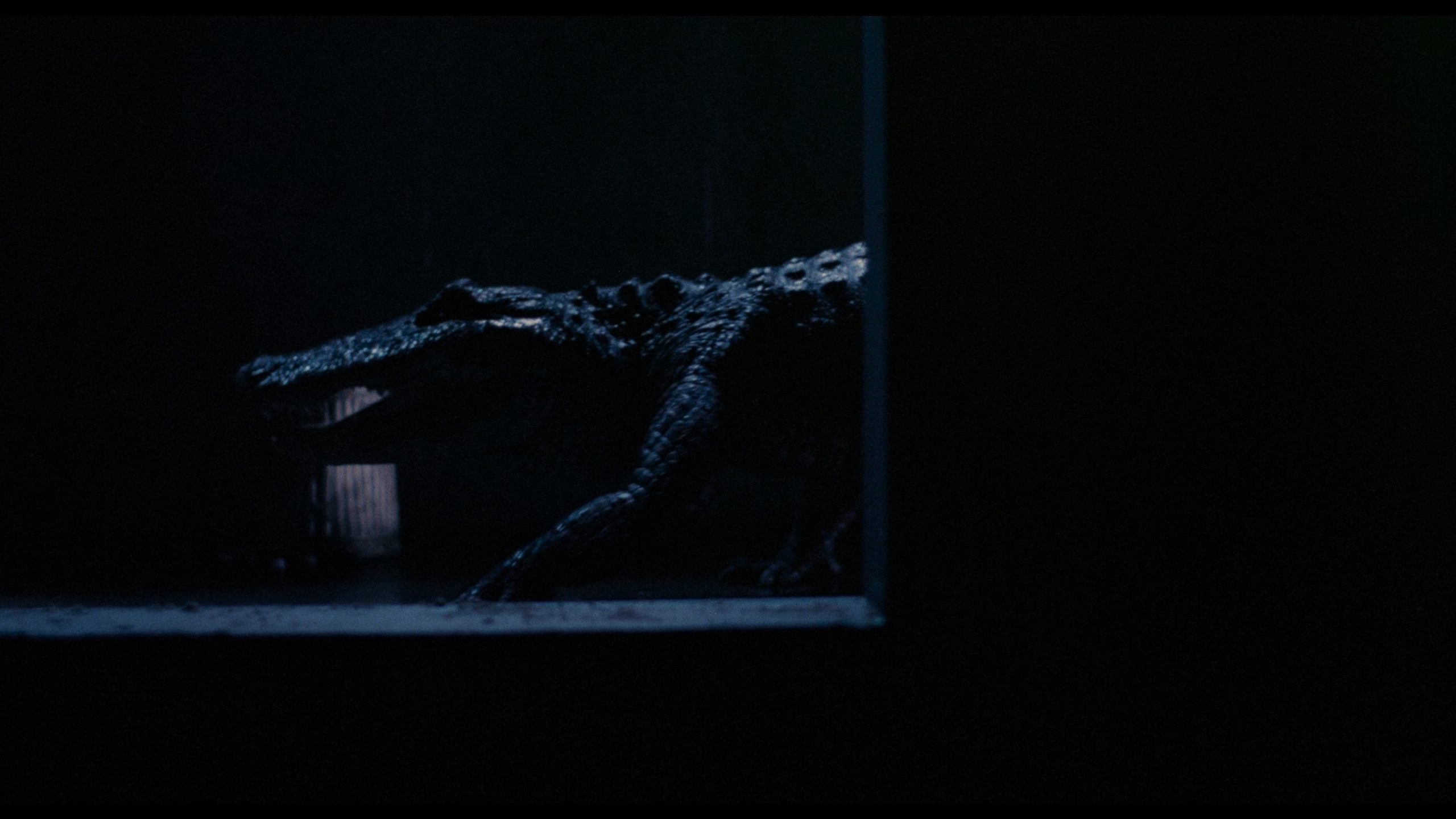 The result is detail topped by more detail. Alligator’s texture looks exquisite. Facial definition excels by way of the source material’s sharpness. Absurd resolution reveals everything and anything. Medium shots show the same complexity as close-ups.

Given a Dolby Vision treatment, black levels in the sewers never drop below the purest density. There’s no crush unless the cinematography calls for it, preserving shadow detail and then depth. Generous but natural enhancements to brightness boost sunlight glistening from the waves, or spotlights underground. Deep color enhances flesh tones, borderline too much so, but that’s looking for something to call out. Primaries perform consistently – vibrant, dense, and vivid.

Mono DTS-HD admirably keeps the track’s inherent precision intact. A minor flatness in the dialog shows the age to little detriment. Peak treble strains during major action, but also minimally. Given the audio needs to process echo-y sewers, blending running water and important conversations, the end result deserves praise for holding this together.

The UHD contains a commentary from director Lewis Teague and star Robert Forster. That’s also on the Blu-ray, along with the other bonuses. Scream/Shout Factory tracks down Teague for an additional interview, plus Robin Riker and effects man Robert Short. An older interview with screenwriter John Sayles is followed by a Trailers from Hell episode, then additional trailers. On the third disc, Alligator’s TV version is included. The additional footage is scanned from an interpositive.