A Walk in the Sun is dull. It’s boring. It’s rarely exciting. Those are its striking, memorable qualities.

More than death, some members of A Walk in the Sun’s platoon fall off due to injuries. One gives in to dwindling mental health, a rare depiction of war’s non-physical toll. Others enjoy the opportunity, speaking philosophically as they wait for explosions and bullets. One even smiles at the thought of hearing gunfire.

A calm conversation between two soldiers asks who they’re fighting against. It’s slightly sarcastic in tone, if morbid as other unit members dig a grave for the fallen behind them. A Walk in the Sun is ruthless in a most unusual way, concerned with the mundane day-to-day as this troop wanders the Italian front, looking for something – anything – to fight. The movie’s title isn’t wrong. Instead, it’s a descriptor.

Personalities form. Characters are made. No one is defined by their weapon or skill, rather their likes and dislikes in a general way. But this is less about building camaraderie in an ultimately hollow story than it is biding time. The wait seems cruel; there’s too much time to think, too much consideration about the literal road ahead.

The isolating feel from A Walk in the Sun makes it stronger, the purposeful emptiness in terms of command and the total disassociation from intelligence causes intense doubt. Ideas begin to form about possible mine fields or tank attacks. Peace on a battlefield, it turns out, is worse than the conflict itself. Men distract themselves, worried about their next cigarette instead of a bullet. When violence happens, it’s almost numbing, even casual. The first victim loses part of his face, and it’s described in monotone dialog, not seen. This, before the troop even arrives on dry land. Already they accept the inevitable, and already, they’re prepared. 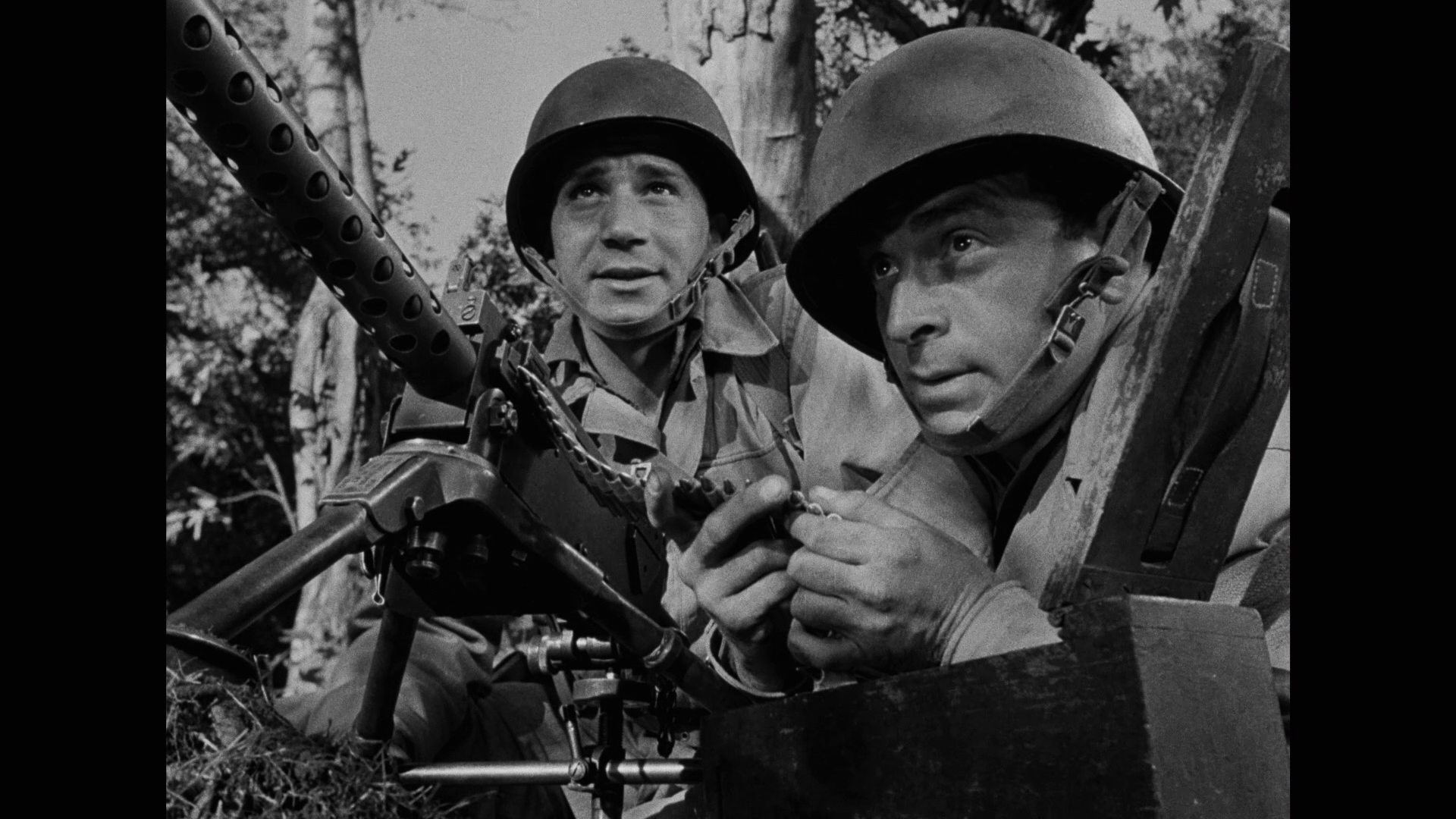 Carefully restored, remnants of a damaged source print remain. Minor distortion serve as a reminder, noticeable but not severe. Scratches and dirt stick around too, but nominally. The result? Pure, refined imagery, grain intact and easily resolved.

Natural sharpness in the film stock shines through on this Blu-ray, resolving exquisite detail. Cinematography quirks of the day aside, Walk in the Sun shows determined texture. Dirt and grass on the battlefield backdrops look just as stable as the facial texture in close.

Gray scale is a touch lean, restricting both extremes, if potent enough to drive dimensionality. Firm contrast suggests the exterior sun successfully regardless, and at their deepest, black levels keep shadows thick. Smooth gradients help though.

Static runs under the audio, a fair compromise to keep the fidelity smooth. A marginal toughness in the dialog and top-end treble sounds organic to the period. Time hasn’t degraded much, and this PCM track preserves the source.

The Blu-ray brings a commentary from author Alan K. Rode. The second disc is a DVD (!), and that begins with a 48-minute overview of Fox’s classic war films. Rode & Norman Lloyd speak at a screening of Saboteur and A Walk in the Sun, and that lasts 41-minutes. The Battle of San Pietro is a restored war department documentary short, reaching 38-minutes. A six-minute collection of Fox newsreels closes this disc out.

A Walk in the Sun

Long, ponderous, and thoughtful, A Walk in the Sun represents the authentic war experience both at its most grueling and dull.