Shaw Brothers’ moves to maintain interest in their kung-fu epics came not from their stories. Flag of Iron tells a wordy tale of betrayal and revenge between a martial arts clan that’s marginally engaging at best.

Instead, Shaw turned to the fighting styles. By 1980, crane techniques were out, and showmanship came in. While not logical, seeing a duel between two men waving flags is eye-catching and exciting, like an Olympic sport, but with life on the line, not a judge’s scorecard. Unorthodox weaponry replaced the usual swords and bo staffs. Now Shaw’s athletic roster use wooden stools or segmented weapons hidden inside an abacus – illogical, weird, even camp, but wonderfully creative.

Flag of Iron can’t sustain energy or momentum though. An opening act finds a local martial arts clan defending their village from crime like gambling and prostitution. It’s played for laughs, delivering on personality. Soon the tone shifts as hero Lo Hsin (Phillip Chung-Fung Kwok) is forced out on his own, allowing a corrupt leader to begin his rule. Per genre norms, Lo Hsin needs to overcome poverty and assassination attempts to restore his clan’s name, which is often done through those innovative brawls.

The script intersects with numerous side characters – too many – turning Flag of Iron into an unimpressive slog. Where the choreography is adamant about trying inventive things, the routine narrative flow is not. Heroes win, villains lose. If there’s complexity, it’s a bit part from an assassin whose questionable loyalty and honor bring moral instability to an otherwise direct fable.

Being patient means a small payoff. The shorter-than-usual finale can’t match an earlier scuffle inside a restaurant in terms of liveliness, even if the former carries greater stakes. The acrobatic flair collides into a hilariously violent end for many, Flag of Iron is never specific on whether aiming for pure fantasy or raw drama. That unevenness sours the usual form, if making for ridiculously pure grindhouse mayhem. 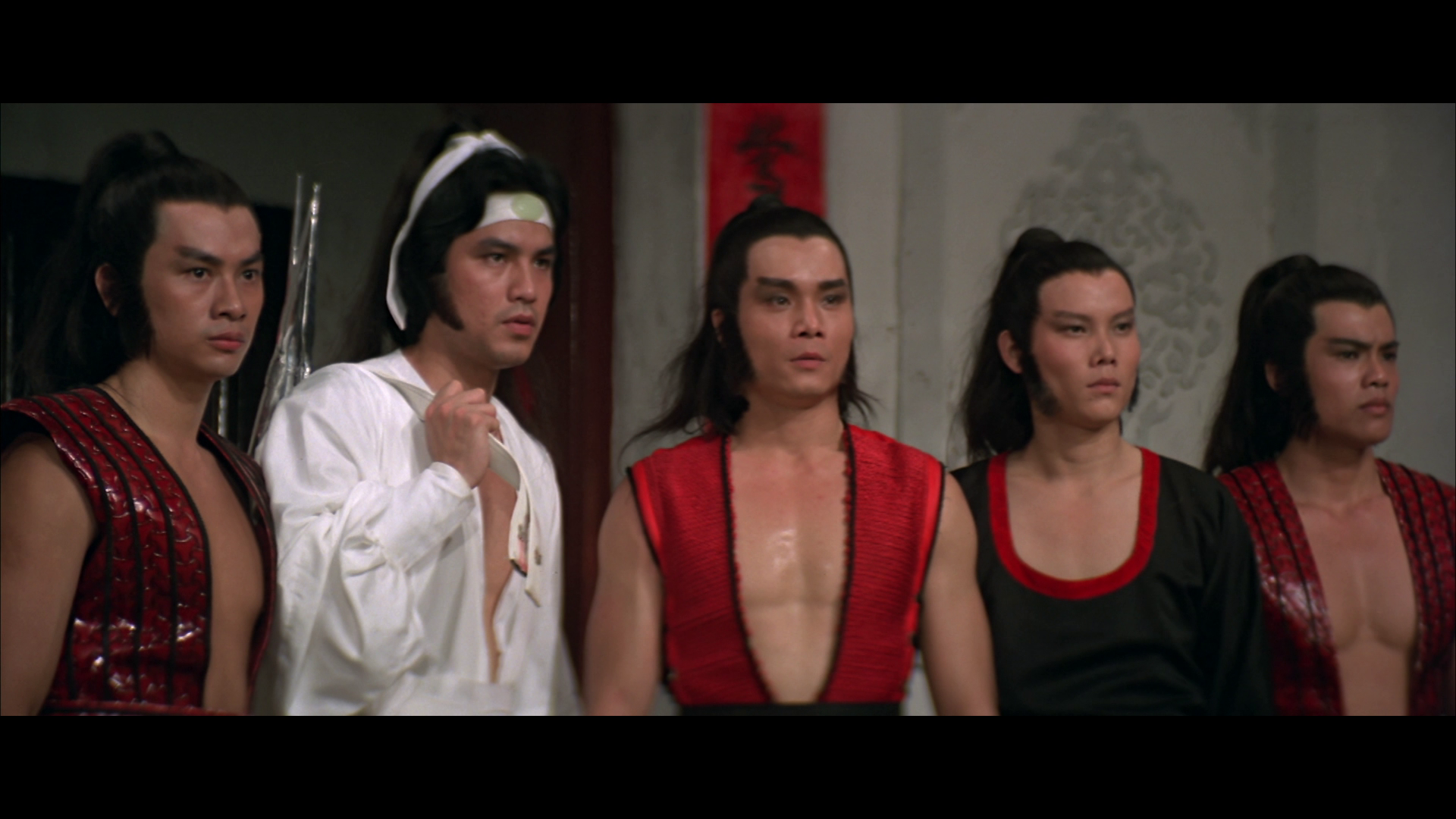 Marketing materials note a new master and that does appear true. Resolution and clarity both suggest a recently done scan. Nearly all damage is fixed, leaving Flag of Iron’s print close to perfect.

However, it’s an imperfect presentation. Grain does remain, although it’s potentially added after a filtering pass. Notable smearing occurs frequently, and medium shots suffer from a digital/oily appearance. Frozen grain is a regular impediment too. This causes an overall reduction in fidelity and detail, negating any gains from the fresh mastering. Some texture, of course, makes it through.

Rather average color replication brings a few primaries to the front, notably the red cloaks worn by the leads in the first act. The rest looks flat, including flesh tones. Dimensionality wanes due to the murky black levels, if assisted by a bright, perky contrast.

Mandarin and an English dub both come in PCM mono. Routine, worn dialog adds static to most spoken lines. It’s negligible. The score’s boomy drums allow range to seep in, the bass smooth enough to give this dated track life.

Asian film experts Mike Leeder and Arne Venema provide a commentary on the disc, which is great, but the included booklet with an essay by Andrew Graves is worth mentioning too.

The Flag of Iron

Betrayal and revenge serve as the core story to Flag of Iron, but it’s a film defined more by its creative fighting methods than its plot.