The great Ann-Margret (Viva Las Vegas) stars as a crazed, unhinged teenage sexpot in conflict with a stately John Forsythe in the fascinating Kitten With a Whip. Released in 1964 and primarily intended as a b-movie thriller for the drive-in movie market, the heated pulp action and ominously delinquent teenagers create an incredibly guilty pleasure made for cult appreciation. Star Ann-Margret running wild in one of her earliest roles provides plenty of cheap thrills and mayhem. Kitten With a Whip skillfully teases the line between pulp suspense and daring exploitation in its crafty screenplay.

Adapted from a novel, Kitten With a Whip begins with a teenage Jody (Ann-Margret) crashing one night in the home of a stranger. David Stratton (John Forsythe) is being groomed for political office when he discovers the seemingly vulnerable Jody sleeping in his daughter’s bedroom. David’s wife and daughter happen to be away at the time, leaving him alone with the seductive teen.

Fearing the public revelation of any perceived impropriety with the 17-year-old, David tries helping the girl out before sending her away. His helpful gesture isn’t paid back in kind. Soon the manipulative Jody will reveal she’s not all she claims to be, turning David’s life upside down and threatening to destroy his reputation.

Kitten With a Whip is a neat, twisting b-movie driven by its hilariously malicious teenage delinquents. David is coerced and blackmailed into performing their bidding, ostensibly to protect his marriage and future chances in politics. The taut action and unpredictable surprises make for a wild, fun ride.

John Forsythe is perfectly cast as a politician with mostly good intentions, swept up in these evil kids’ crimes. Ann-Margret’s magnetic screen presence compensates for an acting performance all over the map, practically portraying a schizophrenic character with multiple personalities. She alternates between sweet and psycho like the flip of a night switch. The 1960s star wasn’t particularly happy with the movie and thought it hurt her career in Hollywood.

Many earlier cinematic influences coalesce in Kitten With a Whip. Cape Fear, The Night of the Hunter, The Three Faces of Eve, or any number of teenage delinquency films from the 1950s, it’s a heady blend of pulp and noir themes coming together. There’s an intrinsically kitsch aspect to most of these characters, especially after we meet some of Jody’s interesting friends.

Kitten With a Whip is early exploitation from an era before we knew what that term actually meant, a cheap but entertaining thriller mostly made memorable by a striking Ann-Margret. 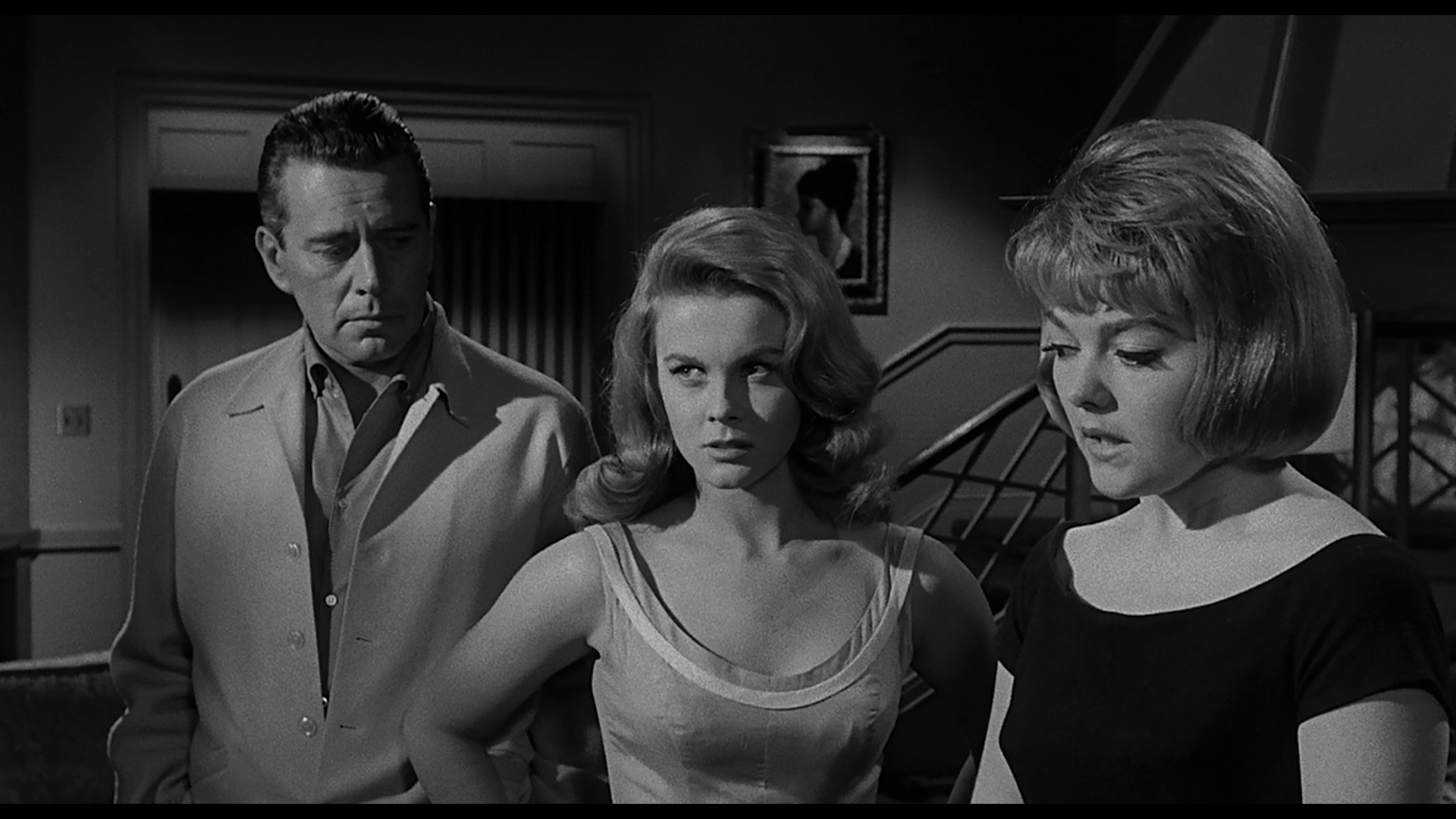 Kitten With a Whip is a cheap black-and-white film made by Universal in 1964. Various sources indicate the original theatrical aspect ratio was closer to 2.00:1 than this opened-up 1.85:1 presentation. Australian label Imprint Films licenses a respectable and eminently enjoyable transfer from Universal themselves, who released the film only two years ago on BD in North America. There are likely few substantive differences in video quality between the two releases other than Imprint’s improved AVC encoding.

The 1080p video reflects a positively decent transfer with satisfying sharpness struck from solid, untouched elements. There’s no indication of serious restoration but Universal seems to have taken better care on Kitten With a Whip than many of their older catalog titles.

The main feature runs an uncut 83 minutes on a BD-50, given a generous AVC encode. The dense grain and dark shadows pose few issues. Stable elements produce a largely clean and consistent contrast, bright and highly detailed. The HD transfer is likely unfiltered but a few years old by this point, which manifests in reduced high-frequency detail and softer video at times. A 4K scan may improve things but I wouldn’t wait around for one.

Fans should be pleased with how this cult b-movie thriller has made Blu-ray. The movie receives an almost entirely film-like transfer with only a few scattered flaws, preserving everything great about its cinematography. The elements are in fine shape with just minor debris peppering the screen.

Dual mono PCM does an adequate job with the melodramatic b-movie soundtrack, featuring intelligible dialogue and average musical reproduction. Kitten With a Whip’s musical score strains a bit when the orchestral soundtrack swells louder in the mix. The opening theme’s dramatic strings are fairly smooth. It’s a slightly thin recording with minor fidelity limitations. Some of the loudest effects are pushed into harsher tones in the higher frequencies. Largely driven by dialogue, these minor issues aren’t a serious concern.

The soundstage has a modest presence but dialogue is cleanly rendered. For a low-budget Universal production from the 1960s, this is probably the best Kitten With a Whip can sound without a major restoration effort. The audio here is serviceable but not exemplary.

Australian label Imprint Films has really stepped up their catalog game, licensing many older Hollywood movies and giving them new special features. Kitten With a Whip is a great example. The 1963 thriller was dumped unceremoniously on BD by Universal themselves two years ago, completely barren of bonus features. So even if you own the prior American BD, Imprint’s special edition is a major upgrade. The b-movie has never been treated so kindly on home video before this Imprint edition.

Imprint Films has rectified the lack of bonus features, providing the cult classic a new commentary and two lengthy documentaries. Obviously inspired by Arrow Video’s success in the UK and America, it’s clear Imprint Films is giving all their catalog releases classy treatment. They seem to have even hired some of the same people who produce supplements for Arrow Video.

Kitten With a Whip is labeled #100 in Imprint’s catalog, arriving in a snazzy slipcase limited to the first 2000 units. Collectors will definitely want the glossy slipcase featuring vintage movie art. Like many boutique labels now, Imprint uses a clear BD case in the regular Region B shape (identical to the old PS3 game cases).

The great news here for Blu-ray consumers across the world is that Imprint’s disc is definitely coded to play in Region A as well as Region B. The movie and all special features work in Region A. Being a Universal license, it wouldn’t shock me if the disc was in fact region-free.

Audio Commentary By Film Critics Alexandra Heller-Nicolas and Josh Nelson – The new commentary has the informed pair eloquently discussing the film’s strengths and weaknesses. It’s a neat, topical discussion which flows relatively well between the two participants. Certainly worth hearing for fans as an adjunct to the film.

Faster, Pussycat! Kill! Kill!: The Rise of Delinquent Girls In Film (28:30 in HD) – A staple contributor for Arrow Video, film historian Kat Ellinger guides this video essay about the changing teen market of the 1950s and 1960s. It’s a fascinating capsule summary which helps explain the back-drop for Kitten With a Whip as popular culture started fearing teenagers on some level.

She Reached For Evil: Dissecting Kitten With a Whip (17:45 in HD) – A video essay on pulp author Wade Miller, who was actually a pseudonym for authors Bob Wade and Bill Miller, a writing duo who had a string of novels made into screen adaptations. Author and film historian Andrew Nette lays out their career in a fine capsule summary.

Photo Gallery (02:24 in HD) – A series of production and movie stills from Kitten With a Whip which should interest Ann-Margret’s fans.

Full disclosure: This Blu-ray was provided to us for review by the label. This has no effect on DoBlu’s editorial process. For more information on how we handle all review material, please visit our about us page.

Kitten With a Whip

A vivacious Ann-Margret and a stately John Forsythe star in the pulpy thriller about teen delinquency, a fantastic guilty pleasure for many reasons.