While the two ghost-driven series are unrelated, they share much in terms of style, tone, and writing. Their complex plotting and ensemble-driven narratives lack familiar pay-offs for regular horror fans. Instead they rely on emotionally-charged character building, structured more around relationships than frights and shocks.

For something which aired on no-holds-barred Netflix, The Haunting of Bly Manor easily falls under PG-13 scares

The Haunting of Bly Manor updates author Henry James’ classic ghost story The Turn of the Screw for a more contemporary setting, an English locale in the 1980s. Frankly, there’s little here identifying the period setting beyond token music references like Soft Cell’s hit “Tainted Love” and the absence of cell phones.

An American au pair crosses the Atlantic for a job taking care of two orphaned children, Flora and Miles. Dani (Victoria Pedretti) has left America behind, looking for a fresh start on life. She gets more than she bargains for while living at the secluded Bly Manor. Think of the series as a twisted love story with ghosts as the back-drop.

It’s an eclectic group of characters, all with troubled pasts in one way or another. The show’s ghostly drama unfolds as we learn more about the various relationships between each person, often revealing secrets from the past. Bly Manor is a place touched by darkness and recent tragic history.

Problems arise from the glacial pacing and overly timid horror, taking well too long to see where the story is going. Everything eventually comes together but it’s a long, drawn-out path getting there.

Paramount markets The Haunting of Bly Manor as a gothic romance despite it being a derived from a famous ghost story, the same one which served as the inspiration for The Innocents from 1961. Which possibly hints at the show’s intended target audience. Its softer edges and dramatic tone are clearly made for female audiences.

The series is not made for traditional horror fans and dwells heavily in melodramatic entanglements driving its storytelling. For something which aired on no-holds-barred Netflix, The Haunting of Bly Manor easily falls under PG-13 scares and content. A tiny amount of editing could even whittle it down to PG.

The storytelling does ply lightly in some supernatural conventions, often borrowed from The Sixth Sense. The spookier elements are effective but not particularly original. A big issue are the two very young actors playing Miles and Flora, who are asked for far more than they are capable of. Both get major screen time and unfortunately their characters drive much of the plot. By the back third, you may start rooting for the ghosts.

In the ensemble cast Victoria Pedretti contributes a vulnerable performance as the nominal female protagonist. It’s a solid cast outside of the children. The Haunting of Bly Manor has Carla Gugino providing a little narration in a nod to her involvement with The Haunting of Hill House.

Creator Mike Flanagan probably accomplishes what he set out to do with Bly Manor, though it’s not as satisfying or entertaining as his previous Haunting installment. 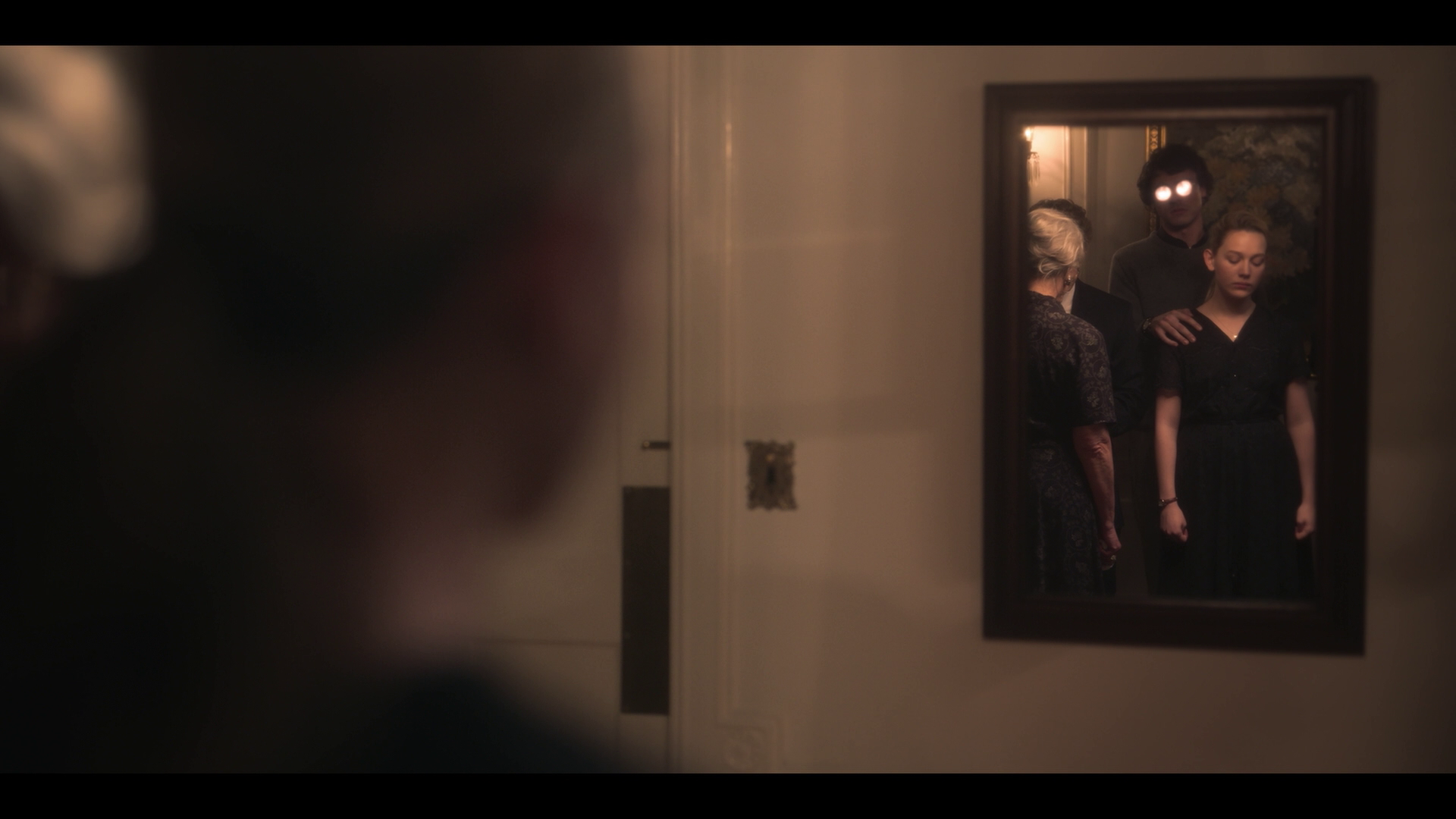 By all rights, this 2.00:1 presentation from Netflix should be reference quality. The streaming giant demands all their shows are filmed at 4K. Some curious cinematographic choices on The Haunting of Bly Manor drop it from perfection to the realm of okay.

While most supernatural movies go for a darker, moodier atmosphere, this series has a completely different approach. The impressive clarity and definition are constantly flooded with backlighting, giving the crisp video quality an ethereal feel in exteriors. Interiors are properly filmed with a rich contrast and perfect black levels. It’s a conscious but strange decision made by the filmmakers.

Otherwise the presentation is mastered with care and reflects a clean transfer replicated as well as 1080p video can handle 4K material.

A lot of effort and time has gone into making the creepy audio design a real part of the show’s personality for this stellar soundtrack. The dynamics are impressive and fidelity is incredible with clean, intelligible dialogue.

The three-disc set from Paramount arrives on home video with a slipcover and exclusive special features. The featurettes are nice snapshots of the production and how it was crafted.

Home for the Haunted: The Ghosts of Bly Manor Featurette (11:45 in HD)

Audio Commentary by Director/Creator Mike Flanagan – The creator gives a commentary for the opening episode “The Great Good Place.”

Audio Commentary by Director Liam Gavin – Covers “The Altar of the Dead” episode which he directed.

The Haunting of Bly Manor

The Haunting of Bly Manor

The Netflix series from Mike Flanagan adapts a classic ghost tale with mixed success, using an ensemble-driven narrative that takes forever to get going.