“After a careful, admittedly stubborn, exposition-laced opening act, Dune finds a voice through its imagery. The attempt to avoid the mistakes of David Lynch’s 1984 Dune are clear; Denis Villeneuve capably establishes Dune’s nuanced lore with clarity, specificity, and accuracy.”

Read our full review of Dune for more.

Although from a typically clean 4K source, Warner’s encode chokes a little on the diffused cinematography. It’s subtle, even minor, but smudgy spots in close-ups sap the finest detail. Texture can survive – even thrive – but that tiny hiccup is just enough to keep Dune from reaching the pinnacle. Plus, the heavier fog (Baron Harkonnen’s first appearance) can introduce banding in addition to artifacts.

Otherwise, this is pristine digital video. The minimal added grain brings grit, spiking in flashbacks, adding more bite and style. Cinematography controls sharpness, the decisions bringing a stylistic softness, if to no detriment to the precision. This is obviously true 4K imagery, even among heavy CG elements.

Stellar Dolby Vision touches add tremendous black levels to the screen, essential to preserving the visual intent. Shadow details are intact, the subtle shading gorgeous, and the disc capably preserves gradients. Flashes of brilliance make up the contrast as the intensity from flame and sunlight spares nothing in terms of nits. Sometimes the dynamic changes (say during rapid cuts in a dream sequence), it’s blindingly intense.

In terms of color palettes, Dune is on the predictable side, veering between blues and oranges, location dependent. It’s purely of this modern grading era. Lush Dune is not, if purposefully so. 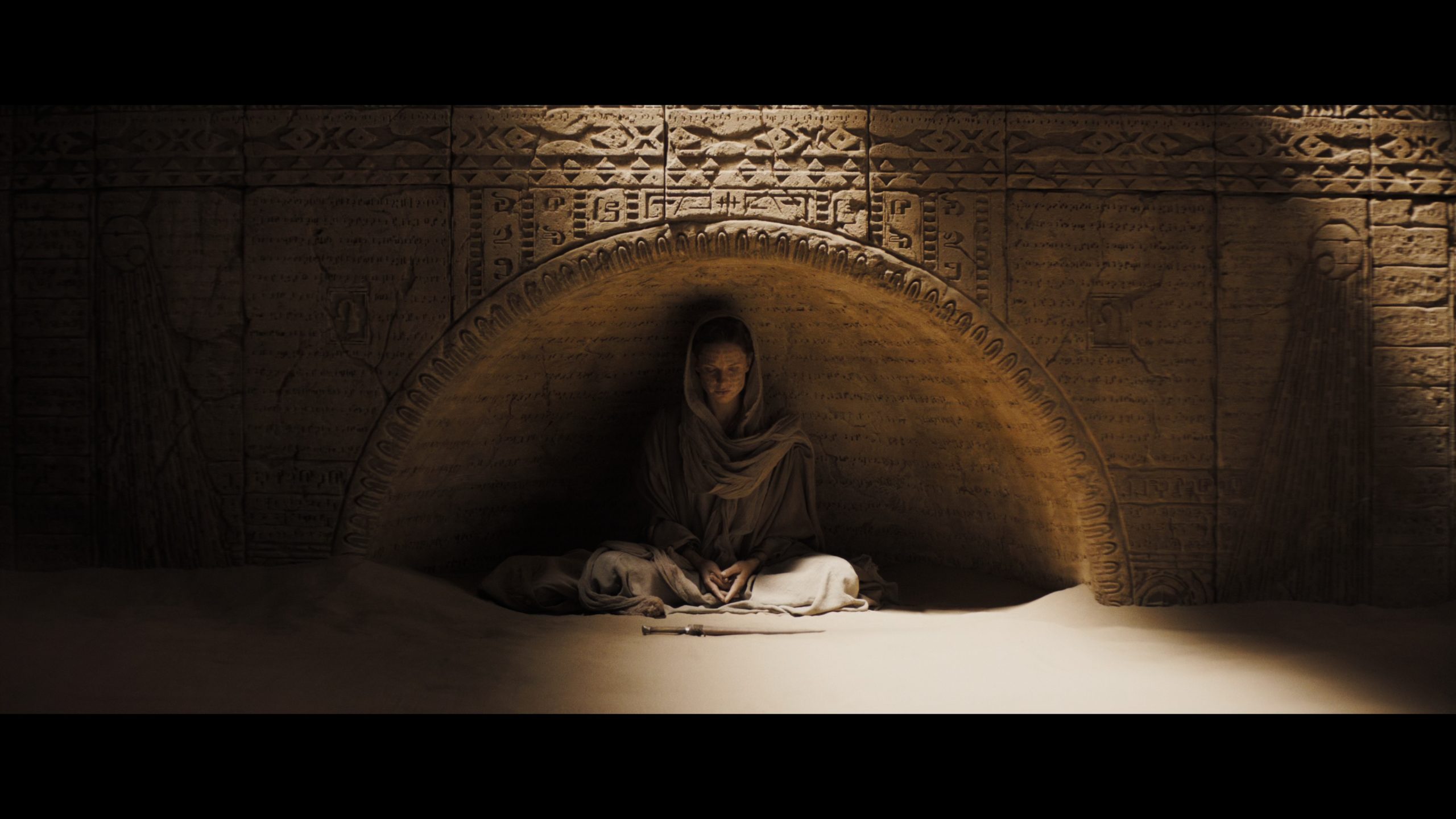 A monstrous score pounds warm drums, and choirs create ear-bleeding range. The jolts serve the needs of the visuals; there’s nothing subtle about the volume shifts. Explosions suck the air from the room. When ships take off, their engines roar, dropping incredible bass. Low-end support is spectacular, and when at its deepest, everything expected of a modern home audio mix.

Winds frequently whip through the desert, stretching the soundstage, plus ensuring the heights play a key role. That same directionality happens when inside vehicles. Ambiance sticks to every scene. Flying vehicles pan through the available channels with exquisite precision. Physical fights bounce shields and weapon clashes around the wide field. Motion is captured flawlessly, and it’s aggressive in making each movement notable.

The UHD is an empty desert in bonus terms. The Blu-ray holds the spice. It’s a slew of featurettes focused on specific scenes or things, all a few minutes long each, and none going in-depth. Without a play all option, navigation is clumsy, and the content isn’t worth it.