Steve McQueen plays the obvious hero in The Great Escape, the most American of American men who does things on his own, in his own way, all while holding close a baseball mitt, then driving through German territory on their own motorcycle. He doesn’t win though. He doesn’t escape.

He’s the outlier. Great Escape concerns the efforts to bond an international force against a singular foe. There’s something to be made of McQueen’s on-screen arrogance, that of the American who believes himself nigh invincible as the others take on names of their specialties. This script captures, in a truncated, digestible form, the war itself – America waits as Germany’s tyranny spreads, the other nations hustling their forces to the front lines together as one. It’s clever, without being overtly offensive.

Often carrying a sarcastic, even cocky tone, the POWs in The Great Escape make light of their situation. They know it’s dangerous, and shed their own fears by laughing at the odds. Post-WWII cinema often made the opposition into foolish dolts, but not The Great Escape. German forces are depicted with appropriate totalitarianism, domineering, and rightfully worth fearing. Both sides have experience in running/escaping such camps. It’s an equal fight, told with entertaining gusto in an effort to offset the inevitable tragedy.

Waiting to strike brings a definitive cost. Men like Ives (Angus Lennie) succumb to their mental state. In an unusually empathetic turn for the actor, Charles Bronson suffers from claustrophobia, his fears ever greater as the group nears their goal. Then, Donald Pleasence, the document forger, loses his eyesight as time passes. McQueen’s Hilts then charms in a pure Hollywood sense, if ultimately an anti-hero whose personal goals outweigh the greater cause. There’s nuance separating Great Escape from other POW films.

While confined to the camp for most of the runtime, the closing act begins a sprint through lush countrysides, demanding – and giving – the most of widescreen imagery. That lushness, filmed in real locations, dazzles the eye as much as it breaks from the dusty, deliberately bland prison. Just shy of three hours, Great Escape doesn’t waste anything, saving the purest action for last, while generating raw tension during the lead-in. Few films are ever perfect. Great Escape though is nearest to that goal. 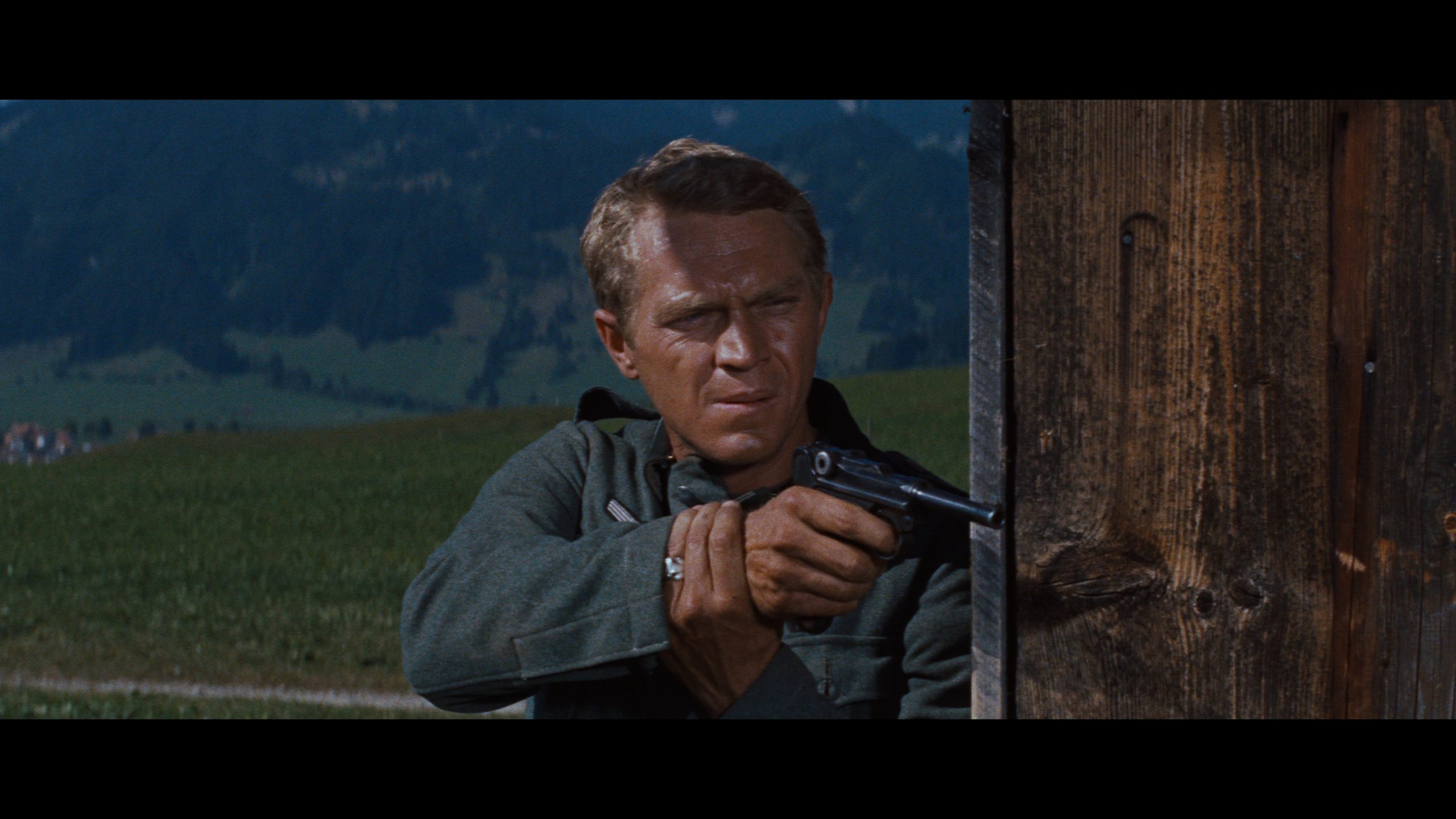 Kino’s cover art features the Dolby Vision logo, but that’s incorrect: The Great Escape did not undergo an HDR pass of any kind. While unfortunate, the amount of texture, sharpness, and clarity is marvelous. A nearly impeccable film print receives a massive encode, taking up 90GB of disc space; there’s zero compression visible, making this wholly transparent. Texture pours forth, from the facial definition to the wood shacks and the dirt making up the ground.

Even without HDR, brilliant contrast pushes sunlight onto the scenery with impressive intensity. At times, highlights almost clip detail, yet mastering ensures nothing is lost. Plus, there’s a pleasing amount of depth finds the shadows, potent in their density and weight.

In terms of color, the palette favors cooler hues. There’s a digital tinge to everything. Mastering skews more modern than vintage, although flesh tones prove striking. Their warmth and saturation impress. Nazi uniforms display a vibrant red trim, and surrounding greenery excels too.

Kino includes a 5.1 mix, but also a mono track unlike Fox’s previous disc. The modernized surround effort has immediate impact on Elmer Bernstein’s perfectionist score. Clarity is substantial, and the added bump from the low-end is not only clean, it sits naturally as the opening credits bring the film to life. All of the musical elements are beautifully preserved.

Other aspects carry some artificiality. Voices wander through the soundfield, perking up stereos and stretching the soundstage. Elements such as a train passing are delicately done.. Then, a plane taking off startles all five channels without any sensible direction, making you forget the subtlety of the train. It’s inconsistent, if appreciated.

No matter the qualms, Great Escape remains in well preserved hands. Clarity is afforded to more than just the score, with sharp dialogue from the period. Gunshots ring out as dated studio effects, nothing altered to further make them stand out.

On the UHD, Kino keeps things clear other than two commentaries, the first absolutely packed with cast members in a moderated conversation. On the second, a new chat with historian Steve Mitchell and author Steven Jay Rubin.

Over on the Blu-ray, bonuses mirror Fox’s original disc. Bringing Fact to Fiction is the first feature, 12-minutes chronicling the real life story and how it was translated into a successful film. Preparations for Freedom focuses on the escape process, Flight for Freedom detailing those who made it out. Standing Ovation is more of a blip on the critical reactions and from those who lived the film.

The Untold Story is a near hour-long documentary, loaded with interviews and recreations to build up the reality of the scenario. Another 10-minutes of cut interviews are offered afterward. The Real Virgil Hilts details the man Steve McQueen’s character was based on. Return to the Great Escape focuses on the location of the famous camp.

The Great Escape remains one of the great WWII movies for its showcase of bravado, perseverance, and endlessly entertaining characters.