What results is a focused character story, or two actually. One is about a prince unwilling to take the throne, the other a thief who simply needs grounding in his life to persevere. Together they become an accidental pair, putting aside their own bigotry to learn from each other in what becomes a mutually beneficial kung-fu plot that, in general, stays light in tone.

The genre clearly began to change by this point in Shaw Brothers’ chronology. Dirty Ho is less concerned with pure martial arts than stunt-filled and prop-filled showcases. At first, it’s simple, a wacky dance/fight routine involving a lute, then a marvelous stand-off over wine tasting, and a small miracle surrounding an antiquities viewing. Each is small scale, even subtle, but appreciably filled with eye-catching flourishes. The choreography is astonishing; the creativity is more so.

It matters little who the villains are. Dirty Ho lets the great Gordon Liu and Yu Wong play off one another in a bitter relationship. Wong spends much of Dirty Ho aggravated he’s stuck with Liu, and their back-and-forth banter delights. Come the training montages, it’s a wonder if the actors didn’t choose these absurd ideas to challenge themselves, as Wong places hot wax and candles on his shoulders while kicking to practice balance. More than once, flames flare on his skin.

By sticking to a lighter mood, minimal story beats about Chinese divisions between north and south fall to the wayside. Instead, this is more a fable about a corrupt leader trying to hold a position of power, and the man who defeats him doesn’t even want the reward. This says something about being one’s self, and although most won’t have the wealth belonging to a royal family to enjoy pricey hobbies, the theme remains prominent. Under pressure to be only one thing, Liu’s martial arts master doesn’t conform. Thus, his student, who believes he’s stuck in poverty, finds his way out too. It’s pure genre filmmaking joy watching them both come to the same conclusion. 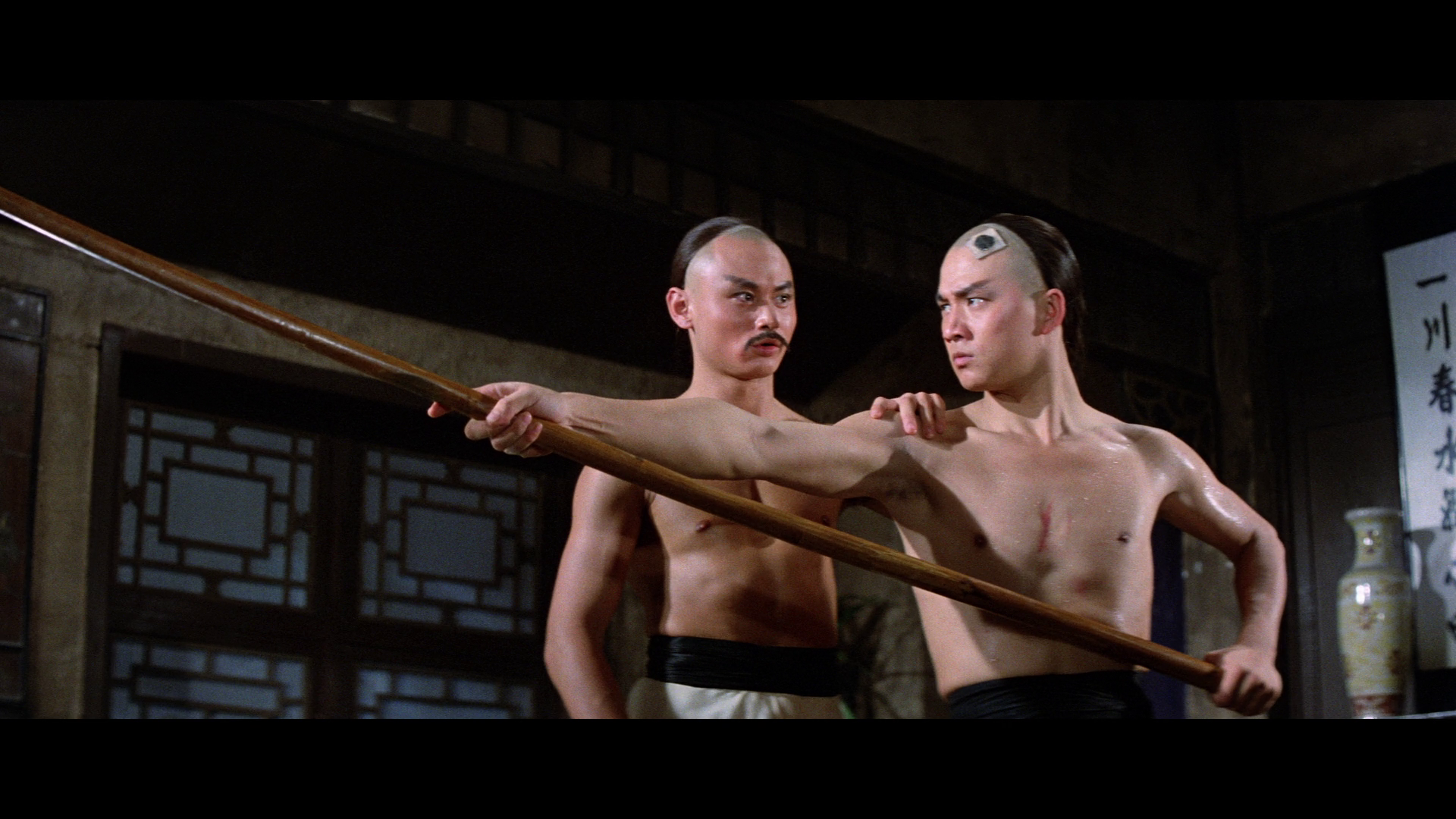 The Shawscope Blu-ray set closes with some of the best color reproduction in the box. The vibrancy is absurd, beginning with a decorative, well-costumed spectacle of primaries, soaked in reds, elegant purples, and and other dazzling flourishes. It’s incredible, and thankfully, Arrow’s encode doesn’t dampen the fun. The film grain retains a natural and organic presence.

From a flawless print, the master sports impressive resolution, having all the hallmarks of a recent scan, plus one close to the negative. As such, the texture shines, even when against hazier cinematography. Facial definition makes for pure HD splendor, and there’s almost no chance Dirty Ho ever looked this good in public previously, let alone at home.

Further giving life to this presentation, shadows hit perfect black, adding a dynamic depth to this movie. Dimensionality soars. With an equal zest for contrast, the presentation is an success overall, without a miss. It’s perfect.

Cantonese, Mandarin, and an English dub fill out the selections, all DTS-HD, all mono. Being the “newest” offering in Arrow’s set, Dirty Ho offers the purest original language mix. That doesn’t mean it’s without age issues, from the static-heavy dialog to thin treble. That’s standard and inoffensive.

A repeat of Tony Rayns visual essay from Heroes of the East, which is no surprise given the films occupy the same disc. Alternate opening credits, plus a trailer & image gallery close out the disc and the Shawscope set as a whole.