The mad genius of Who Framed Roger Rabbit is in part technical. Movies combined live action and animation prior to 1988, but not with this level of crazed interactivity. It’s magic, still, in 2022.

Consider Roger Rabbit mocks the Humphrey Bogart-era detective noirs, of which a child couldn’t understand or grasp. There’s sex, there’s murder, there’s a sexist baby smoking a cigar in a stroller. Somehow, this is rated PG. Then there’s Toon Town, where corporate brands like Mickey Mouse and Bugs Bunny persist under the same legal umbrella, all for the sake of wild Saturday morning chaos.

It’s nostalgia for one crowd who grew up on Warner Bros., Mickey, and foggy crime stories. It’s also placating to a generation then recently groomed on the madness of Warner and the more sedate laughs from Disney shorts.

At the core is still an effective, delightful send-up of classic Hollywood stories, pitting the drained, introverted Bob Hoskins against a world overstuffed with extroverted characters. Roger Rabbit’s villain isn’t so much a murderer (even if he is) so much as a goon out to rob the world of fun. Viewed from the modern perspective, Judge Doom (Christopher Lloyd) represents those execs who chose not to run iconic Looney Tune shorts on endless repeat, sapping that timeless joy from kids.

Roger Rabbit never loses the mystery element. In-between the wild, hyper-active set pieces, the narrative keeps its grip. Impressively too, Roger Rabbit doesn’t feel choreographed or staged. It all flows so naturally, lacking any stiffness despite the precision needed on set to pair the live and post-production materials. That’s crucial in maintaining Roger Rabbit’s zaniness – it has to feel wholly organic and wild. Otherwise, it’s inauthentic to a world occupied by ‘toons. Somehow, Bob Hoskins manages to keep this going, in on every gag, even as he’s seduced by a ludicrously curvy Jessica Rabbit. That’s how classics are made. 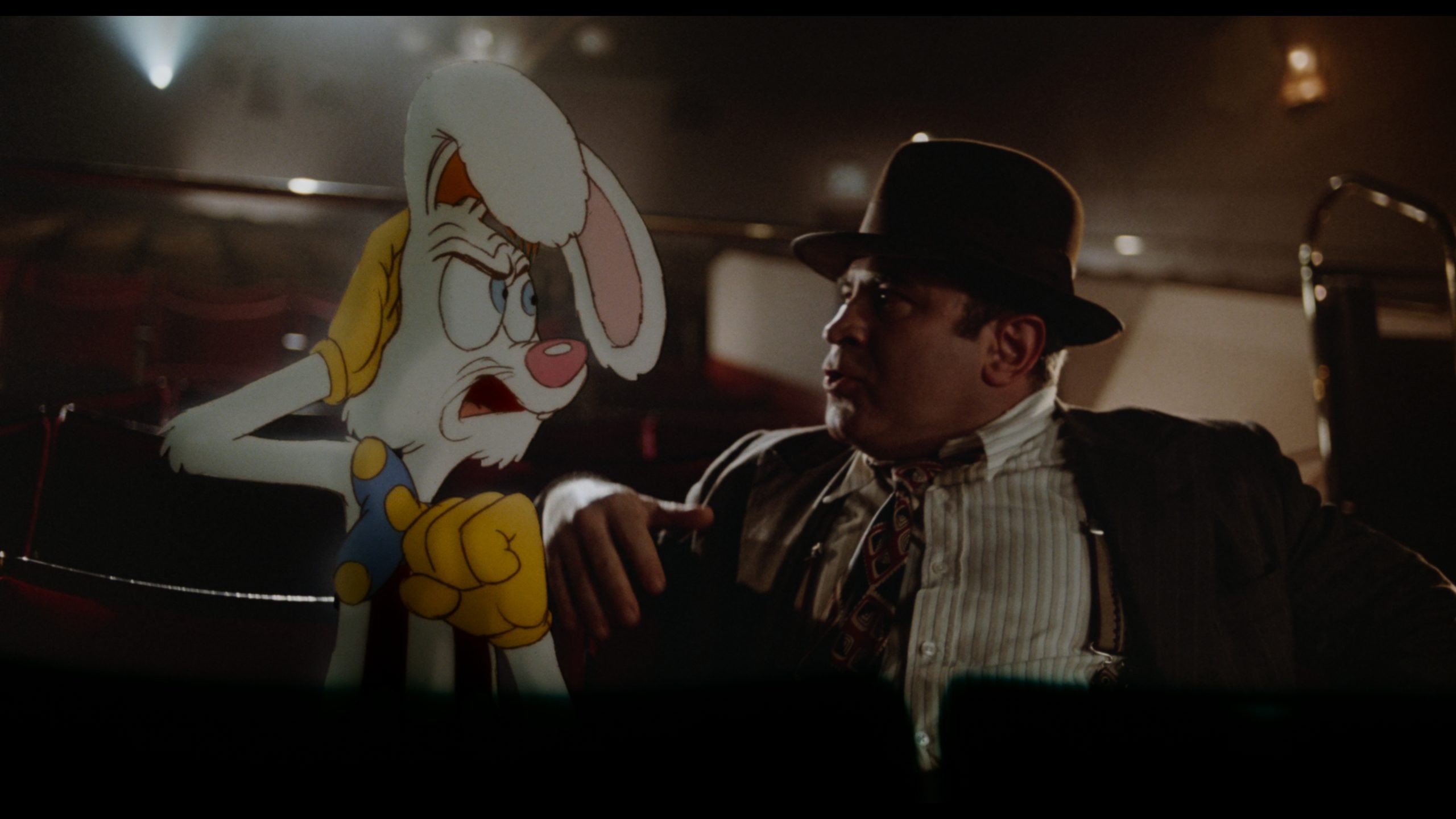 Most disappointing is the HDR pass, the imagery overly dim and lacking vibrancy. There are moments (Jessica’s sparkling dress as lights hit the sequins), yet the contrast looks awfully flat. It’s as if the image is purposefully flattened to make the highlights stick out. While gains over the Blu-ray in resolution and detail are unquestionable, the dim contrast brings Roger Rabbit back to earth. At least the black levels shine.

In a cartoon world, color blooms. Primaries gain weight thanks to the tech, from the darker corners of the city to the brilliant hues making up the animated characters. The same goes for lights around town on buildings. Saturation excels.

Keeping up with Roger Rabbit’s zaniness, this Atmos mix has fun with the action. Characters bounce around the soundstage, utilizing the widely spaced rears, plus adding focus on the heights. Crisp transitions smoothly position each action. Potent ambiance fills bars and clubs. It’s natural too, as if always designed this way, not remixed for the modern era.

The only thing missing is consistent low-end performance. A jazzier score rumbles as the orchestra plucks the bass strings, offering minimal range.

The UHD only keeps the commentary, shared with the Blu-ray, which contains the rest. It’s the same disc Disney issued before. That means a few Roger Rabbit shorts, a deleted sequence, an 11-minute crew featurette, general featurettes, and a great 36-minute making-of that’s still worth a watch even today.

Who Framed Roger Rabbit is more than a technical marvel. It’s a genuinely observant send-up of both animation and detective noirs that appeals to both audiences.