Like a blend of horror and comedy, Executioners from Shaolin blends rebellious kung-fu and a life of comic domesticity, creating a clever, memorable entry in the Shaw Brothers lineage. It’s an answer to how people live day-to-day in these martial arts-obsessed worlds, and the parody potential is taken advantage of.

On a wedding night, foreplay becomes a battle of styles, Lily Li resistant to her husband’s approach, mocking his masculine Tiger technique. Much as he tries, he cannot separate her legs, leaving in disgust and defeat. This, according to Executioners from Shaolin, is how kung-fu experts build a relationship.

Executioners from Shaolin provides a reprieve

The genre, as told by Shaw Brothers, is that of a history defined wholly by determination, skill, and kicks. Nothing else matters in these movies, and therein is why Executioners from Shaolin provides a reprieve. It’s funny, charming, and a delight, normalizing a night where a father studies forms from a book, and his wife knits as she rocks their baby’s crib.

Executioners from Shaolin doesn’t abandon the core, even repetitive principals that fueled ‘70s kung-fu. There’s still a tyrannical government to overthrow, and heroes are defined by their willingness to fight against corruption. The balance between these elements is unusually flawless. Laughs about romance dissipate in a tragic fire, this in the same scene. It’s a back-and-forth emotional lure, one that feels as aligned with the genre as it is mocking the routine.

Importantly, other than a soggy middle act, the action is consistently pure. Choreography delights, lengthy and firm as fights progress. Here to, the comedy becomes a factor, turning toward camp as the villainous leader of the Qing somehow makes his groin not only invulnerable, but a muscle that can trap his opponent’s foot. Soon though, the blood spills, returning Executioners from Shaolin to the exploitation values Shaw Brothers did so well. Thankfully, the script’s focus on character, purpose, and martial arts keeps the interest high too. 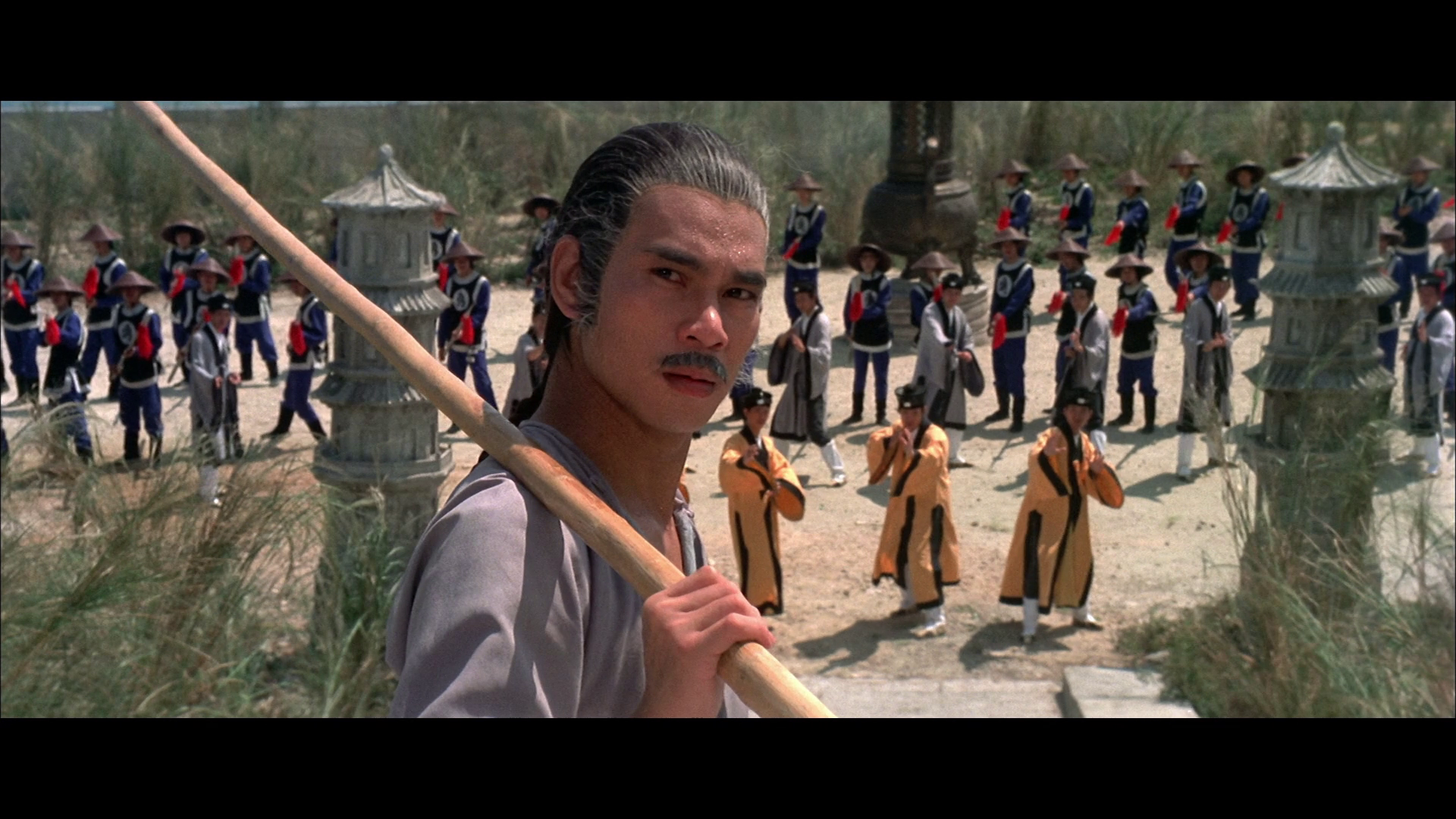 Middling material from Arrow on this film includes suspiciously lackluster grain replication (plus frozen grain) and notable artifacts. Ringing and edge enhancement appear as well, against frequently smudgy textures. It’s uneven though. At times, clarity and detail survive the digital manipulation, but infrequently, making this an unusual master.

Source resolution appears okay, certainly not an upscale, if only a passable HD master. Scenes in forested areas lack definition; medium and long shots suffer the worst in general. While not overly saturated, color does bleed too. Greens and reds overstep their boundaries, often causing more artifacting in the process.

Are there any positives? Certainly. The print itself is in superb condition, and through the decades, lost none of its vivid contrast. Black levels also provide density. Shadows can easily hit pure black.

Both the English dub and Mandarin tracks are in DTS-HD. Routine fidelity keeps dialog clear if coarse. Shaw’s familiar sound effects push the treble past its limits, although the rushing air does push slight bass to give the mono track weight.

Kung-fu in a domestic setting creates an enjoyable romp, then countered by Executioners of Shaolin’s violent drama about overthrowing corrupt leaders. It works.