It’s easy to blame Ron’s Gone Wrong for unfortunate timing. Mitchells vs the Machines released alongside Ron, both movies about tech giants and their personalized robots going haywire, with an eccentric kid who doesn’t belong at the center of each story.

Hollywood does this sometimes. Deep Impact and Armageddon hit in the same year. But, those movies existed for blockbuster spectacle; that Ron’s Gone Wrong and Mitchells happened so near one another is more a sign of the current culture’s effect on adolescence. Although similar, each feels inherently important, even necessary.

Ron’s Gone Wrong also borrows from the ‘80s genre, the “kids hide creatures” stories akin to E.T.. In this case, it’s a broken robot, not a living thing, a ‘bot meant to help kids build friendships. Instead, it only isolates them more. Schooling becomes less about class than recess, because the corporation behind these B-Bots installed charging stations in the hallways where their products sit, waiting to greet their owners on breaks. It’s instantaneous. When children come near, the machines activate, spilling dopamine in the form of virtual friends, shares, and likes. The distillation of modern childhood is quite clever, even darkly funny.

Slickly pieced together in the script, Ron’s Gone Wrong makes these points organically. The theme, the message – all of this blends into the story purposefully rather than existing to make a point. The only time this collapses is that of Andrew (Rob Delaney), a CEO in this for the money alone, oblivious to the true potential. It’s a blatant slap against Mark Zuckerberg and his ilk, delivered without the subtlety elsewhere.

Everything else works. Ron’s Gone Wrong shows a world where children become defined by algorithms. A brief moment has two students walking out of school, their respective B-Bots showing an incompatibility, and the kids going their separate ways. It’s unnatural if real, and in the first act, awkward Barney (Jack Dylan Grazer) isn’t given one of these hot new B-Bots. His single parent dad avoided the tech, as with any parent struggling to keep their own kin away from a cell phone as they near an appropriate age. Barney feels left out, alone, and lost because of a need that’s socially programmed by peer pressure. Those stresses come though so clearly and with enough managed chaos to build a joyful, meaningful animated comedy. 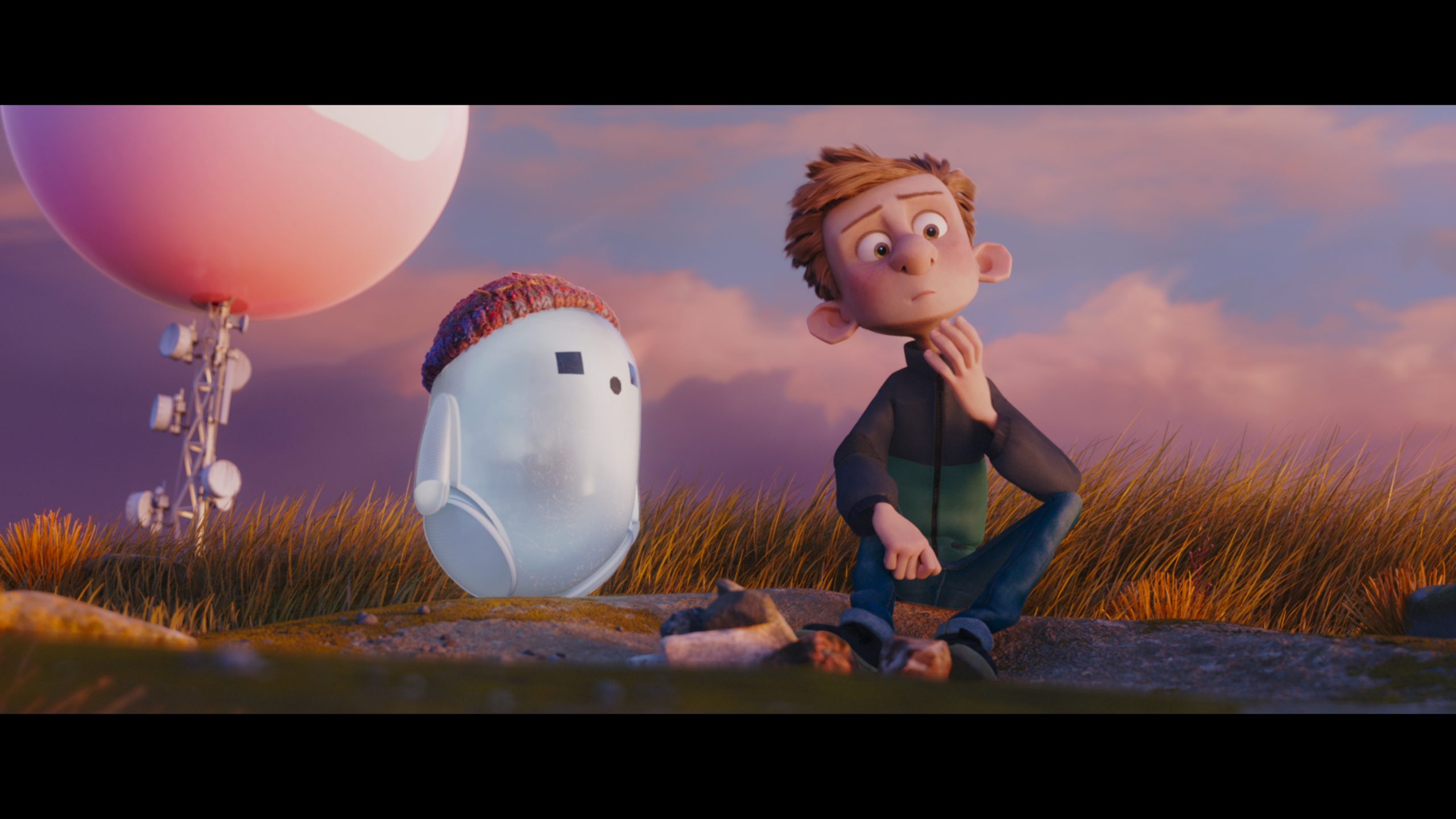 In spot, unsurprisingly saturated in the extreme, Ron’s Gone Wrong is filled with bold moments. The Bubble Bots all glow like intense LED screens, their HDR effect brilliant. In comparison, other colors run a little duller, which is a smart way to sell the story – the brightest color in this world come from the tech.

The HDR doesn’t produce anything too glamorous. Mostly, it’s the B-bots and their lights showing the heftiest brightness. However, that doesn’t mean Ron’s Gone Wrong lacks dimension or contrast. Overall depth excels, and there’s a nice layer of black levels to help keep things bold.

Using the soundstage to fill even the mundane scenes, school hallways and streets keep audio flowing. Ron’s Gone Wrong maintains constant activity, surrounding the visuals with ambiance. As with most animation, the precision is quite remarkable, separating voices between channels, the surrounds equal to the stereos in terms of consistency. Action scenes are satisfying in their motion; the transitions sound absolutely natural. Heights hold thunder and PA systems tightly to their own space.

Sadly, the mix makes only limited use of the low-end. Part of that is on the movie itself, offering rare opportunities, and those barely resonate in the subwoofer.

The Blu-ray keeps the bonuses to itself, but it’s not worth getting up to put the disc in. A pitiful three-minute EPK featuring Zack Galifinakis and Jack Dylan Grazer is marginally funny as the two duel over the generation gap. Second and last is a 16-minute making-of, which is fine if unremarkable.

Another charming way to bring the challenges of a tech-focused adolescence to movie screens, Ron’s Gone Wrong is a smart, clever delight.