A common thread in Shaw Brothers kung-fu epics is fear of invasion or outsiders. Shaolin Temple thrives on this, beginning with anxiety caused by allowing new students onto the teaching grounds. By the end, those fears become truth.

Shaolin Temple finds an enjoyable mix of playful kung-fu humor and well considered drama. Steeped in Shaw Brothers’ choreographed greatness, the final act overcomes a murky, at times even confusing script that struggles to define key characters. What’s always there, however, is an understanding about determination, focus, and purpose. The villains all choose easier methods than those who truly want to better themselves.

Shaolin Temple stands above most

While not the first film to do so, the unorthodox training methods (that include stirring rice or jumping for hours) inspired similar ideas in westernized cinema like Karate Kid. It’s charming, led by the charismatic star Sheng Fu whose short life brought a playfulness to these films, even those with significant stakes. So it is here.

The temple masters allow newcomers into their ranks only because they fear an attack; numbers matter, and so begins a training regimen foreign to these rookies. Other than Sheng Fu, personalities blend together, a fault with this script that’s unfortunate, leading to the first hour dragging along despite the usual genre enthusiasm.

Waiting out the pace means viewing an outstanding finale, some 30-minutes spent in frantic action. The variety in weapons, stances, styles, and location is Shaw Brothers at their best. Director Cheh Cheng headed some 100 genre films, mostly in the ‘70s golden era, and rarely did they disappoint in their brawling. Shaolin Temple stands above most too; that’s hardly faint praise.

More than fisticuffs, the finish plays into every thematic beat. Rigorous beliefs lead to suicides over death by enemy hands. Failure is equivalent to cultural poison, a loss signifying one didn’t train hard enough. Blood becomes prevalent in a previously G-rated combat movie to sell how serious those faults are. Of course, each key training area becomes a fight pit, including a spiked floor. There’s another battle on steps, and that’s brilliantly designed. Quick flashbacks connect to what seemed like monotonous repetition, integrating clips into the current clashes. It’s stellar. 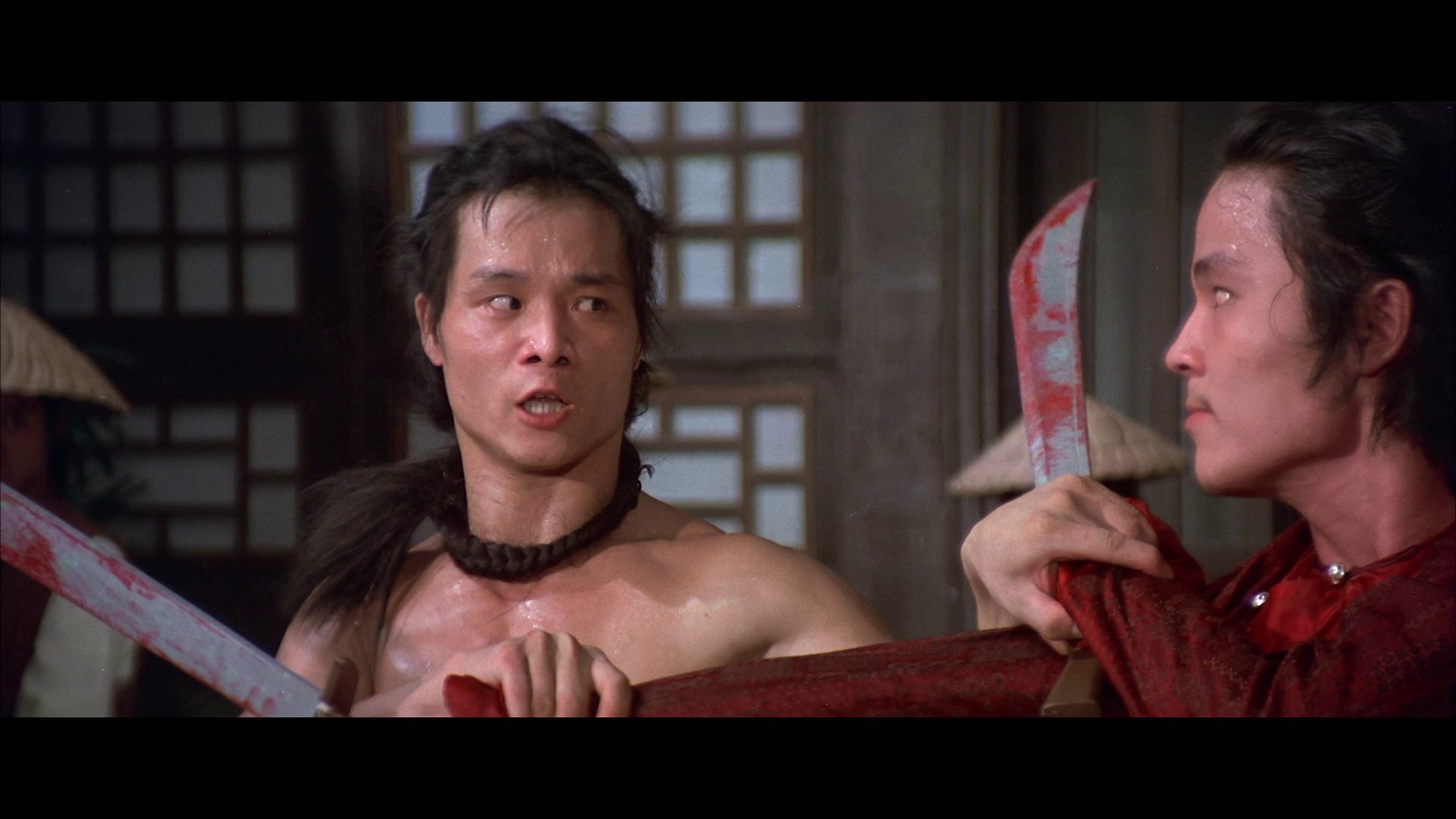 Unfortunately hit with a substantial case of DNR, this nearly grain-less presentation carries with it an ugly, smeary, and waxy appearance. Skin doesn’t look textured, but plastic. aside from the close-ups. There, some detail can escape, if far too little for what looks like excellent source material. Frozen grain is noticeable on multiple occasions, in addition to blocking artifacts. This further sours an otherwise high-resolution scan.

Color is plentiful as the temple dress code includes bright red cloaks that stand out from the slightly pale surroundings. For instance, flesh tones flatten, and the green landscapes lack intensity. It’s overall dry despite the varied palette, including golden temple rooms and blue seas.

At least there’s pep to the contrast, suitably bright, and the perkiest element on the disc. Depth is then achieved via the sustained, consistent black levels, barely off from pure black and dense enough to add weight.

Surprising bass helps the score avoid sounding wholly flat. Even Shaw’s classic punch effects bring a light power. Treble doesn’t hold up quite as well, wobbly at the peaks, if not unusually so. That transfers to the scratchy dialog too, static emanating from most lines.

Note there’s an English dub as well as Mandarin.

Historian Tony Rayns gives an appreciation for director Chang Cheh that lasts 36-minutes. Profiles on actors Ti Lung and David Chiang are sourced from 2003. An SD version of Shaolin Temple is offered (with a better master, arguably, despite the print faults), with alternate credits, a trailer gallery, and stills following.

Shaolin Temple’s fable of dedication and fears of outside influence overcome a crowded cast that struggles to define the main characters.