Sabrina co-stars Audrey Hepburn and William Holden reunite a decade later for the delirious romantic comedy Paris When It Sizzles. The Hollywood stars have a ball in Hepburn’s most clever and underrated film, poking fun at themselves and their images. A playful, fun screenplay by George Axelrod mocks the filmmaking process with a dazzling array of Hollywood in-jokes and intelligent gags.

The light comedy is a sly send-up of Audrey Hepburn’s earlier films and the movie business itself. Met with mixed reaction upon release, both critically and commercially, Paris When It Sizzles was ahead of its time as a satire working on multiple levels. That didn’t sit well with audiences of the 1960s, expecting a straight romantic opus starring the popular Audrey Hepburn. Nominally a romantic comedy, the film’s complex, whimsical meta structure took many of her fans by surprise. The romance is sweet but feels like an afterthought if you don’t buy the banter between its two stars.

A decadent Hollywood film producer (Noel Coward) demands a film script from Richard Benson (William Holden) within three days. The overpaid, alcoholic screenwriter has a title, “The Girl Who Stole The Eiffel Tower” and little else written down. The studio sends him the sweet ingenue Gabrielle (Audrey Hepburn), a typist who takes down his fevered script ideas.

Locked together in Benson’s apartment for three days, he bounces preposterous plots off of Gabrielle as they start working closely together. He’s under creative stress and she’s exasperated by his outlandish behavior. Gabrielle is often placed in the center of his wild ideas, imagined on the screen in elaborate set pieces. They start matching wits as the two grow ever closer and closer, concocting insane film plots.

Hepburn and Holden have immense fun in the roles. Holden even shows up at one point playing a b-movie vampire. It’s clear as day their characters are growing in love, playing out an amazing variety of characters as Benson’s movie-within-a-movie keeps mutating from musical to comedy to thriller to even monster flick. Based on an earlier French film, Paris When It Sizzles is an unqualified gem.

Shot on location in Paris, the movie is a gloriously decadent Hollywood production with cameos galore. Tony Curtis plays himself, Marlene Dietrich shows up for a split second, they even get Frank Sinatra singing a few unaccredited bars. It’s a testament to Hollywood’s studio system, though the film’s box office failure helped erode the system’s credibility and paved the way for more maverick filmmaking as Paramount started losing money. 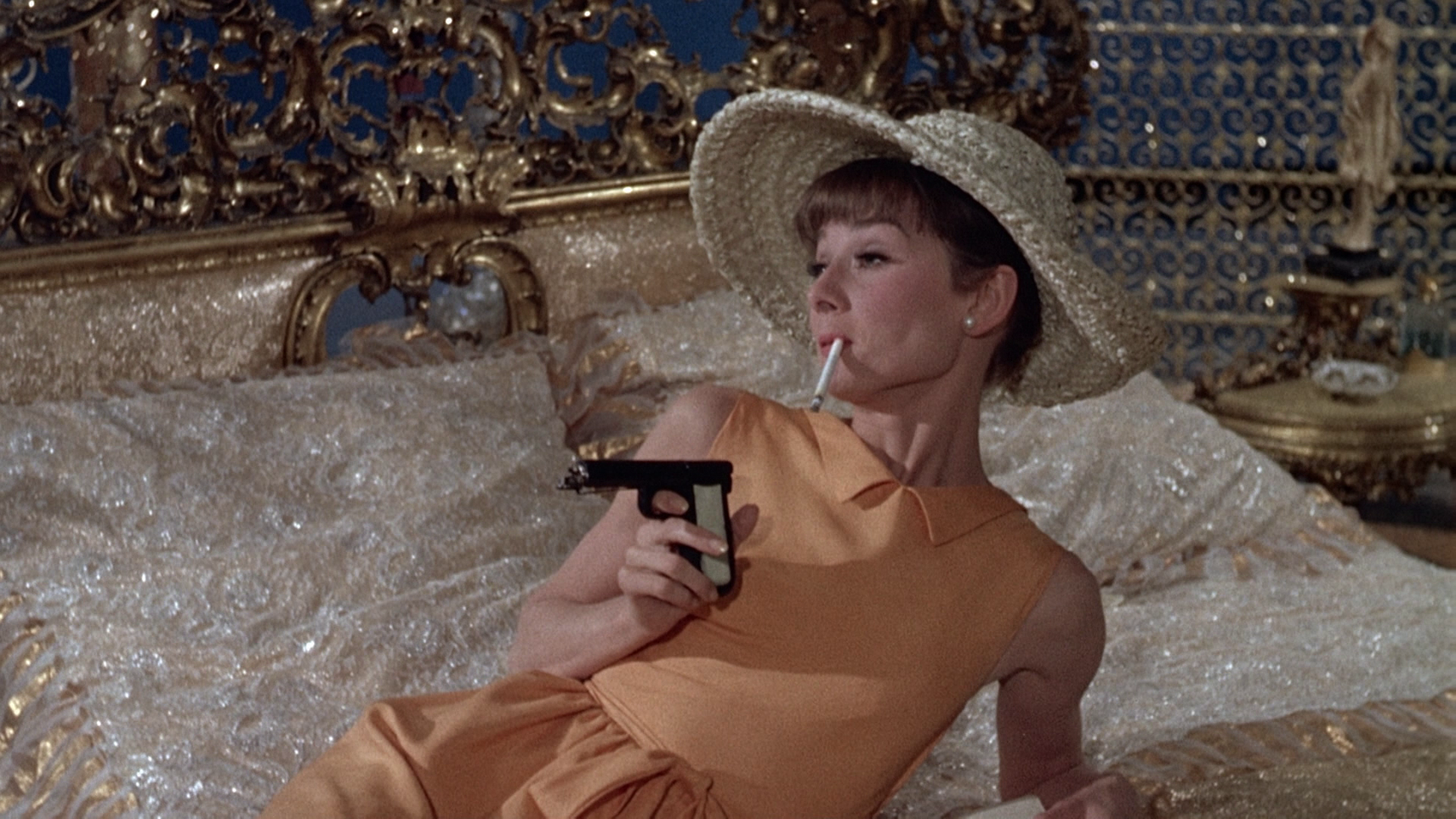 The 1964 romantic comedy is presented in reasonable HD condition, definitely better than the middling DVD, but not on par with Paramount’s most recent efforts. The Blu-ray is a more-than-serviceable job which could improved.

The 1.78:1 video is a tad soft in select scenes from what is likely an older film transfer. Paris When It Sizzles could look somewhat better with a legitimate 4K scan like My Fair Lady. That is probably not in the cards considering most view the light comedy as one of Hepburn’s lesser films.

Almost certainly struck from the original camera negative, the Technicolor elements are in fine shape with a solid contrast and even black levels. Flesh-tones maintain a healthy appearance. Color fidelity is unremarkable but largely well preserved. Only hints of debris and optical detritus mar the appreciably clean elements.

The best news here is that Paramount has employed a transfer devoid of filtering and ringing, rare for their earlier HD efforts. This may well be the same transfer struck when they released Paris When It Sizzles on DVD, almost a decade ago. The 1080p video consistently honors the original celluloid with excellent grain reproduction.

The main feature runs 110 minutes on a BD-50. The high-bitrate AVC encode smoothly captures the thicker grain structure and evident detail. It’s a technically astute mastering of the film elements by Paramount.

An uncredited Frank Sinatra sings a few lines as one of many gags. It’s not an overly dynamic recording but dialogue is sharply delivered without problems. The music has limited extension though the mono soundstage is fairly punchy.

Paris When It Sizzles is released exclusively on Blu-ray as part of Paramount’s Audrey Hepburn 7-Movie Collection. The eight-disc collection includes War and Peace, Sabrina, Roman Holiday, My Fair Lady, Funny Face, and Breakfast At Tiffany’s. Nothing but the theatrical trailer is included as a bonus feature for the movie, ported over from the original DVD.

Paramount provides a separate digital copy for every movie in the 7-Movie Collection. Each digital copy redeems in HDX quality on either VUDU or iTunes. It should be noted that Paramount isn’t part of Movies Anywhere, so the digital copy doesn’t port to other providers.

Paris When It Sizzles Theatrical Trailer (02:47 in SD)

Paris When It Sizzles

Audrey Hepburn and William Holden have a ball in this romantic comedy spoofing the movie business and screenwriting process, an overlooked gem from the 1960s.