No Time to Die is almost comic in its self-referential humor, nearly piercing the fourth wall. Knowing Daniel Craig is finished with his run as Jame Bond, he’s slowly lured back into the throes of MI6, pulled from a luxurious, relaxing life almost against his will. A sense of duty compels him to fight against a global threat, which in real world context, is like the movie studio pleading for one more go.

Delayed repeatedly by the covid pandemic, No Time to Die, ironically, deals in a potentially lethal virus, although this fictional one is robotic. Nanobots, specifically, and the story threads through previous Craig adventures (albeit some more than others) smoothly, understandable even without prior knowledge.

After spurts of hectic car-flipping, No Time to Die slows

This becomes a decidedly personal Bond saga. Global threat or not, No Time to Die features Bond’s isolated, womanizing, hard drinking side, but also seeks to humanize a man who spent over a decade gunning down super villains. It’s successful drama, finally grounding a pure movie character in emotional weight, as the stakes around him grow ever more consequential.

Action scenes play less of a memorable role this time out. Mostly, it’s the locations more than scale that impress as Bond swerves vehicles off the road, improbably dodges bullets by the hundreds, and otherwise maims people. Outside of No Time to Die’s introduction that sees Bond swinging off a bridge, it’s generally mundane. And again, personal. After spurts of hectic car-flipping, No Time to Die slows. The kills then necessitate a one-on-one stare down because these people dared to involve Bond’s romantic side.

Safin (Rami Malek) is given one grandiose speech to explain his plan to infect the planet through a DNA-targeting nano tech. If there were reason to delay No Time to Die aside from financial concerns, it’s this conspiratorial idea, feeling all-too similar to Facebook loons preaching about Bill Gates wanting to depopulate Earth. Bond overcoming his mad plan comes across as prescient, if again acknowledging an outside reality, however unintentional.

No Time to Die sends this Bond into retirement with the same glamour as any other. The cars, the women, and drinks, the suits; Craig continues to look the part. There’s an underlying sense these things matter less now though. He’s less impressed by ostentatious material objects; he hardly notices. Bond’s focus stays entirely on what he’s fighting for: a woman, the first to break his masculine, even sexist playboy-ism. It works, as much as it entertains. 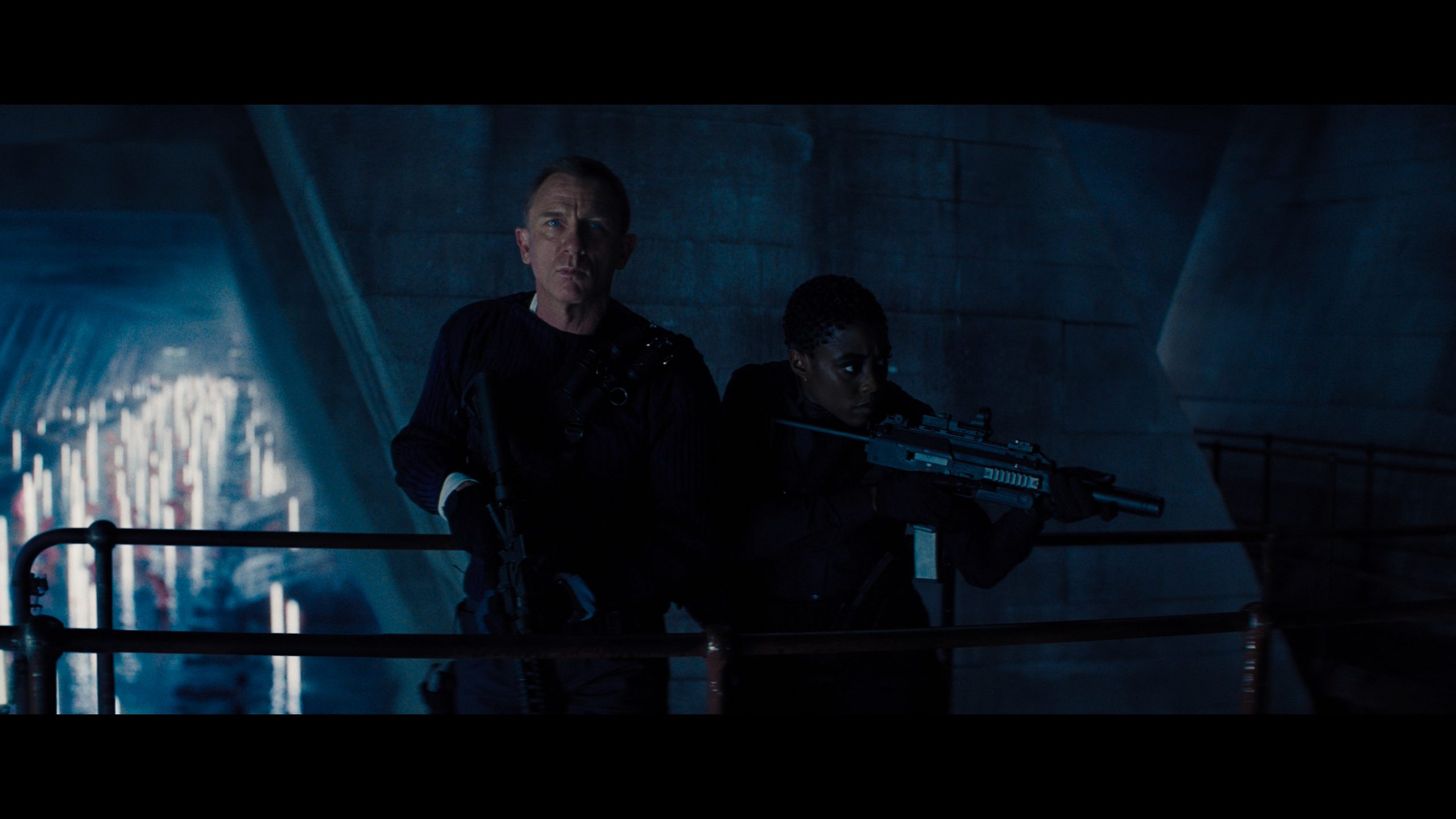 With sharpness and a gloss befitting the Bond franchise, this marvelous 4K-finished production brings out the full beauty in every location. Opening scenes, with stone structures, grassy hills, and rocky cliffs look ridiculously pure. Definition is extreme, and totally natural. Facial texture matches the brilliant sharpness, resolving every pore and every hair. Light grain easily resolves.

Generous contrast shines down onto the scenery, intensely bright, but without any clipping. Black levels waver a touch, primarily due to the color grading that skews them toward blue. They have density, if not to the fullest black. Deep shadows do happen, if only when the intent allows them.

The palette veers between heavy warmth and dense cold, both grades dominating their respective scenes. Flesh tones wander in accuracy, rarely on point, although the deep color Dolby Vision pass gives every hue weight and heft. In that, it’s attractive.

While a bit lower in volume, a quick adjustment adds the required low-end intensity to action scenes. Explosions rip through the room, shaking and rumbling to the expectation of any modern mix. Additional heft comes from vehicles collisions, club music, and gunfire, the design such that variances are obvious and appropriate to the scene.

Atmos effects sweep through the soundstage. Bullets rush past, using the heights splendidly. The first shoot-out places Bond inside a bullet proof car, shots hitting the windows all around as the camera switches positions. Accuracy is reference grade, and audio moves between channels almost constantly.

On the UHD, bonuses begin with a breakdown of the Metera sequence. An EPK on the action is followed by another EPK on the location shoot. Set design is next, with a lengthy (and the best) bonus focused on Craig playing Bond. The latter runs 46-minutes, and it’s a great send-off, celebrating his part in the franchise.

No Time to Die

No Time to Die toys with the Bond legacy by becoming self-referential before diving into expensive, high-grade international action.